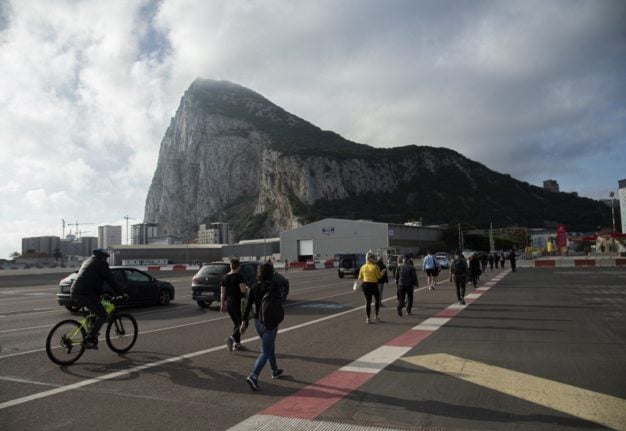 Spaniards cross the border between Spain and Gibraltar to go to work. Photo: Cristina Quicler/AFP

Spanish border guards have reportedly started implementing stricter border checks on non-EU citizens leaving The Rock for Spain, in a surprise escalation that has surprised everyone including Gibraltar’s Chief Minister Fabian Picardo.

Tweeting this week, Picardo said that the Gibraltarian government has received “reports of a change in approach to Non-Gibraltarian, Third Country Nationals, crossing the frontier into Spain,” and added that he “will be taking up these issues with the UK and Spanish authorities.”

We are receiving reports of a change in approach to Non-Gibraltarian, Third Country Nationals, crossing the frontier into Spain. We will be taking up these issues with the UK and Spanish authorities. pic.twitter.com/Xl1nnITHjR

It is believed that Spanish authorities are now demanding non-EU nationals travelling on foot, including British passport holders, are able to demonstrate both travel and accommodation plans with bookings before allowing them to enter into Spain.

Similar checks are not being made on travellers crossing the border by car, however, The Local understands.

Yet, as of Monday reports have emerged that many British citizens, even Gibraltarian blue card residence permit holders, are being denied entry in Spain, but not non-EU nationals – including Britons – who already have official Spanish residency, nor Gibraltarians with red residence cards.

The Spanish Policía Nacional, however, claims it is maintaining the same border checks it always has and that nothing will change until a full Brexit agreement is finally made.

Negotiations on a deal outlining Gibraltar’s future relationship with the EU are ongoing, and it remains to be seen if Gibraltar – a British overseas territory that voted overwhelmingly to remain in the EU by 96 percent – will have some kind of special arrangement to maintain frictionless access to the Schengen area.

READ MORE: What are the reasons for being denied entry into Spain?

A Gibraltar-based source familiar with the negotiations explained to The Local that “we have had temporary bridging measures agreed with Spain about how the frontier operates” until an agreement is made, but that “it seems these bridging measures were not respected” this week.

On the ground many Llanitos (as Gibraltarians are known) believe the stricter border checks coincided with replacement border guards brought in to cover Easter holiday breaks who were unfamiliar with the bridging measures, or that they could be related to the recent arrival of two nuclear submarines (one British, one American) that docked in Gibraltar.

Maintaining a fluid border arrangement is essential for both Spaniards and Gibraltarians as over 10,000 Spaniards cross the border to work in Gibraltar every day, and many Brits based in Gibraltar have family and property in Spain.

But domestic politics over the border could also play a role in the future relationship.

If, as seems probable, the Spanish right wins the next general election, many in Gibraltar fear that any deal that is eventually made will be rendered useless and immediately renegotiated, at best, or, at worst, torn up.

The Spanish right has long used blood and soil nationalist rhetoric against Gibraltar to whip-up political support in the Campo de Gibraltar area of Cádiz province, one of the poorest parts of Spain.

Although it is hoped a deal based on the framework agreement signed by both Britain and Spain on December 31st 2020 will be made at some point in the first half of 2022, it seems Picardo and his government are covering all their bases and preparing for the potentiality of a no-deal scenario.

Some weeks ago, Gibraltar’s government began advising citizens on how to prepare for and mitigate the consequences of a potential failed negotiation, and is expected to provide more information on the increased border checks at some point this week.

This is not the first time there has been confusion at the Spain-Gibraltar border, however.

In 2021, The Local reported how a British national was refused entry into Spain because of a missing passport stamp that Spanish border officials had themselves forgotten to stamp, highlighting the confusion and potential misunderstandings that can happen while negotiations are still ongoing.

READ ALSO: Passport stamp or scan? What foreigners at Spain’s borders should expect