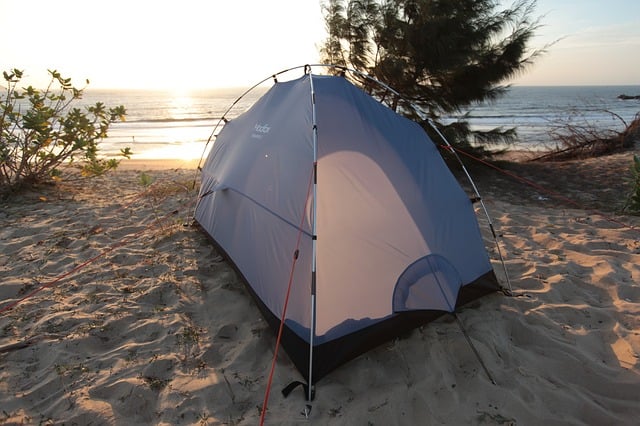 Can you camp on the beach in Spain? Photo: Duncan Tran / Pixabay

It’s the ultimate Spanish camping holiday dream, setting up your tent right on the beach and waking up to a spectacular coastal view and the sound of the waves gently lapping against the shore.

But is this even possible or legal? Are you actually allowed to camp or sleep at any beaches in Spain?

The short answer is that unfortunately wild camping on the beach in Spain is not allowed.

Why is it not allowed?

The reasons for restricting camping on the beach range from health and safety to security and respecting the environment. This means that there are very strict regulations when it comes to camping or sleeping on the beach.

Is camping on the beach ever allowed under specific circumstances?

As mentioned above, generally wild camping on the beach, meaning not at a designated campsite, is not allowed in Spain. You are however able to request specific permission from the local authorities to do so under very specific circumstances.

Keep in mind though, according to the Spanish Federation of Campsite Entrepreneurs (FEEC) the local authorities rarely grant such permission, unless you have a particular reason or need to camp by the beach, such as for environmental research. Simply camping on the beach for tourism will not be allowed.

What about sleeping on the sand without a tent?

How about if you don’t intend to camp on the beach, but you just want to sleep on the sand in a sleeping bag? Unfortunately, this is generally not allowed either and if you’re spotted, you could be fined by the local Ayuntamiento or Town Hall or told to move on.

But it’s not just a question of being fined, it’s also a health and safety risk to sleep on the beach. If you’re in an urban area you’re at risk of people stealing your belongings while sleeping.

Big tractors and other vehicles will often also drive along the beaches at night or in the early hours of the morning, cleaning and raking the sand, and may not see you if you’re sleeping there in the dark.

While changes in the tides are minimal in Spain, depending on where you are, tides and big waves could also be a risk factor.

Can I park my campervan or caravan next to the beach?

OK, so you can’t camp in a tent on the beach or sleep directly on the sand, without the risk of incurring a fine, but what about parking your caravan or campervan right next to the beach and still waking up to that incredible sea view?

As mentioned above, wild camping in Spain is not allowed, even in a campervan, you must find appropriate campsites to stay the night.

However, there is one main caveat to this rule. You are allowed to park your campervan anywhere where parking is permitted and sleep in it for the night, providing that you are not showing that you’re camping there. This means that you can’t set up awnings, tables and chairs or other camping equipment, it must look as though you are simply parked.

General Traffic Regulations state that they “prohibit parking and circulation, as well as camping and camping sites, 20 meters from the beach in an urban area or 100 meters in a rural area, counted from the seashore”.

This means that as long as it doesn’t look like you’re camping, you may still be able to find an official parking area that meets these rules and still offers a stunning sea view.

Read here to find out the campervan and motorhome rules for each region in Spain and how long you’re permitted to park in one place.

Places where you can still camp near the beach

The good news is that camping is very popular in Spain and there are hundreds of campsites all over the country. The latest figures available showed that there were 527 campsites across the country in 2020 (in 2019 there were over 700).

Many of these campsites are indeed located along the coast and several are in fact right next to the beach. This means that you can still fulfill that dream of unzipping your tent door in the morning and waking up to that fabulous seaside view.