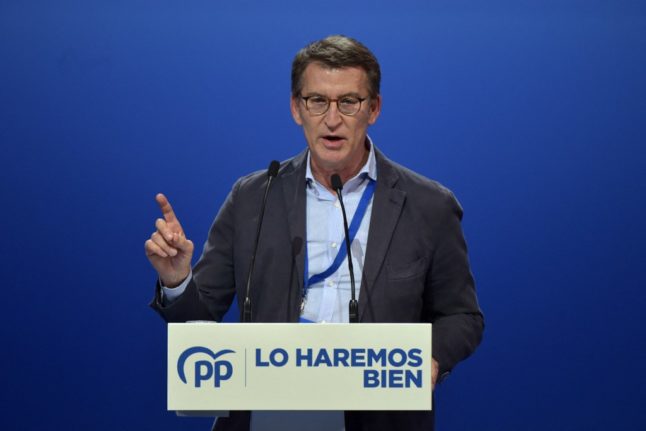 For the past 13 years, Feijóo, 60, has run the northwestern Galicia region, earning a solid reputation as one of the best-respected leaders in the right-wing opposition PP.

His overwhelming election as leader with 98 percent of the vote at Saturday’s party conference came as the PP emerges from one of its worst-ever internal crises, toppling his predecessor Pablo Casado ahead of a general election due by the end of 2023.

“This election is only the beginning because what is really important now is to continue together so that Spaniards elect us to govern their future,” he said, thanking the party for electing him.

A keen fisherman who became a father for the first time at 55, Feijóo is often described as an “ordinary man” with very good manners.

Born and bred in Galicia, he’s spent most of his political career there and when he ran for regional leader in 2009, was elected with an absolute majority — repeating the feat in three subsequent elections.

“Feijoo is the best leader at a complicated moment,” Jorge Azcon, PP leader in the Aragon region, said this month.

“He’s a serious politician who is the opposite of the frivolity we are used to seeing… He brings people together and doesn’t cause divisions.”

In a survey in March, Feijóo was found to be Spain’s most respected political leader. News of his likely appointment calmed the storm around the party, which quickly stopped haemorrhaging votes.

“Everyone in the party believes Feijóo is the right person,” said Fran Balado, a Galician journalist and author of the book “Feijóo’s Journey” (2021).

“He’s a moderate because he manages to attract progressive voters and he’s a pragmatist whom people trust,” he told AFP.

From law student to civil servant

Born on September 10, 1961, in the village of Os Peares, Feijóo grew up in a working class family. His father worked in construction and his mother ran a grocery shop.

A studious child described as “responsible and obedient”, he read law in Santiago de Compostela, hoping to become a judge. But when his father was left jobless, he pitched in to help, becoming a civil servant in 1985.

His interest in politics was piqued while at university, when he would watch political debates on television.

But it was only in 1991 that he got his foot on the political ladder, taking a job at Galicia’s agriculture ministry with a politician who later became Spain’s health minister and who, in 1996, took Feijóo with him to Madrid.

There, Feijóo ran Insalud, Spain’s national health service at the time. In 2000 he took over as boss of Correos, the national postal service, until returning to Galicia’s regional administration in 2003 as head of public works and housing.

In 2006, he became regional head of the PP, a party he had only joined a few years earlier. At the time in crisis, Feijóo led the faction to victory in 2009 and has ruled Galicia ever since.

Although largely unknown, he won plaudits for cutting excess spending, although he never made cuts to health and education, says Balado.

Cards close to his chest

Always one to play his political cards close to his chest until the very last minute, he had been widely expected to run for the PP’s national leadership in 2018.

But he surprised everyone when he didn’t, breaking down in tears as he said being Galicia’s leader was his “highest political ambition”.

Several years earlier, he raised eyebrows when El País newspaper published photographs of him from the mid-90s on a boat with Marcial Dorado, a cigarette smuggler later convicted of drug trafficking.

Feijóo admitted they were friends at the time but said he had no idea about Dorado’s business activities.

In Galicia, he has managed to keep far-right party Vox at bay, despite its national resurgence. Vox has not held a single seat in the region’s parliament.

Always very discrete about his private life, Feijóo is currently in along-term relationship with top business woman Eva Cardenas, whom he met when she was running Zara Home. Together they have a five-year-old son, Alberto.

He is known to be an aficionado of traditional Galician dishes, notably goose barnacles and fresh spider crab, and is also a football fan, following local team Deportivo de La Coruna.