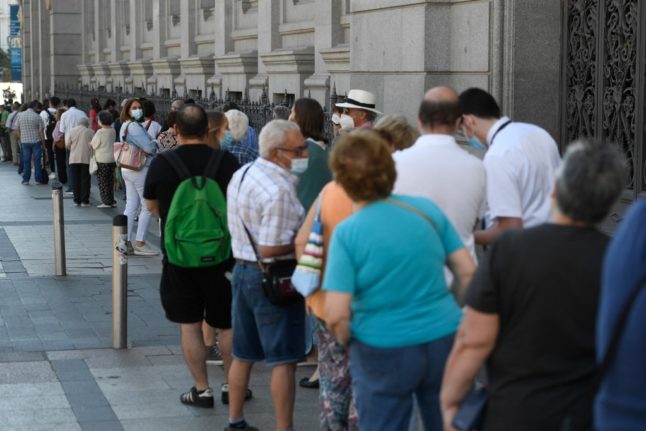 Perhaps it’s not that the Spanish don’t know how to queue, just that they do it differently. (Photo by PIERRE-PHILIPPE MARCOU / AFP)

There are many different clichés said about the Spanish. One of the most common that always seems to come up is that they don’t queue properly, and are instead accustomed to just forming disorganised clusters or even pushing in.

Some even go as far as saying that the Spanish don’t know how to queue or are allergic to it and, if there isn’t some type of indication that you need to queue, they won’t do it.

But how true is this stereotype and is queuing in Spain the nightmare that it’s portrayed to be?

It’s generally true that the Spanish don’t like queueing (who does, really?) and may try to reduce their waiting times in a country where things do tend to go slower.

It’s not uncommon to see couples or families queuing at different counters to buy tickets or tills at the supermarket to see which is the quickest, then joining up together when the first one gets their turn.

You may also notice that if someone meets a friend or someone they know in the queue, they will often push in, to queue with them.

And occasionally an abuelo or abuela (grandfather or grandmother) will sneakily jump the queue because they can get away with it.

While this may be seen as acceptable in Spain, it makes some foreigners very annoyed.

It may be typical to see chaotic jumbles of people standing around in no specific order to catch the metro or bus (and many people still don’t know how to wait to get on before others have gotten off).

But this lack of queuing doesn’t apply to all situations in Spain. 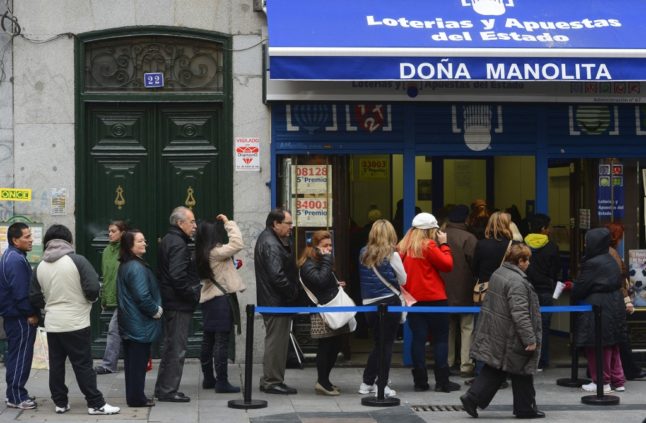 People queue outside the famous lottery office Doña Manolita to buy the “Fat One” (el Gordo) lottery tickets in the centre of Madrid on December 18, 2012. (Photo by PIERRE-PHILIPPE MARCOU / AFP)

The queues may not be systematically as orderly as in the UK or northern European countries, but that doesn’t mean that the Spanish don’t know how to hacer la cola (queue).

In places such as offices and banks where many people are just standing around, it may not seem like there’s any queuing system in place, but there actually is, and it’s really quite clever.

When you arrive somewhere and see a cluttered mess, simply call out “¿Quien va el último?”, translated as “Who is the last?”.

Someone will answer you and you will know that it will be your turn after that particular person.

Don’t forget that when the next person comes along after you and asks “¿Quién va el último?”, it will be your turn to answer “¡Yo!” (Me!).

This nifty way of queuing means that you don’t all have to stand in one line and wait, you could find a comfy chair to sit on, go and stand near the air-con if it’s hot or go and chat to a friend you might spot who is also waiting.

Perhaps it’s not that the Spanish don’t know how to queue, just that they do it differently. Dare we say it’s actually better than the British or northern European way of standing in an orderly line? Is what is said about Spanish queueing just another unfair stereotype catering to Spain’s image abroad of being disorderly and undisciplined?

It’s also quite common in many places in Spain to collect a number or a ticket in advance, which then flashes up on a digital screen when it’s your turn.

This method can be seen everywhere from deli counters for buying cheeses and fresh fish to local post offices for sending parcels. 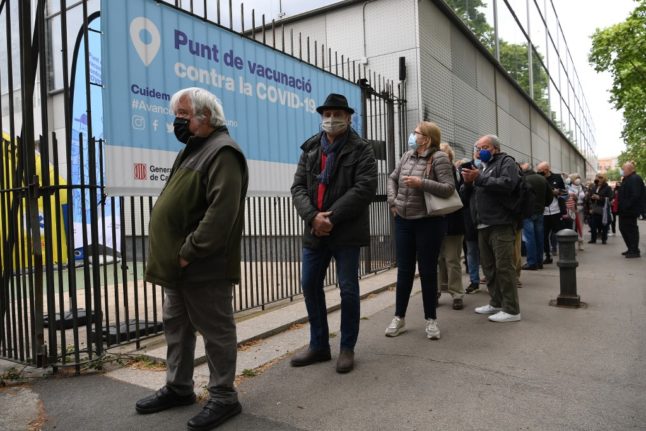 People queue outside a vaccination centre on April 26, 2021 in Barcelona during a vaccination campaign to fight the Covid-19 pandemic. (Photo by LLUIS GENE / AFP)

Shift during the pandemic

The Covid-19 pandemic took queueing to another level in a country where any form of bureaucracy already involved waiting.

Queuing became necessary for everything from waiting outside supermarkets, hospitals, shops, restaurants as only a certain number of people were allowed in, to having specific places for each person to stand at the supermarkets.

Queuing has become so common during the pandemic that generally speaking, Spaniards have become even more adept at it and now seem to form queues everywhere (even bars!).

“¿Quien va el último?” and numbered tickets are still widely used in Spain, but the Spanish also appear to have a newfound appreciation for standing en fila india as they call it (in line), as well as doing it their own way.