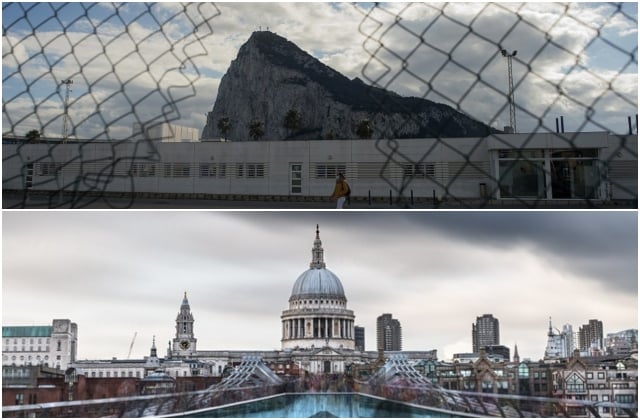 The impact of Brexit on Spain - either directly on its economy or indirectly through events in Gibraltar or the UK - is undeniable. Photos: Jorge Guerrero/AFP, Andrés García/Pexels

Brexit costs each Spaniard €292 a year

Even though the economic impact of Brexit is mainly being felt in the United Kingdom (4 percent GDP loss in the long term according to recent estimates), most Spanish regions are also feeling the consequences of the UK’s exit from the EU.

One would think that the most affected part of Spain would be the Valencia region, home to 85,000 resident Brits and Benidorm, Alicante and other coastal spots which have long been the favourite holiday destinations of UK tourists.

The Valencian Institute of Economic Research (Ivie) has calculated that the drop in real GDP in the eastern region of five million people has been 0.07 percent, representing an average loss of €253 a year for each Valencian.

Interestingly however, the study focused primarily on the commercial impact of the drop in trade between Spain and the UK, and in the northern industrial regions of Navarre and the Basque Country inhabitants are losing a lot more in relative terms, €621 and €615 a year per capita respectively.

According to Ivie, Spain’s overall annual GDP loss as a result of Brexit is 0.08 percent, around €13.6 billion (€292 per capita), and in general the closer the regions are to the UK (those in northern Spain), the larger the impact, given that trade tends to increase based on proximity.

Brussels coughs up to help Spain confront impact of Brexit

Continuing on from the previous section, the European Commission (EC) gave the green light on March 15th for Spain to receive €84.5 million as part of a fund to support the economic sectors and regions that are suffering the most from the effects of Brexit.

That’s roughly a tenth of the €812 million that 12 Member States will receive this month and to which will be added an additional €1.26 billion already approved for April 2023, of which Spain will be allocated another €130 million.

Last February, Spanish authorities for the fourth time extended the period of validity of UK driving licences in Spain until April 30th.

As this latest deadline nears, negotiations over the mutual exchange of licences continue with no deadline in sight after more than a year of talks.

There hasn’t been any update from the UK embassy in Madrid since they confirmed the extension on February 23rd 2022.

UK licence holders in Spain can expect either an answer to whether they will have to sit their practical driving exams in Spanish soon or they will get another extension to the validity of their UK licences, the latter the more likely outcome based on previous events.

No freedom of movement equals no travel for unvaccinated Brits

The Spanish government has again extended temporary restrictions for non-essential travel from most third countries for another month, until April 30th 2022, the umpteenth extension over the course of the pandemic.

What this means is that most unvaccinated non-EU/Schengen adult travellers – including British tourists who are neither vaccinated nor recently recovered – can still not visit Spain for tourism.

It’s an indirect consequence of Brexit as unvaccinated EU tourists can visit Spain given their freedom of movement rights, something Britons who don’t reside in the EU no longer enjoy.

Spain was willing to bend its Covid travel rules to make an exception for unvaccinated British tourists for some months in 2021, but there is no sign as yet that they’ll be willing to do so again.

Brexit has been a huge pile of rubbish for Gibraltar

In early March, as many as 6,000 tonnes of rubbish were piled up in The Rock, an unforeseen consequence of Brexit for most in Spain and the UK.

Until recently, Gibraltar had an agreement with nearby Spanish waste disposal companies to take away and process the small British Overseas Territory’s garbage under the EU framework.

But in February 2022 this straightforward deal broke down, as negotiations over Gibraltar’s relationship with Spain post-Brexit continued.

The garbage piled up over the following weeks, environmentalists warned of the possible environmental catastrophe for the whole bay area and Gibraltarian authorities planned to start storing all the waste in World War II tunnels.

The Cádiz-based organisation previously responsible for collecting Gibraltar’s rubbish has since agreed to transport the 6,000 tonnes of rubbish to a landfill in Los Barrios, but any breakdown in the ongoing talks regarding the transport of goods and people at The Rock could cause another holdup.

Staff at Spain’s Embassy and Consulates in London, Manchester and Edinburgh have been on strike since March 14th over calls for better salaries and work conditions.

Although the strike has left hundreds if not thousands of Spaniards without the possibility of renewing their Spanish passports in the UK, it is also affecting the issuance of residency visas for Britons who want to move to Spain (now a requirement for them post-Brexit) given that there’s only a minimum provision of services currently.

Spanish consular staff have for months denounced the precarious situation in which they find themselves, their understaffed offices and salary freezes over the past thirteen years aggravated by the impact of Brexit on the British economy.

“In the last year alone, 21 workers have left their jobs permanently,” embassy staff wrote on their change.org petition with the aim of getting Spain’s Foreign Affairs Ministry to act.

“Until these posts are filled (a process that takes several months), the work falls on the rest of the workers, who cannot cope”.