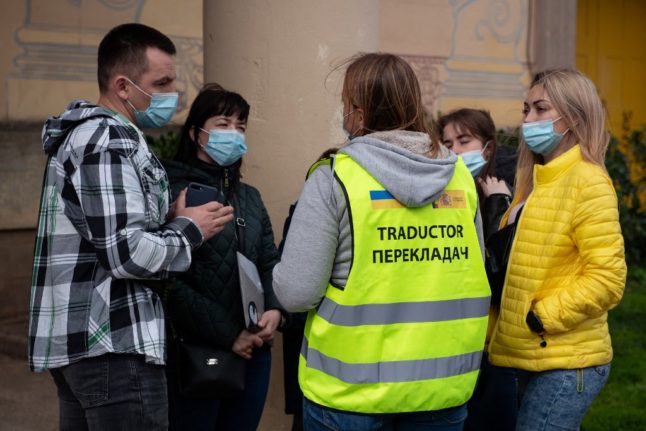 A translator speaks with Ukrainian refugees outside a reception centre in Barcelona on March 18, 2022. Photo: Josep Lago/AFP

After fleeing the war in Ukraine and reaching Warsaw by car and on foot, 22-year-old Khrystyna Trach had no idea how she would make it to Spain where her sister lives.

Then she heard about a convoy of Madrid taxi drivers who had come to Poland to deliver aid and ferry a group of 135 Ukrainians from a Warsaw refugee centre back to Spain.

“They are our heroes,” Trach told AFP outside a central Madrid church where the convoy of 29 taxis arrived in the early hours of Thursday after an epic five-day journey, pulling up to cheers from well-wishers gathered outside.

Most refugees are women and children who, like Trach, already have family or friends living in Spain. With them were four dogs and a cat. “I am going to look for work now to get money to help my country and my family,” said Trach, an orphan who left her grandparents back in Kyiv where she worked in telesales.

She spoke in Spanish which she learned as a child while staying with a family in Spain for three months.The
convoy, which included two drivers in each taxi who took turns behind the wheel, left the Spanish capital last Friday on the 6,000-kilometre (3,700-mile) round-trip.

For many, like 46-year-old Olha Shokarieva who fled the capital Kyiv with her 15-year-old son, leaving was a bittersweet experience. “I’m here only with my youngest son. My husband is now in Kyiv and my older
son is in (the western city of) Vinnytsia, they are staying there and fighting,” she said in English. “We don’t know if we have our house anymore and we don’t know what is our future.”

After crossing Europe together, many drivers and their passengers hugged each other and cried as they said goodbye.

The idea sprang from a discussion between taxi drivers about the Russian bombing of Ukraine as they waited for customers at Madrid airport.

When one suggested driving to Poland to bring back refugees, several others agreed, said Jose Miguel Funez of the Madrid Professional Taxi Federation, who coordinated the operation.

Soon dozens had signed up. “The response was incredible. We didn’t expect this,” said Funez.

Javier Hernandez, who brought over a couple and their 12-year-old son, said he “could not sit still” after watching images of children and women fleeing bombings.

When they first set off, the refugees were initially subdued, refusing to get out when the taxi convoy paused for breaks, but after the first day they were “hugging us, making jokes,” said the 47-year-old.

“In just a day, their lives changed. It’s very moving. It’s really nothing, it’s just driving for a few days which is what we do in Madrid.”

Organisers estimate the operation cost about 50,000 euros ($55,000), mostly in petrol and toll fees, with the funds raised through donations, mainly from fellow taxi drivers.

“Our people are amazing,” said Jesus Andrades, 38, one of the coordinators who transported three young Ukrainian women. “Some taxi drivers’ children even gave the money in their piggy banks.”

Madrid taxi drivers have a long track record of helping out during a crisis.

During the 2004 Madrid train bombings which killed nearly 200 people, taxi drivers ferried the injured to the hospital.

And when the Covid pandemic hit in spring 2020, they ran doctors house-to-house or took the sick to hospital. “We are common people, and at the end of the day, I think common people help out more,” said Hernandez, who once lived on the street for over a year after becoming depressed following his divorce.

More than three million people have fled Ukraine since Russia invaded on February 24, with Poland taking the bulk of them, United Nations figures show. The Ukrainian embassy in Madrid helped select the refugees for the convoy.

Like other drivers who took part in the convoy, 34-year-old Nuria Martinez said she was ready to hit the road again to collect more refugees. “You can’t do anything to help sitting at home on your sofa. We all have to do our bit,” said Martinez who brought back a mother and her two-month-old baby.

With thousands arriving in Spain, it is now believed that almost 6,000 Ukrainians have already been processed and received temporary papers in Spain. The majority of arrivals granted temporary protection papers are in Madrid, the Andalusia and the Valencian Community.