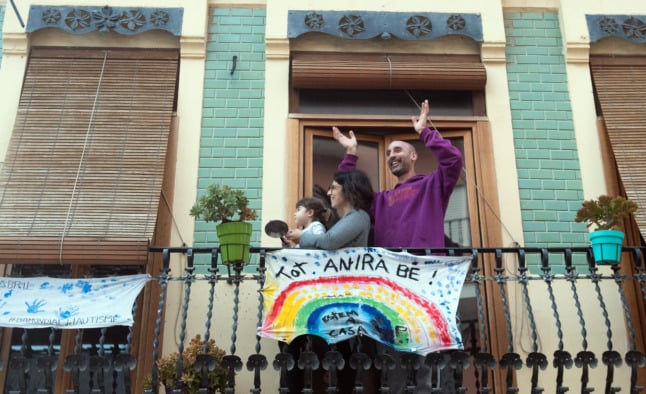 “All will be well”, reads a sign hanging from a balcony during Spain’s March to May 2020 lockdown. Balconies became important meeting points for socially deprived Spaniards, and highly sought after by those with no outdoor space at home. Photo: JOSE JORDAN / AFP

The first case of Covid-19 is detected in Spain, when a German tourist tests positive on the island of La Gomera in the Canary Islands. Two years on, more than ten million Spaniards – around one in every five – have reported they’ve had Covid-19 at some point during the pandemic. 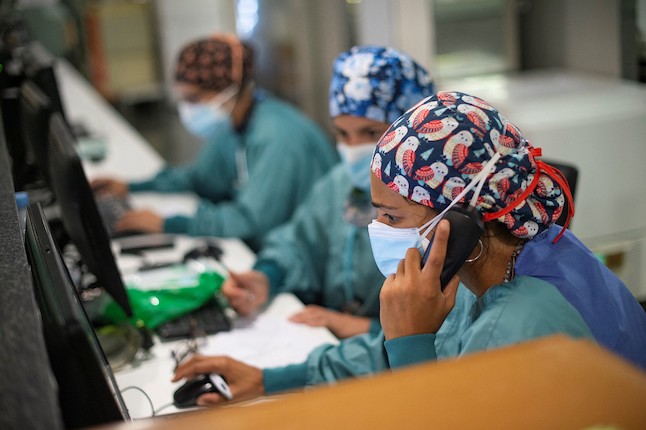 March 14th, 2020
Spain imposes a nationwide lockdown after reporting 1,500 Covid-19 cases per day. Everything except supermarkets and pharmacies close and people are only allowed to leave their homes to go to work, get supplies or for other essential reasons. For the first time in recent history, the streets and squares of Spain are empty, as a socially-minded nation used to enjoying life outdoors in the hustle of bustle of its towns and cities is confined indoors for two months. 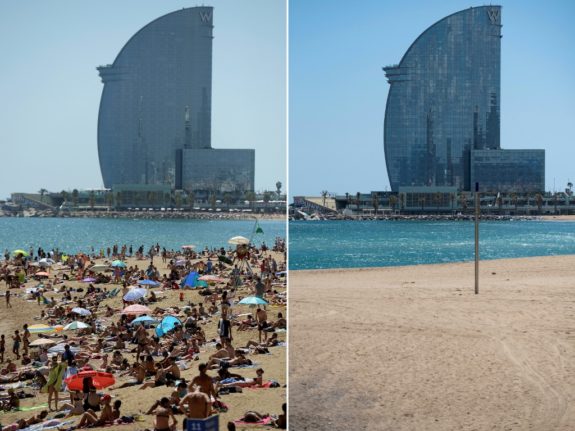 Before and after shots of Barceloneta beach in Barcelona as Spain’s 47 million inhabitants went into strict lockdown. (Photo by Josep LAGO / AFP)

Spain toughens coronavirus lockdown as all non-essential workers are told to stay home. All “non-essential” activities are also stopped in a bid to prevent the spread of a still largely unknown virus. Parents are working from home while kids have lessons online and Spaniards are forced to re-evaluate their homes and often cramped living spaces. Having a balcony, garden or terrace becomes more important than ever, and demand for properties with outdoor spaces skyrockets. 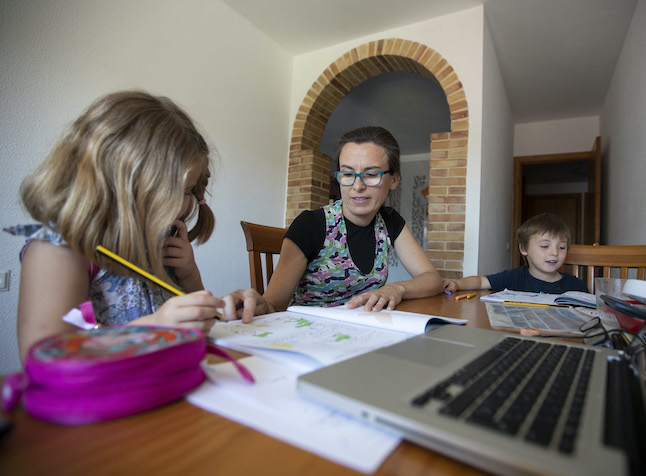 Between March and April, some 900,000 jobs were lost and 3.3 million people in Spain were put on the government’s benefits ERTE scheme, due to the shut down of services and almost the entire tourism industry. The loss of jobs, although huge throughout the world, highlights the chronically fragile nature of Spain’s job market and economy. Accepting food handouts also became reality for thousands in Spain, where poverty soared aggressively during the coronavirus pandemic. 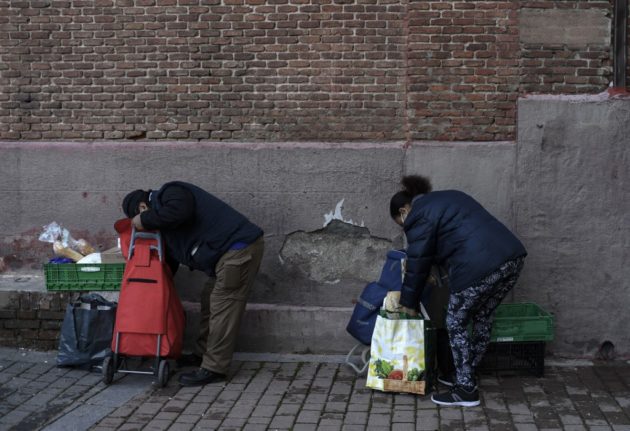 950 people die of Covid in 24 hours – the highest in any country worldwide at the time. The impact the first Covid-19 wave has on Spain’s elderly population in particular makes millions of Spaniards realise they have to act with civic conciousness and abide by the restrictions, with less opposition to the Covid rules than in other countries. 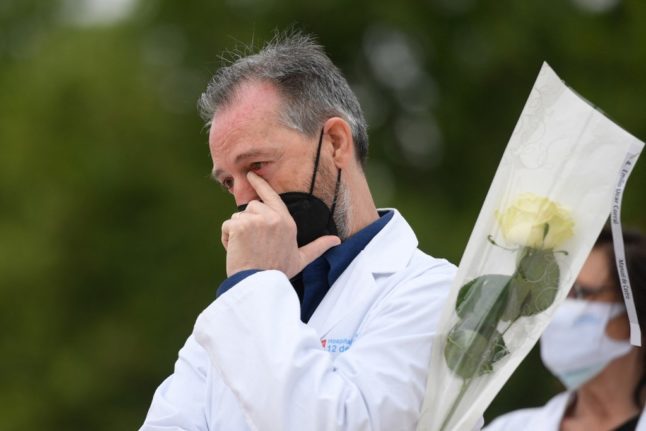 A doctor cries during a memorial for healthcare workers who lost their lives to Covid-19. (Photo by OSCAR DEL POZO / AFP)

The majority of Spain’s population is allowed out for walks and exercise for the first time since the lockdown on March 14th. Specific time slots are set out for different ages. Two days later on May 4th, most of Spain enters phase 0 of Covid de-escalation, meaning that small non-essential businesses can reopen by appointment only. Spaniards have a new-found appreciation for the simple act of going for a stroll, in a country where getting around on foot has always been normal. 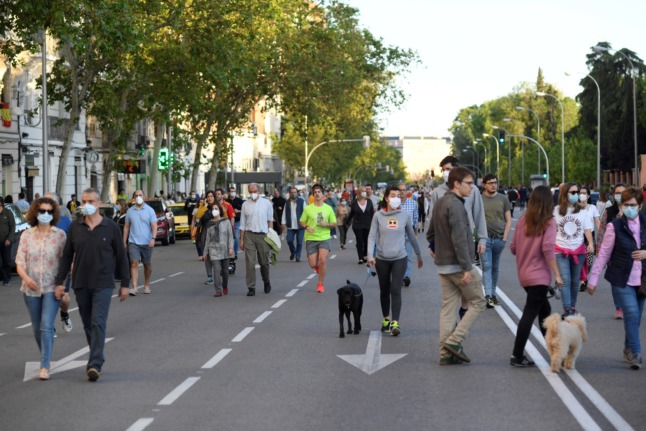 People in Madrid are allowed out for the first for walking and exercising in months. Photo: OSCAR DEL POZO / AFP

Spain’s first state of alarm ends and the country opens for tourism for travellers from the EU and a handful of other countries, including the UK. Travellers do not have to quarantine upon arrival. Many voices within the tourism sector see the pandemic as an opportunity to overhaul the country’s low-cost model, but Spain’s over-reliance on tourism numbers continues, even influencing Covid travel restrictions. 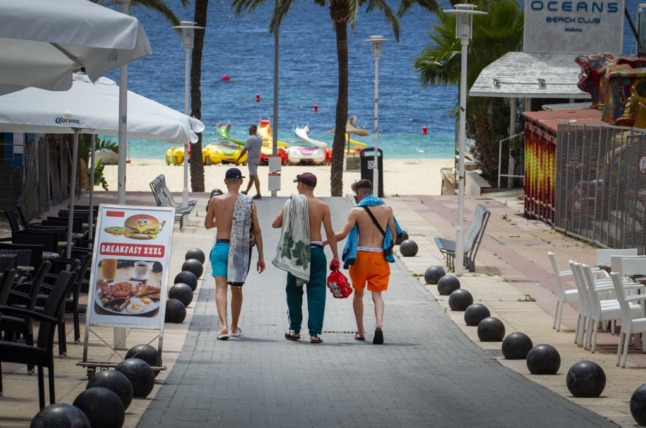 Ninety-six-year old Araceli Rosario Hidalgo becomes the first person in Spain to receive the Covid-19 vaccine. She is followed by many others, firstly the elderly in care homes. More than a year on, 82 percent of the country’s 47 million inhabitants have been fully vaccinated against Covid-19 and around half have had a booster shot. Spaniards have shown themselves to be among the most willing in the world to get vaccinated against Covid-19, relying on common sense, scientific evidence and the greater good of inoculation for the general public than on their individual fears and hesitancy. 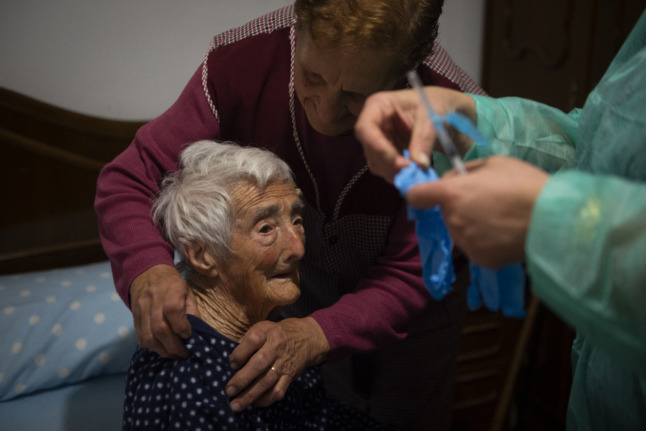 Eulogia Lage, 102, waits to receive a dose of the Janssen vaccine against COVID-19. Photo: MIGUEL RIOPA / AFP
March 30th 2021
After easing outdoor face mask rules for some months, the Spanish government went back to making them mandatory at all outdoor locations in Spain as the warm spring weather arrived. After complaints from the general public and tourists, authorities decided to make beaches, swimming pools and countryside locations the exception. But, overall Spaniards have willingly accepted changing mask legislation, they’ve become a must-have accessory in daily life here and many still choose to wear one outside as a precaution. 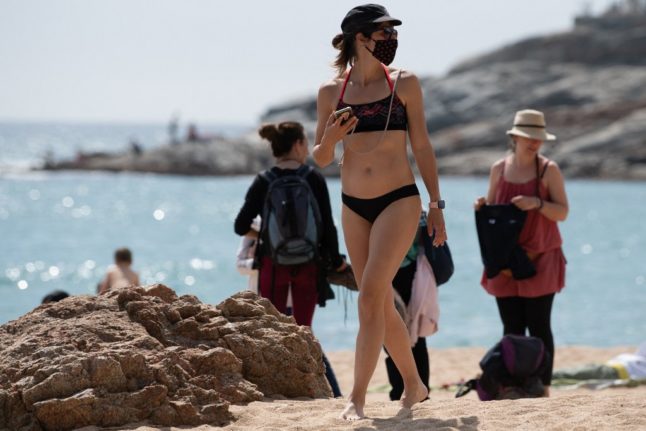 A woman wearing a face mask strolls along a beach in Catalonia. (Photo by Josep LAGO / AFP)
May 9th, 2021

Spain’s second state of alarm comes to an end, meaning travel can resume between Spain’s regions and nighttime curfews are lifted. Spaniards are very family-orientated people, so not being able to travel to see family was particularly tough on many. The pandemic also changes the culture of Spain, from one with lots of physical contact and kissing, to one with less or no touching at all. 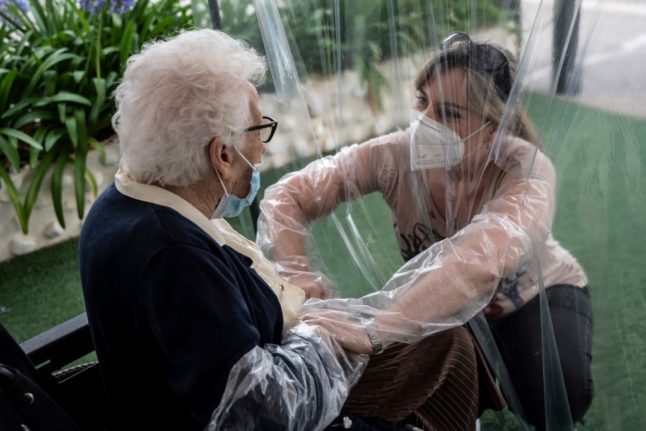 A woman holds her mother’s hands through a plastic curtain to protect her from infection after visits to care homes were allowed. (Photo by JOSE JORDAN / AFP)

September 1st, 2021
In just eight months, Spain hits its target of vaccinating 70 percent of its population against Covid-19. That is around 33.2 million people. Spaniards’ community spirit and their trust in health authorities are lauded around the world. 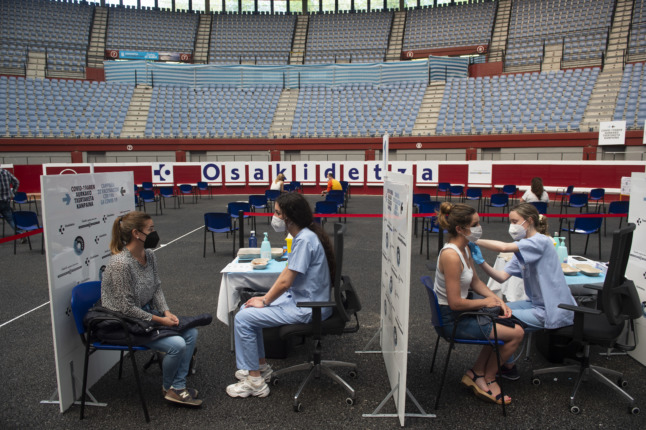 The Omicron variant smashes all of Spain’s previous daily infection and fortnightly infection records (50,000 new cases on December 21st alone), accounting for more than five million infections in under three months. Getting tested for Covid-19 becomes second nature for Spaniards of all ages with Christmas approaching and people eager not to infect their family members. 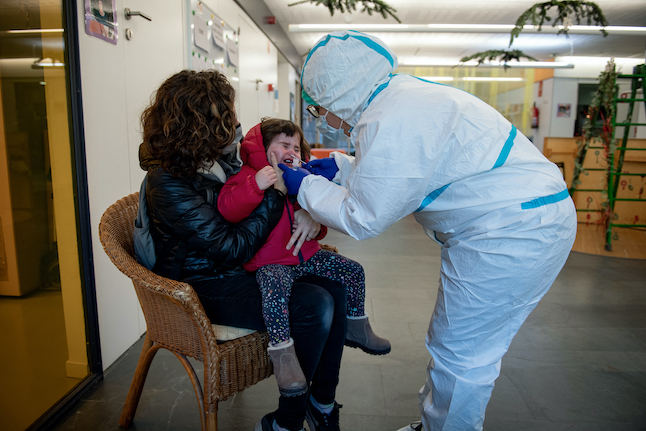 A surprisingly high number of Spaniards don’t feel that the pandemic has had a major impact on their lives and they’re among the Europeans who are most “hopeful” about the future. Those were the standout findings of a survey carried out by Spain’s Centre for Sociological Research (CIS) last June. Respondents acknowledged their loss of social life was something they’d struggled with the most, but overall have suffered less pandemic fatigue than their European counterparts. Spaniards’ more light-hearted approach to life and communal spirit may have helped them confront and hopefully overcome two years we will never forget. 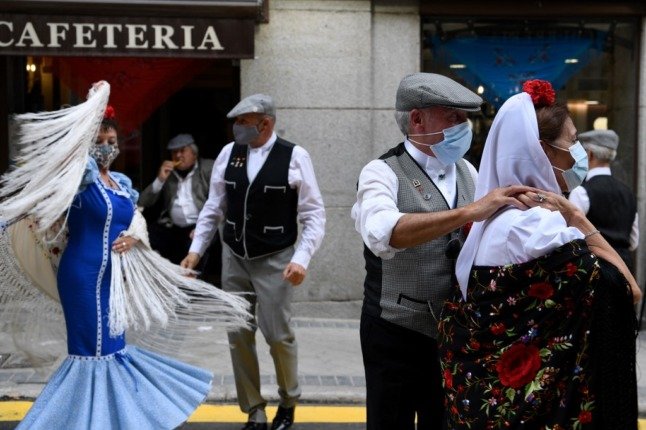 Two couples dressed in Madrid’s traditional “chulapa” and “chulapo” attires dance during San Isidro Day in the capital, on May 15th 2021. (Photo by GABRIEL BOUYS / AFP)