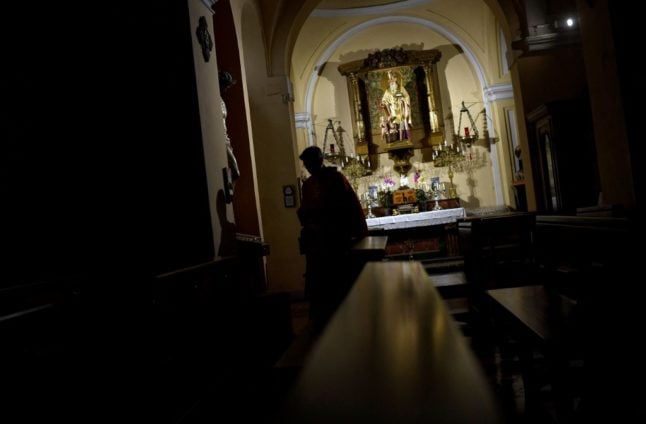 In Spain, no official statistics exist on child sex abuse by the clergy. Photo by OSCAR DEL POZO / AFP)

The text, which provides for the creation of an independent panel to investigate sexual abuse against minors, was voted through by 286 votes in favour in the 350-seat assembly.

Until now, there has never been an official inquiry into alleged abuse by members of the clergy.

Under the proposal, which was drawn up by the ruling Socialist party and the Basque nationalist PNV, the panel will be chaired by Spain’s ombudsman and include experts, representatives of victims’ associations and members of the clergy.

It will be tasked with investigating “the abhorrent actions by individuals against defenceless children… so that both the people who committed these abuses and those who concealed or harboured them can be exposed”, it reads.

The committee will then draw up a report which will be submitted to parliament.

The move was hailed by Prime Minister Pedro Sánchez on Twitter, who described it as “a first step to try and address the pain of the victims who have not been heard until now. Thanks to all the groups that have supported this much-needed initiative.”

Historically, Spain has always been a deeply-Catholic country where some 55 percent of the population identifies as Roman Catholic, and where 1.5 million children study in some 2,500 Catholic schools.

In recent decades, thousands have spoken out about harrowing abuses by clergy across the United States, Europe, Australia and beyond, prompting Church probes in many nations seeking redress for the victims.

But there has been no such investigation in Spain where no official statistics exist on child sex abuse by the clergy.

‘Must be done properly’

Given the absence of data, El Pais newspaper began investigating allegations in 2018 and has since received details of 1,246 cases, some dating back to the 1930s.

Until now, the Church has only recognised 220 cases of abuse since 2001, and has ruled out any “comprehensive investigation” into abuse reports, insisting it had abuse protocols in place.

“This investigation must be done properly because it will be the beginning of the end of an outrageous situation,” Socialist lawmaker Carmen Calvo told the paper this week.

Last month, Spain’s parliament agreed to consider another request to open a parliamentary inquiry, but the proposal was dropped in favour of the Socialists’ plan for an independent expert panel, following a formula used in Australia, France and the Netherlands.

The vote comes several weeks after the Church took a first step towards addressing clerical abuse of children by engaging lawyers to conduct an investigation that will take cues from similar probes in France and Germany.

At the time, Cardinal Juan Jose Omella, head of the CEE Episcopal Conference grouping Spain’s leading bishops, said the Church wanted “to take responsibility.. by creating a new means of cooperation to clarify past events and ensure they don’t happen again”.

The probe will be conducted by Cremades & Calvo Sotelo law firm which said its investigation would take about a year and take cues from the “positive” aspects of a French probe and “the methodology used in Germany”.

The French investigation found that 216,000 minors had been abused by clergy since 1950, but that figure rose to 330,000 when claims against lay members of the Church were taken into account, which includes teachers at Catholic schools.

In Germany, a report published in January by Westpfahl Spilker Wastl (WSW) law firm found at least 497 children had been abused in Munich-Freising archdiocese between 1945 and 2019.

British police believe David Ungi, 30, was involved in the fatal shooting in 2015 in Liverpool of 18-year-old Vinny Waddington while he was riding a motorcycle.

Ungi, who is also wanted in connection with heroin trafficking, left Britain less than 24 hours after Waddington was killed, according to British authorities.

Spanish police said in a statement Ungi was arrested along with three other British men in the town of Coin near the southern resort of Marbella on May 5 as they entered a gym at a shopping centre.

Officers seized a firearm from a rucksack being carried by one of the men, Spain’s National Police said in a statement.

A police search of Ungi’s residence in Coin turned up a machinegun and two other guns as well as “abundant ammunition”, 15 kilos (33 pounds) of cocaine and 19 kilos of hashish, the statement added.

Spanish police said the operation was carried out in cooperation with Britain’s National Crime Agency, which had put Ungi on its most wanted list.

The Spanish coast has long a popular bolthole for British criminals fleeing the law because they can blend easily into thriving expatriate communities.