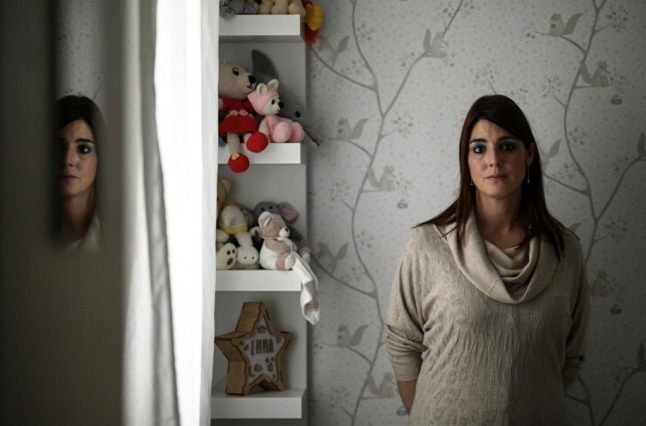 Geriatric doctor Marta Vigara, who could not have a therapeutic abortion at the hospital where she works, poses at her home in Madrid on February 10, 2022. - Women in Spain still face obstacles when they choose to terminate a pregnancy even though abortion was decriminalised in 1985, a situation Prime Minister Pedro Sanchez's leftist government wants to change. No official statistics exist on how many objecting doctors exist in Spain. But according to the Spanish Doctors Order the "majority" of obstetrician-gynaecologists who work in the public sector are "conscientious objectors", a term coined by pacifists who refuse military service. (Photo by OSCAR DEL POZO / AFP)

A geriatric specialist working at Madrid’s Clínico San Carlos hospital, she immediately went to her colleagues in the gynaecology department to have a therapeutic abortion.

Such a procedure can be carried out when a woman’s life is in danger or the foetus has a severe abnormality.

But no doctor would do it on grounds there was still “a foetal heartbeat”, directing her to a private clinic instead.

“I arrived at the clinic bleeding, probably because of a detached placenta,” the 37-year-old told AFP at her Madrid apartment where she recounted the ordeal she lived through in December 2020.

Vigara later learnt that the entire gynaecology unit at Clinico San Carlos had declared themselves “conscientious objectors” against abortion.

Her experience illustrates how women in Spain still face obstacles when choosing to terminate a pregnancy even though abortion was decriminalised in 1985.

There are no official statistics on how many doctors object to abortion in Spain.

But according to the OMC Spanish doctors’ association, “most” obstetrician-gynaecologists who work in the public sector are “conscientious objectors”, a term coined by pacifists who refuse military service.

That explains why 84.5 percent of abortions carried out in 2020 – the last available official figures – were done privately, with the state footing the bill.

In some regions, women travel hundreds of kilometres for an abortion because there is no private clinic nearby and the local hospital will not perform the procedure.

In eight of Spain’s 50 provinces, no abortion has been carried out since the procedure was decriminalised in 1985, the government says.

It is preparing a law to guarantee access to the procedure at public hospitals, with the issue set to be a central theme at Spain’s International Women’s Day marches on Tuesday.

Even when women can reach a private clinic, they are sometimes confronted by anti-abortion activists en route who pepper them with uncomfortable questions or prayers.

For the past decade, psychiatrist Jesus Poveda has gathered regularly with his team of “rescuers” outside the Dator private abortion clinic in Madrid to try and persuade women not to end their pregnancies. 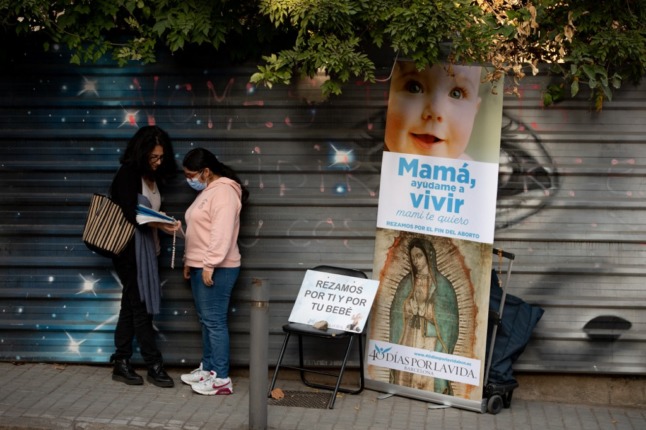 A member (L) of “40 dias por la vida” (40 days for life), an international anti-abortion organisation that campaigns against abortion through prayer, speaks with a woman outside the Emece private hospital in Barcelona on October 28, 2021. (Photo by Josep LAGO / AFP)

They invite women to enter a van equipped with an ultrasound machine which they call an “ambulance” to show them that what they’re carrying “is a living being”, says Poveda, who teaches at Madrid’s Autonomous University.

A draft law that passed its first reading in Spain’s parliament in February will ban such protests outside abortion clinics as “harassment”.

“We will keep coming,” says Poveda, who has vowed to “get around the law” if it gets final approval, as expected.

The Catholic Association of Propagandists (ACdP) launched an ad campaign against the bill in January with posters in 33 cities reading: “Praying in front of abortion clinics is great.”

Sanchez’s government also wants to modify the law so minors of 16 and 17 can terminate a pregnancy without their parents’ consent, as is the case in Britain and France.

These youngsters can decide for themselves whether to “undergo a life or death operation, yet parental consent is required to voluntarily terminate a pregnancy,” Equality Minister Irene Montero said last month.

Staunchly Catholic Spain decriminalised abortion in 1985 in cases of rape, if a foetus is malformed or if a birth poses a serious physical or psychological risk to the mother.

The scope of the law was broadened in 2010 by the previous socialist government to allow abortion on demand in the first 14 weeks of pregnancy.

But in 2015, a conservative Popular Party government tried to roll back the changes but had to back down in the face of strong public opposition.

Instead, it introduced the parental consent requirement for minors which exists in most European nations.

Vigara is hoping “things will change”.

“When they send you away (to a private clinic), you feel a bit stigmatised as if you’re doing something wrong. I felt very guilty and very miserable.”