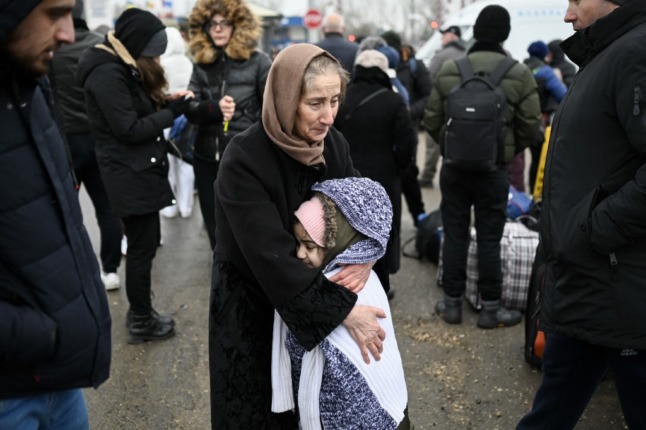 An elderly woman hugs a girl as refugees from Ukraine wait for a transport at the Moldova-Ukrainian border's checkpoint near the town of Palanca on March 1, 2022. (Photo by Nikolay DOYCHINOV / AFP)

Government spokeswoman Isabel Rodríguez said Ukrainian refugees would be “full citizens” from the moment they arrived in Spain, notably “in terms of access to employment”.

The European Union is mulling giving Ukrainians special status under an as yet unused 2001 Temporary Protection Directive that would allow them to live and work in the bloc for up to three years.

The directive was originally drawn up for refugees from the conflicts gripping the former Yugoslavia, with provisions for handling a massive inflow of people and measures to distribute them across the EU’s member states.

For the tool to be used, though, a qualified majority of EU states — 15 of the 27, representing at least 65 percent of the bloc’s population — need to back it.

Rodríguez also said the right to “live and work” in Spain for those Ukrainians already here was “guaranteed”.

There are around 112,000 Ukrainians currently living in Spain, according to the INE national statistics office.

Separately, the defence ministry said Spain will send 150 additional troops to Latvia, who will join the 350 Spanish troops already there.

READ ALSO: How is Spain helping Ukraine (and is it enough?)