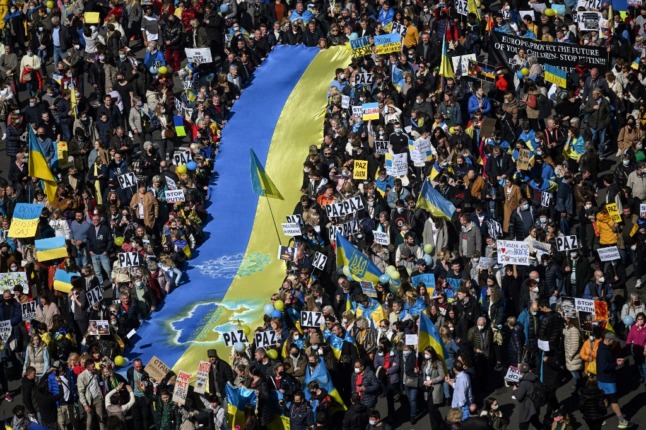 Demonstrators hold a giant Ukrainian flag during a protest against Russia's invasion of Ukraine in Madrid on February 27, 2022. Photo: Gabrie BOUYS/AFP

Since Russian forces officially invaded Ukraine on February 24th, dozens of protests have been held in cities across Spain including Madrid, Barcelona, Valencia, Sevilla, Zaragoza, León, Murcia, Logroño and Bilbao.

Around 40,000 Spaniards, Ukranians and other foreign residents marched through the streets of Madrid on Sunday, brandishing Ukrainian flags, signs reading ‘No a la guerra’ (No to war) and caricature drawings comparing Vladimir Putin to Adolf Hitler.

“We are living in fear, thinking that they’ll go to sleep and they won’t wake up,” Nadia Pavlyuk, a Ukrainian living in Madrid, told AFP about her relatives and friends in Ukraine. 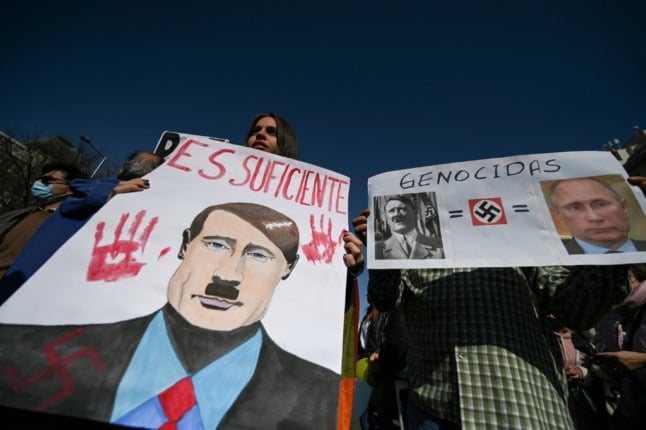 “They are in basements, bunkers, or they’ve gone to their villages, where they can be a bit calmer. They are terrified.

“I think that all the measures that have been taken until now are very soft, and Putin does not care about them, he ignores them. The only thing that could affect him is if someone helps us militarily. Even if we don’t want war, it’s now the only option we have to defend ourselves.” 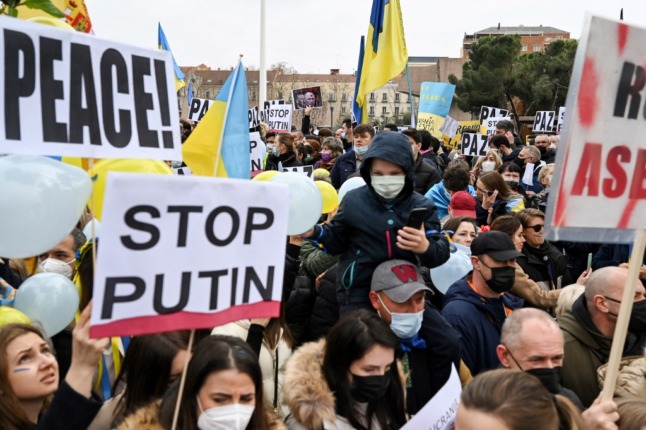 Demonstrators in Madrid hold signs reading “Stop Putin” and “Peace!” during a protest against Russia’s invasion of Ukraine in Madrid on February 27th. (Photo by GABRIEL BOUYS / AFP)

Protest organisers in Madrid have set up an information point to explain how people can help Ukraine financially or how to donate food, clothing and medicine at collection points to send aid to the war-torn population.

“It is not right that you’ve been forced to leave your homes, the solution is Europe, NATO and being all together against the invaders,” shouted through a megaphone Madrid deputy mayor Begoña Villacís during Sunday’s march from Colón square to Cibeles fountain. 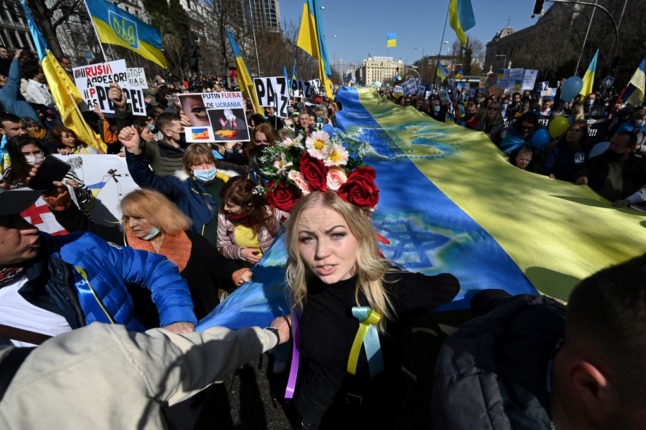 For Mykola Bryyovskyy, another Ukrainian living in the Spanish capital and who’s married to a Russian woman, “now we have to protest all over the world because it’s not just a war against Ukraine, it’s a war against democracy and freedom.”

“In the end, Putin will make the world dislike Russians and they will be ashamed to say that they are Russians, when in fact there are very good people there,” laments Madrid resident Liudmyla Tsekhmeister. 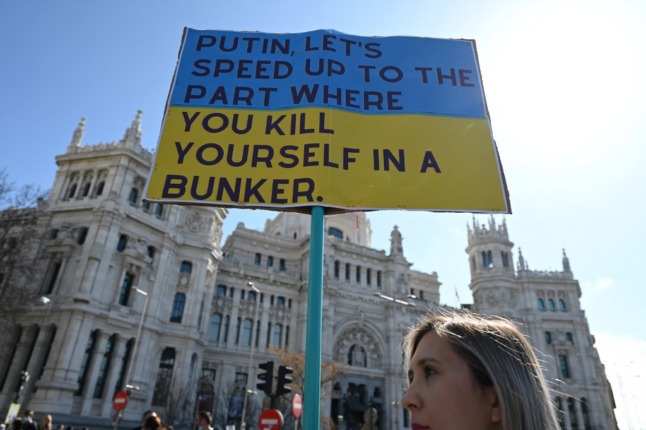 A demonstrator holds a sign reading “Putin, let’s speed up to the part where you kill yourself in a bunker”, alluding to how Hitler took his own life during WWII. (Photo by GABRIEL BOUYS / AFP)

“I mean, I don’t think there is a person in this world who can sleep peacefully today… There is a lot of instability and unfortunately I’m really scared that the West is not going to do anything about it,” Philip Kavr, a student from Poland, told AFP during a protest in Barcelona. 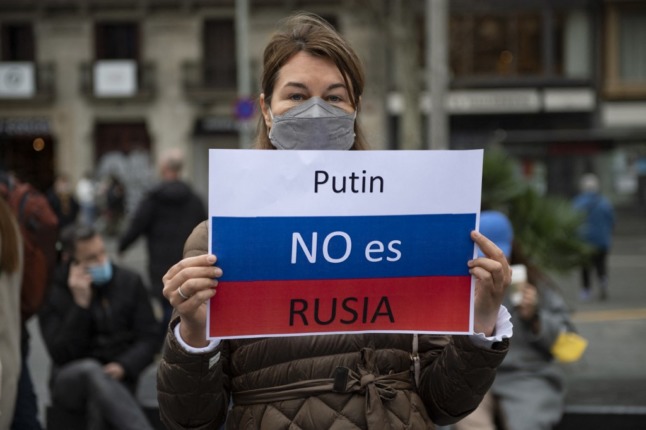 A demonstrator holds a sign depicting the Russian flag and reading “Putin is not Russia” during a protest in Barcelona. (Photo by Josep LAGO/AFP)

Hundreds of people have been protesting for several days in successive demonstrations in the Catalan capital, and Ukrainian nationals say they will continue doing so until their countrymen are safe. 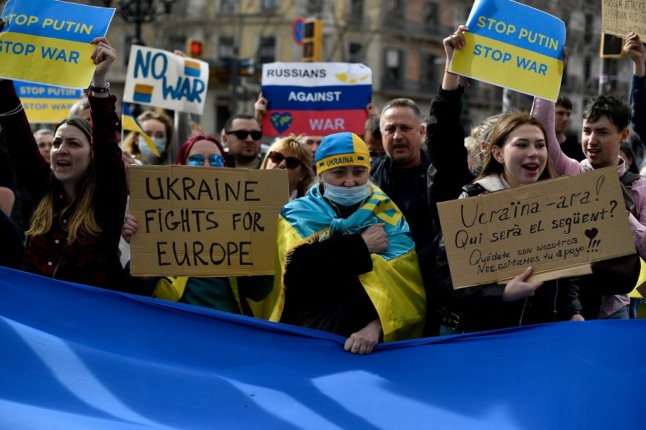 Demonstrators in Barcelona hold placards reading “Ukraine fights for Europe” and “Ukraine now, which country will be next?”. (Photo by Pau BARRENA / AFP)

“I am worried because I have all my family there,” said Julia Rudenko, a bank employee from Ukraine living in Barcelona.

“I have come to give moral support and to shout so Nato and the European Parliament listen to us. We are people, we are civilians who have done nothing and we don’t deserve to die.”

Dimitri, a Russian designer living in Barcelona, thinks that “now with the sanctions we are all going to suffer, they are going to ban [Russia from] SWIFT, halt the support and supply of technologies, and Russia will go back to the 80s or 60s in terms of technologies and everything, and I’m not talking about medicine… Everything is going to be bad.”