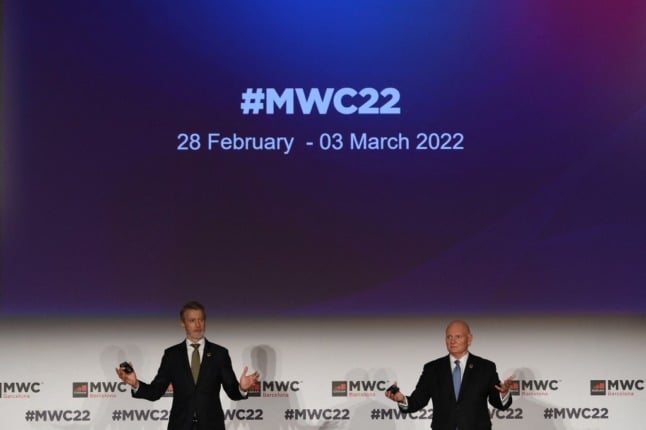 GSMA Director General Mats Granryd (L) and GSMA CEO John Hoffman hold a press conference, ahead of the start of the MWC (Mobile World Congress) in Barcelona. The world's biggest mobile fair is held from February 28th to March 3rd but organisers have decided to exclude Russia from the event following their invasion of Ukraine. (Photo by LLUIS GENE / AFP)

The GSMA industry association which stages the annual event said in a statement it “energetically condemns Russia’s invasion of Ukraine”.

“In light of this emerging situation and considering the tragic loss of life, MWC seems immaterial under the circumstances,” it added.

“The GSMA is complying with all sanctions and government policies resulting from this situation. Therefore, there will be no Russian pavilion at MWC22.”

About a dozen Russian firms were set to be part of the Russian pavilion at the four-day event which gets underway on Monday in Barcelona in northeastern Spain.

These firms can still take part in the fair but they will not be grouped together in their own pavilion.

The show, a key event for showcasing new technologies, had been cancelled at the last minute in 2020 after multiple companies withdrew as the Covid-19 pandemic took hold.

Last year, the congress did take place although it was in June instead of February and included a mixture of in-person and online events, drawing just 20,000 visitors compared with 100,000 in normal times.

The event, which draws more than 100,000 people to Barcelona, has been held in Spain’s second largest city since 2006.

The existing agreement between the GSMA association that hosts the congress and local authorities ran until 2024.

“We are thrilled to announce that MWC will remain in Barcelona through to 2030,” said GSMA director general Mats Granryd said in a statement.

“Barcelona is so intertwined in the MWC experience, it’s hard for me to think about one and not the other,” he added.

The gathering was one of the first events to be cancelled in 2020 as Covid-19 started to sweep across the world.

A scaled back edition was held in 2021 in June instead of February as is usually the case, with many events staged online.