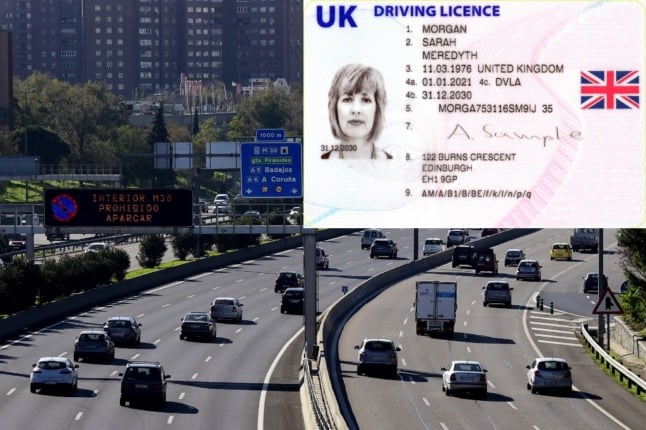 UK licence holders in Spain will have another two months during which they'll be able to drive in Spain, with negotiations over an easy licence exchange still ongoing. Photo: JAVIER SORIANO / AFP

The Spanish government has approved another two-month extension to the validity of UK licences in Spain, several days after UK Ambassador for Spain Hugh Elliott announced he had requested a longer grace period as the February 28th deadline neared.

“Following the Ambassador’s message last week we are pleased to let you know that yesterday the Spanish Government confirmed an extension of the current grace period for the recognition of UK driving licences,” the UK Embassy in Madrid wrote in a Facebook message.

“That means that those of you who were living in Spain before January 1st 2021 can continue to drive in Spain with your valid UK driving licence until April 30th 2022,” the British Embassy explained.

“If you moved to Spain after January 1st 2021, your licence will be recognised for six months from the date you obtained residence, or until April 30th 2022, whichever is later.

“For those of you who registered your intention to exchange your licence with the DGT before December 30th 2020, but have not yet done so, you have until April 30th to request an appointment.

The news will give some respite to UK licence holders in Spain, but the UK Embassy continues to suggest that people should make the necessary arrangements to take the test if it’s imperative that they continue to drive, regardless of whether a deal is reached or not.

“I recognise that for language reasons this is not an option for many of you,” HMA Hugh Elliott stated last Thursday, in relation to the fact that the practical driving exam in Spain is with a Spanish-speaking driving examiner and can’t be done in English.

The vast majority of EU countries have been able to reach a deal with the United Kingdom over the recognition and easy exchange of driving licences post-Brexit, but Spain remains an outlier.

“I can’t go into the details of the negotiations, but I can say that they are ongoing, there are regular meetings and there’s a strong will on both sides to reach an agreement,” the British Ambassador added.

“This process is of course taking much longer than we’d hoped and of course that creates anxiety for you, I know.”

It is unclear yet if any future agreement would be beneficial just to British residents who are protected under the Withdrawal Agreement or other UK licence holders who have moved or will move to Spain to become residents after Brexit came into force on January 1st 2021.

Unless Spain has a bilateral agreement with a third country for the recognition and exchange of licences, most non-EU driving licence holders have six months from their arrival in Spain to use their foreign licences (some need an international driving permit from the very beginning).

The situation described in this article doesn’t apply to British tourists with UK licences visiting Spain who are for example renting a car during their holidays.

The issues affect UK licence holders who are residents in Spain.

READ ALSO: The challenges Britons in Spain face in 2022