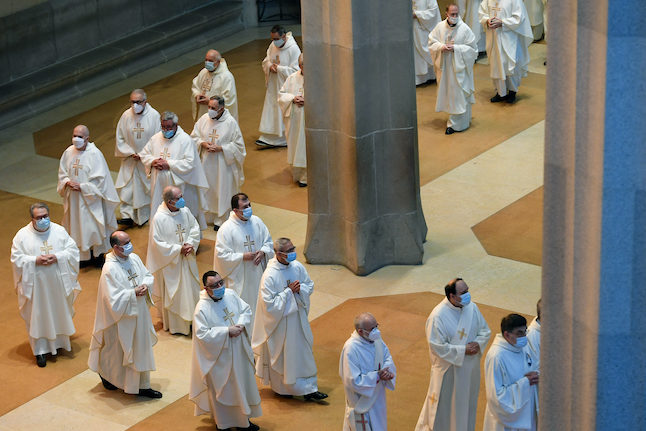 The move came as political pressure grows for a formal investigation into
alleged abuse by the clergy in a country where no such official probe has ever happened.

Cardinal Juan Jose Omella, head of the CEE Episcopal Conference that groups Spain’s leading bishops told reporters the Church wanted “to take
responsibility with regard to the victims, the authorities and Spanish
society, by creating a new means of cooperation to clarify past events and
ensure they don’t happen again”.

Once again, he asked for “forgiveness” on behalf of the Church for causing
the victims “so much pain”.

Earlier this month, parliament said it would look into creating an expert
panel to examine such abuses. The Church has pledged to cooperate with it.

Asked why the Church had only now decided to open an investigation, despite years of what victims have denounced as stonewalling and denial, Omella said it was “not easy to make a quick decision.

“For us, what’s important is that we’re starting a new stage,” he said.

Until now, the Spanish Church has only recognised 220 cases of abuse since
2001, and has ruled out any “comprehensive investigation” into abuse reports
as happened in places like Australia, France, Ireland or the United States.

Javier Cremades, head of law firm Cremades & Calvo Sotelo, said its
investigation would take about a year and be based on work already done by the dioceses.

But it would also draw on the “positive” aspects of a French probe that
exposed 216,000 cases since 1950, and “the methodology used in Germany”.

In Germany, a report published last month by law firm Westpfahl Spilker
Wastl (WSW) found at least 497 children had been abused in Munich Freising archdiocese between 1945 and 2019.

It also accused former pope Benedict of having knowingly failed to act
against four offenders when he was the archbishop there between 1977-1982.

Earlier this month, Benedict XVI denied any cover-up while asking forgiveness for abuses carried out by the clergy against children.

Cremades said his team, which would be advised by Germany’s WSW, would seek to establish “a faithful picture of what happened” by gathering information “first and foremost from those affected – from victims, from their
associations and the media”.

With no official statistics on child sex abuse in a country where 55 percent of the population identifies as Roman Catholic, El Pais newspaper
began investigating in 2018 and has since received details of 1,246 cases,
some dating back to the 1930s.

Cremades, who admitted being a member of the ultra-conservative and
influential Opus Dei movement, said that the Church “needs to see this through to the end, to plumb the depths of the problem, to investigate and to ask forgiveness if necessary and put right whatever needs rectifying”.

The law firm has opened a mechanism for receiving complaints with the
investigation to be carried out by a team of 18 people, among them several
former Supreme Court judges.

Both Cremades and Cardinal Omella said its work would not take precedent
over the parliamentary initiative but would “complement” it, with the CEE head insisting there would be “close and efficient collaboration” between the two.

Spain’s parliament is currently studying two options: that of setting up an
expert committee to investigate child abuse within the Church that would
report to the state ombudsman, and another request for a parliamentary probe into the matter.

The political impetus for an investigation came after high-profile Catalan
writer Alejandro Palomas went public for the first time about being abused by
a priest at his school when he was just eight years old.

In an unusual step, Spanish Prime Minister Pedro Sánchez reached out to him on Twitter and met him several days later.