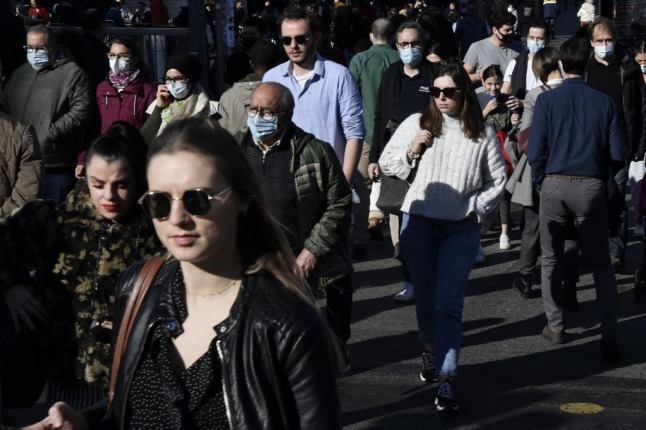 People, some wearing face-masks, walk in a street as they enjoy a day out in Barcelona. It's no longer mandatory to wear a face mask in Spain but many prefer to keep it on. (Photo by Pau BARRENA / AFP)

Spain’s government first imposed obligatory mask-wearing outdoors in May 2020, lifted it in June last year and then reimposed the measure just before Christmas as Omicron cases exploded.

Now Spain’s 47 million inhabitants are back to not requiring a face mask outdoors anymore (wearing one indoors remains mandatory).

But even as rules eased across the country on Thursday, in Madrid, some kept them on out of habit.

READ ALSO: When do I still have to wear a mask outdoors in Spain?

“I’m wearing one and I’ll keep on doing so even though the law says I can take it off,” said Alberto Díaz, a pensioner from the southern Andalusia region who was in the city for a concert.

He’s one of many people across Spain who are choosing to keep their masks on. “I think that once the pandemic is over, I will continue to wear it, to avoid other viruses, outside and inside. It’s tiring sometimes, but it’s a habit now,” Argentinian tourist Sol Carvalho told AFP.

Face masks have been embraced across Spain in all public spaces, both inside and out, and they have largely become ubiquitous like in many cities in Asia.

Although they will remain compulsory at large open-air gatherings where social distancing is not possible, they will no longer be required in school playgrounds or busy streets, although it’s still recommended by Spain’s Health Ministry.

“I trust the people who have studied this, like the epidemiologists, and if they have given the order to remove the mask, it is because there is no danger,” argued Zaragoza resident María Jesús Remacha.

Soraya Baladés, a piano teacher who lives in the Spanish capital, said: “I really wanted to take it off because there wasn’t much sense in keeping the mask outside anymore, the mask should really be used inside, where the contaminations happen and not outside.”

Newlyweds Ricardo Alfredo Sánchez and Yvette Candero looked delighted as they had their photo taken in Puerta del Sol Square. “It’s not the same having a souvenir photo taken with your face covered, you can’t see the person’s expression or how happy they are,” said the groom.

“It was getting a little boring wearing the mask all the time and it just so happened that for this special occasion we had the opportunity to take it off.”

In another anticipated move, in the northeastern region of Catalonia, nightlife venues were set to open at the stroke of midnight (2300 GMT). In late December, the Catalan government put in place some of Spain’s most restrictive measures to fight Omicron, imposing a night curfew from 1:00 am, closing nightlife venues and halving the capacity in bars and restaurants.

The bar and restaurant restrictions were eased last month, but nightlife venues had remained closed, until Friday — with most set to open just after midnight.

Despite high vaccination rates, Covid cases exploded in Spain over the Christmas holidays, giving it one of Europe’s highest incidence rates, although that has now fallen. So far, Spain has registered some 10.5 million infections and more than 95,000 deaths.