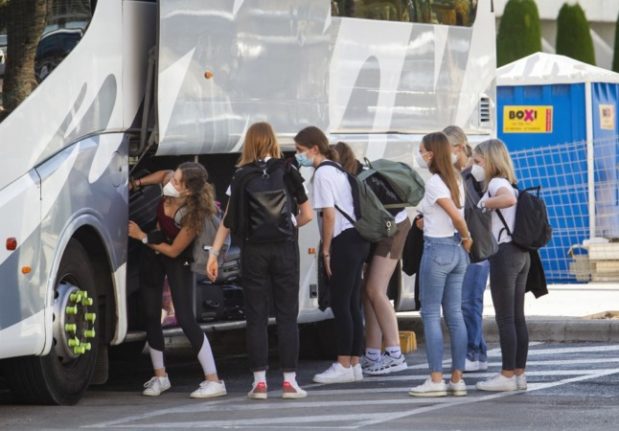 British holidaymakers cannot bring their kids aged 12 and over to Spain for holidays unless they've been fully vaccinated. (Photo by JAIME REINA / AFP)

​​In early December 2021, Spanish authorities changed the rules for UK travellers, requiring all those over the age of 12 to be fully vaccinated in order to be travel to Spain for non-essential reasons such as tourism.

The vaccination rule had in fact been around for months for all other non-EU travellers, but Spain had made the exception for British tourists given the importance they have for the Spanish tourism industry and therefore the country’s economy, welcoming 18 million UK tourists in 2019, the last pre-pandemic year, but only 4.3 million in 2021.

However, with the rise in Omicron cases towards the end of 2021, Spain’s health ministry was left with no choice but to tighten the rules for their chief tourism market.

This was particularly problematic over the Christmas holidays as thousands of parents were forced to cancel their visits to Spain given that their teenage children were not fully vaccinated against Covid and therefore couldn’t travel.

Although Britain has had a somewhat successful vaccination rollout overall, only one in ten British children are currently legally able to legally enter Spain for tourism purposes. Around 300,000 – roughly 12 percent – of 12 to 15-year-olds in the UK have received two doses of a vaccine.

Children under twelve years of age are exempt from Spain’s vaccination requirements for travel.

Businesses in the Spanish tourism sector worry this will affect both the upcoming half-term holiday, Easter, and even summer holiday periods if the rules aren’t changed.

In the Canary Islands, hotel occupancy has dropped to 50 percent for this very reason, and the rules have forced British families to cancel or rearrange holiday plans.

For many Brits the solution has not been to leave the children behind but instead travel to destinations with less stringent vaccination travel rules.

For a country with an economy recovering more slowly than its European neighbours, a change to the rules – as had been rumoured and reported in both the UK and Spain – might suggest that Spain is now finally in a position to prioritise its economy over public health.

“It hurt us a lot, as in December we lost a lot of bookings from British families,” Jorge Marichal, president of the Spanish Confederation of Hotels and Tourist Accommodation (CEHAT), complains.

“While our competitors open their borders to the British market, Spain continues to put obstacles in the way of under-18s and, therefore, family tourism.”

“If we lose markets as important as the British because they decide for Easter and summer,” Marichal added, “to go to other destinations with more rational health measures, it will cost us an immeasurable effort to win them back, if we do so at all.”

To further muddy the waters, from this month many double-vaccinated visitors require a booster jab to enter Spain. From February 1st, Spain is only admitting travellers who received their most recent dose (the second or third jab) within the previous 270 days – around nine months before. Solutions in time for high season?

Hope remains that the Spanish health authorities may change course.

Led by the Canary Islands, tourist hotspots across Spain including the famous Costa Blanca and Costa Del Sol have called for the measures to be eased, especially as the high-season approaches.

Canarian president, Ángel Víctor Torres said on Friday that ​​”I have been talking for weeks with the Ministers of Health and Tourism and with the Canarian tourist employers,” about the negative economic impact the vaccine restrictions are having on the archipelago.

Torres is convinced that “in the next few days there may be a solution” but at this time it remains unclear if this would mean a change to the rule on the Canaries or across Spain.

Indeed it has been reported that Spain’s Health Ministry is working on a solution specifically to solve the issue of unvaccinated British minors and their families that want to spend their holidays in Spain, rather than all unvaccinated non-EU teenagers.

The Hotel and Tourist Business Association of the Valencian Community (HOSBEC) has also called “on the part of the Government of Spain regarding British minors without a complete vaccination schedule who are prevented from entering Spain”.

As so few British children have received two doses of the vaccine, it is believed that the rules may be ‘overlooked’ for them in order to accept one dose and a negative Covid-19 test.

It has also been reported in the Spanish press that the national government is in talks with the EU with regards to possible changes to the entry requirements for tourists from third countries in order to make the current measures more flexible.

But The Times reported on Thursday that Spain will reject recent EU guidelines and refuse coronavirus recovery certificates from UK arrivals, citing Spanish tourism officials, which adds another layer of uncertainty to what the rules will be for British tourists of all ages wanting to holiday in Spain over Easter.

In the meantime hospitality and hotel businesses across Spain will be waiting anxiously, hoping the COVID-19 pandemic won’t ruin a third summer season for the tourism industry.

Will they find a solution? If past events are anything to go on, Spanish authorities have been willing to give British visitors preferential treatment over all other non-EU tourists during the pandemic, despite their new post-Brexit third country status.

As Omicron cases are gradually falling in Spain and other Covid restrictions such as mask wearing and Covid passes for daily affairs are eased, there is a chance that Spanish authorities will act soon to entice British families to visit the country this winter and spring.