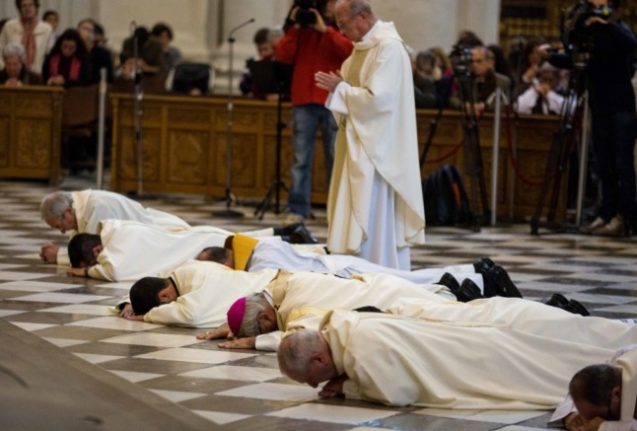 Priests in Granada cathedral repent during a mass in 2014, as a gesture of apology to victims of abuse by the clergy. Photo: PHOTO/ STRINGER

Until now, there has never been an official investigation into alleged abuse by members of the clergy, not by Spain’s government nor by the Spanish church itself.

The Church in Spain, which has only recognised 220 cases over the past 20 years, has never held a comprehensive investigation, saying it has protocols in place to manage abuse allegations.

But the situation appears to be changing in this historically religious country, where some 55 percent of the population identifies as Roman Catholic and where 1.5 million children study in some 2,500 Catholic schools.

On Tuesday, Spain’s parliament agreed to consider opening an inquiry following a petition by Podemos, the hard-left partner in Spain’s left-wing coalition, and two pro-independence parties, the Catalan ERC and the Basque EH Bildu.

For such a commission to be set up, it will have to be voted through a plenary session by a simple majority of lawmakers. No date has yet been set.

PM ‘not saying no’

Although Prime Minister Pedro Sánchez’s Socialist party has backed the idea in principle, it hasn´t said if it would prefer an investigation by a parliamentary commission or by an independent expert committee, as seen in Australia and the Netherlands.

“We are completely dedicated to studying all possible formulas for doing this in the best possible way, that allows the facts to be clarified, to address the victims’ pain and above all to prevent this from happening again,” government spokeswoman Isabel Rodriguez said on Tuesday.

“We’re not saying no,” Sánchez said last week while offering public support to Catalan writer Alejandro Palomas, who had admitted being abused as an eight-year-old by a priest in the mid-1970s.

“Thank you for your courage in sharing your moving testimony,” Sánchez tweeted.

“I assure you that your courage, and that of many others who have taken this step, will help us to address all the pain of all victims.”

Although the centre-right Ciudadanos party is in favour of an inquiry, the right-wing opposition Popular Party is opposed unless the initiative is broadened to look at “all institutions” within Spain.

The far-right Vox, Spain’s third-largest parliamentary force, is totally opposed to any such probe.

‘Has to be independent of state’

Fernando García Salmones, who was abused as a teenager and belongs to victims’ group Infancia Robada, said opening an inquiry “is a good option”.

“I just wish (all the parties) would agree to do something properly,” Salmones told AFP.

A Change.org petition launched at the weekend by abuse victim Miguel Angel Hurtado calling for an independent expert inquiry had gathered more than 55,000 signatures by Tuesday.

“What a parliamentary commission can do in the short term is to take emergency measures to fight against institutional paedophilia,” Hurtado told RNE radio. “An expert-led truth commission would allow for a complete quantification of the problem.”

“Spanish civil society will not accept a compromise between the government and the Episcopal Conference,” a grouping of Spain’s leading bishops, he told RTVE public television.

“Any investigation has to be independent of the state.”

Until now the Episcopal Conference, known as CEE, has ruled out any exhaustive inquiry, insisting last year it was “not going to proactively engage in a comprehensive investigation of the matter”.

“We are not going to proactively engage in a comprehensive investigation of the matter,” Monsignor Luis Arguello, the CEE’s secretary general said in September.

The Church “gives the appearance of doing something but it’s not,” says Juan Cuatrecasas, head of victims’ association Infancia Robada, or ‘stolen childhood’ in English.

“It is doing its homework very quickly and very badly,” he says, pointing to a bigger picture of “stonewalling and denial”. Within the Spanish church, the investigation procedure is different, with each diocese carrying out its own smaller, individual probes rather having an overarching inquiry, the CEE said.

It said it had put protocols in place where abuse cases were identified, as well as training for those working with youngsters and children.

In December, the Vatican opened an internal investigation after El País passed on a dossier containing 251 cases of alleged abuse between 1948 and 2018.

According to El País, the Vatican will supervise the CEE’s investigation of these cases, although AFP was unable to independently confirm this.

In another sign the state is moving towards accountability, the public prosecutor’s office has begun compiling details of ongoing criminal proceedings against clergy to get a more accurate picture of the situation.

“The case of the Church in Spain is… shameful,” says Fernando García Salmones, who was abused as a teenager at a school run by Roman Catholic priests in Madrid.

“They have no desire to know the truth,” the 60-year-old tour guide told AFP, saying the abuse destroyed his life and left him feeling “dirty”, “guilty” and “like a piece of shit”.