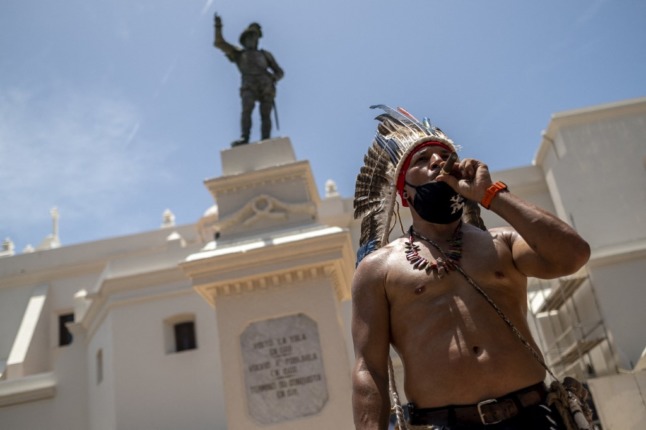 A member of the Council in Defence of the Indigenous Rights of Boriken dressed in Taino traditional clothing stands in front of a Juan Ponce de León statue during a march through Old San Juan, Puerto Rico on July 11, 2020. - The protesters demanded the removal of symbols honouring colonial oppression, starting with statues including those of explorer Christopher Columbus. (Photo by Ricardo ARDUENGO / AFP)

“Some individuals approached the statue,” located in a square in the historic center of San Juan, and “caused damage,” according to a police report quoted by local media.

The capital’s mayor, Miguel Romero, criticized the incident as an “act of vandalism” in remarks to news outlet El Nuevo Día, but sought to downplay the significance of the incident and the extent of the damage.

Felipe VI arrived hours later and was given a red carpet welcome. He was visiting Puerto Rico, a US territory, to mark the 500th anniversary of San Juan’s founding.

The city’s origins date back to 1521, but the official celebrations were delayed due to the Covid-19 pandemic.

Authorities indicated they were looking at security camera footage to help identify those responsible for damaging the statue.

Local media reported that a group known as the Boriken Libertarian Forces has claimed responsibility.

“Faced with the… visit of the King of Spain, Felipe VI, to Puerto Rico and the escalation of ‘gringo’ invaders taking over our lands, we want to send a clear message: Neither kings nor ‘gringo’ invaders,” the group wrote in a statement.

Before the statue was reinstalled, Rafael Capo, a 35-year-old history teacher, decided to climb the empty pedestal in protest.

For him, there is a direct link between the veneration of the Spanish colonial past, and Puerto Rico’s current political relationship with the United States.

“Five hundred years later, history continues to repeat itself… They keep importing people from outside to get rid of the locals,” he said, referring to current government policies that offer tax benefits to foreigners, mostly wealthy Americans.

Police removed Capo and other protesters so municipal authorities could reinstall the statue, which they said was not severely damaged. Ponce de León is known for leading the first official European expedition to Florida and serving as the first governor of Puerto Rico. Painting: Public Domain/Wikipedia

The statue was forged in 1882 in New York, with bronze obtained from British cannons captured after a failed attack on the Spanish in Puerto Rico in 1797.

Because the United States obtained the island from Spain at war, people born in Puerto Rico are US citizens who can move to the US mainland if they choose.

But because people born in Puerto Rico do not have normal voting representation in the US House of Representatives and Senate, political analysts widely consider their political status to be colonial.

They have their own legislature and a non-voting envoy to the US House.

The same lack of real and full voting rights in the US House and Senate is also faced by residents of the US federal district, Washington, DC; American Samoa, Guam, the Northern Mariana Islands, and the US Virgin Islands.