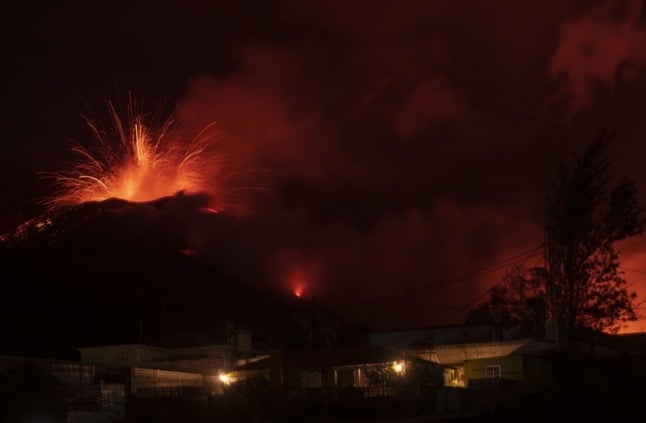 In this file photo taken from El Paso on December 13th, 2021 the Cumbre Vieja volcano spews lava on the Canary island of La Palma. Around 7,000 people have been forced from their homes since the volcano started erupting on September 19th. PIERRE-PHILIPPE MARCOU / AFP

Like other scientists around the world, he was eager to get a first-hand look at the rare and valuable data spilling out of the Cumbre Vieja volcano off Africa’s northwest coast.

“It’s a huge opportunity to learn,” said the scientist with Involcan, the Canary Islands Volcanology Institute.

“The more observations we make closer to the time that material has come out of the volcano, the more chance we have of making a scientific impact.”

A few kilometres from where the volcano shot up from flat ground on September 19th, he and other scientists have set up an improvised lab in a house provided by the local authorities.

Neatly lined up on tables inside are obscure volcanic rocks collected from the ash-covered ground around the volcano, all of them labelled ahead of further analysis.

“At the moment, this is by far the most closely watched volcanic episode that has ever happened in the Canaries,” Pankhurst said. The eruption, the first in La Palma since 1971, is the longest on record on the island of around 83,000 people.

No injuries or deaths have been directly linked to the eruption, but the lava flow has destroyed 1,345 homes, mainly in the island’s west, and forced more than 7,000 people to evacuate.

‘Collaborative effort’
At the foot of the fuming volcano, in an area closed to the public, scientists have been collecting lava samples, using metal sticks when it is still hot and hammers when it has cooled.

They then cut down the rocks into small samples that can be sent off to colleagues for analysis around the world. Samples of lava are stored at the stones laboratory near Los Llanos de Aridane on La Palma. (Photo by PIERRE-PHILIPPE MARCOU / AFP)

The volcano fell silent on Monday evening and scientists are cautiously optimistic that after three months of explosions and earthquakes, the eruption may be ending.

But at a lookout providing a clear view of the volcano, Maria Jose Blanco, the director of the National Geographic Institute in the Canary Islands, warned the area was still under observation.

“To be able to say that the eruption is definitely over, these parameters need to stay at similar levels for at least 10 days,” she said, standing in the square near a small church in the municipality of El Paso that has drawn scores of scientists, journalists and bystanders to watch the eruption.

Further down the slope at her institute’s control centre, some 70 experts have worked away since the start of the eruption.

They will have to keep monitoring the volcano even after it ends as the mountain will continue to spew toxic gases for a long spell, complicating life on the island.

‘Can’t ignore nature’
Governments must prepare better to face future volcanic crises, because population density is only increasing, said Blanco, whose frequent media appearances in recent weeks have made her a familiar face in Spain.

“We can’t live with our backs to nature and forget that this is a volcanic archipelago, that eruptions have occurred in the past and will continue to occur,” she said.

Since the autumn, the slow-moving lava has covered over 1,200 hectares (about 3,000 acres) of land on its way to the Atlantic, dealing a blow to the island’s two key industries — tourism and banana farming.

Also standing in the church square, Vicente Soler, a volcanologist with Spain’s National Research Council, said the eruption had hit the island where it most hurt. “The most populated and richest area economically for agriculture is this one,” he said of the land affected.

“The first month was very hard, because you saw houses burning and collapsing every day,” he added.

But the scientist, also a regular commentator on Spanish television, said he was proud to have monitored the eruption and hoped that attempting to explain the event could “to a small extent, help the local population.”

As Soler spoke, a young man recognised him and his trademark white hair from the news, and asked to take a selfie with him.

“Thanks for your work,” the young man said, before heading off. 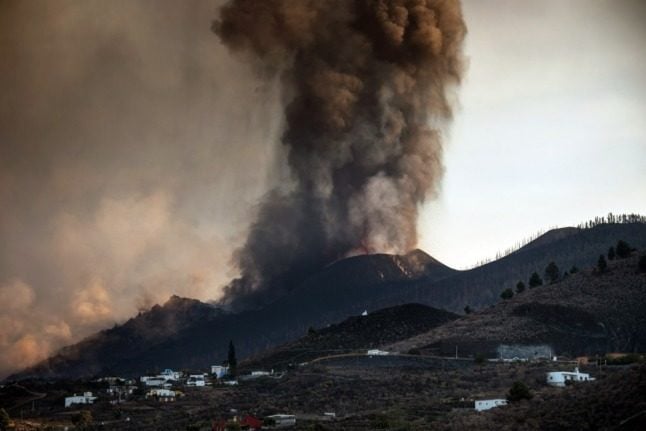 “It’s another world,” said Felix Rodriguez, a 61-year-old bricklayer, as he swept ash from the roof of his house to the terrace below.

He was one of around 1,000 people who were allowed to return to their homes this week, out of a total of 7,000 who were evacuated after the Cumbre Vieja volcano erupted on September 19th, spewing lava and thick plumes of ash into the air.

But like many of the others, he won’t be able to move back into his home right away.

In addition to blocking doors and paths with piles of ash, lava from the eruption damaged pipes, leaving him without running water.

The lava has also blocked a key road in the Aridane valley, forcing area residents to take much longer routes around the island for trips for basic services that used to take just five minutes.

While the red-hot lava miraculously spared Rodriguez’s home, it engulfed the neighbouring cemetery, leaving only a few tombs visible. No injuries or deaths have been directly linked to the eruption on the tiny isle, part of the Canary Islands which lie off Africa’s northwest coast.

But it destroyed over 1,300 homes, mainly on the western side of La Palma, and covered 1,250 hectares (about 3,100 acres) of land, including vineyards and plantations of bananas and avocados.

Carmen Acosta, 57, is one of the lucky few who on Monday was able to sleep in their home again for the first time after living in a hotel for over three months.

Her parents, who are in their 80s, live with her in the bright blue, one-story house that is surrounded by fruit trees and has a sweeping view of the Atlantic Ocean.

“We have a lot of things to clean,” said Acosta, as she was surrounded by plastic bags full of clothes, food and medicines which the family brought with them.

“Even in six months, it won’t be finished. There is a lot of ash, a lot of garbage… It’s horrible.”

In the affected area, mounds of ash engulf orange and apple trees, making them look like shrubs.

Gladys Jeronimo, a recently retired 65-year-old housekeeper, had looked forward to resting after decades of work.

“But for now this is all there is: sadness and cleaning and cleaning,” she said as she swept her porch.

Jeronimo said she felt “a lot of joy and helplessness at the same time”.

“Joy because it’s over, but helplessness because we can’t come back” permanently, since running water has not yet been restored, she said. Her neighbour Maria Zobeida Perez Cabrera, a 68-year-old caregiver, said her second home, which used to belong to her parents, was “horrible, like a graveyard,” because everything was covered in black ash.

“Everything around us was black, there was no soil, no roof, even the plants were black,” she said as she loaded a wheelbarrow with ash.

Ruben Lopez, a geologist with the Spanish geographical Institute, said winds will blow “much” of the ash into the sea.

While the surface of the lava has cooled, the flows “still store a lot of heat,” he added.

“This will last weeks, even months, and in addition they release gases,” he said.

It will be easier to build on top of lava that has cooled than to remove it, he added.

‘Throwing in the towel’

Like thousands of others, Jorge Diaz Hernandez does not know when he will be allowed to return to his home.

“This is the million euro question,” the 36-year-old said with a shrug at a mountaintop lookout in the municipality of Los Llanos de Aridane.

During the eruption he came regularly to this spot to see if the banana plantation he has run for the past decade had been affected.

It was spared the lava, but Diaz estimated it will take three years to restart production because of the ash damage.

“I am throwing in the towel, I will dedicate myself to something else,” he said.

“I was already tired of the way agriculture and bananas are treated, the low prices, the cost of water, all that. This is the straw that breaks the camel’s back,” he added. 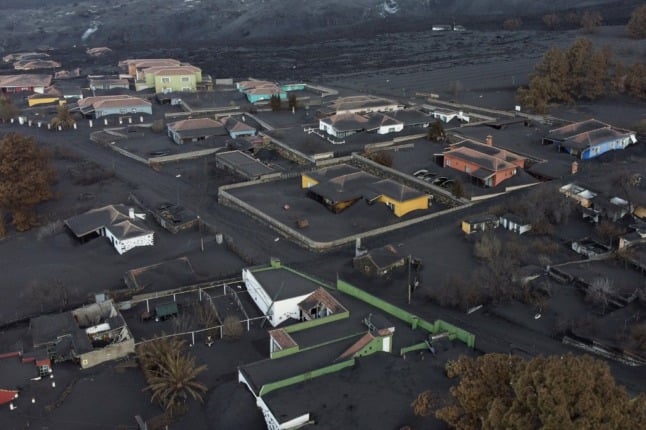 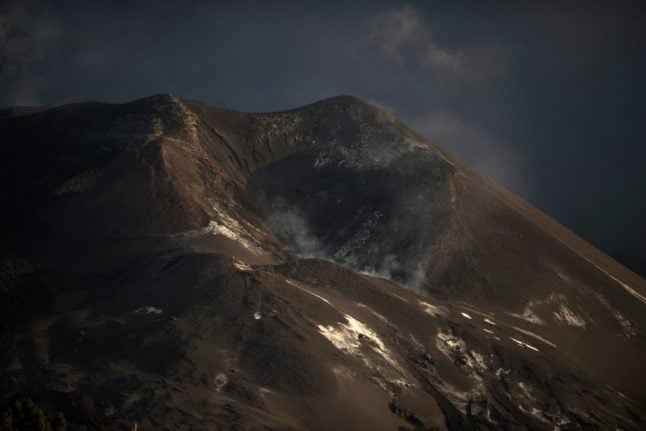