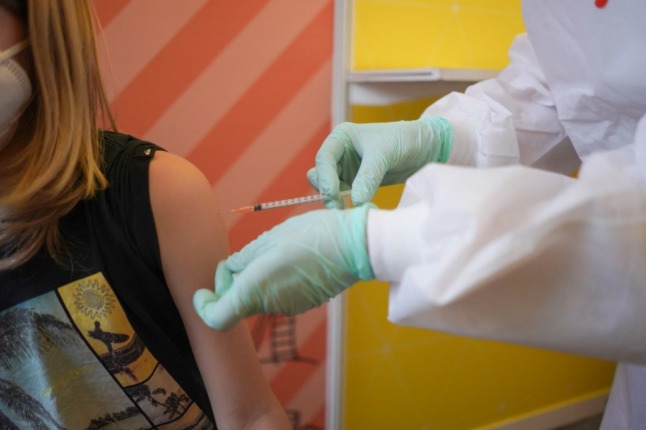 A ten-year-old girl is vaccinated against Covid-19 at a vaccination centre for children at the museum of natural history in Berlin, on December 15th 2021. Photo: Jörg Carstensen/AFP

The EU health agency ECDC on Wednesday warned that vaccinations alone would not stop the rise of the Omicron variant of the novel coronavirus, and said “strong action” was urgently needed.

“In the current situation, vaccination alone will not allow us to prevent the impact of the Omicron variant, because there will be no time to address the vaccination gaps that still exist,” Andrea Ammon, director of the European Centre for Disease Prevention and Control (ECDC), said in a statement.

The agency meanwhile also raised their risk assessment for Omicron’s impact on public health from “high to very high” to “very high”.

The agency called for strengthening and reintroduction of “non-pharmaceutical interventions”, such as mask-wearing, hand hygiene, distance working and prevention of crowds in public spaces.

“It is urgent that strong action is taken to reduce transmission and alleviate the heavy burden on health care systems and protect the most vulnerable in the coming months,” Ammon added.

Ammon said that “there are indications that community transmission is already ongoing in EU/EEA countries”, and that modelling suggested that a further rapid increase in Omicron cases was “imminent”.

EU health commissioner Stella Kyriakides said the report from the ECDC showed that “the coming months will be difficult”.

“Omicron is likely to come in a big wave, bringing renewed pressure on health care systems,” Kyriakides said in a statement.

She stressed that 66 percent of the EU population had been fully vaccinated, but said the countries of the union could do better and that “boosters should be our wave-breaker”.

“We need utmost respect of public health measures, combined with a rapid increase in booster vaccination to address Omicron,” Kyriakides added, noting that it was “very worrying” that some countries lagged in their vaccination rollout and that 50 percent of the populations in four member states were still not fully vaccinated.

World Health Organization (WHO) chief Tedros Adhanom Ghebreyesus said Tuesday that the Omicron variant had been reported in 77 countries and had “probably” spread to most nations undetected “at a rate we have not seen with any previous variant”.

Tedros also cautioned against “dismissing Omicron as mild”, pointing out that even if the variant does cause less severe disease, “the sheer number of cases could once again overwhelm unprepared health systems”.

‘We have enough vaccines in Europe’

Earlier on Wednesday EU chief Ursula von der Leyen warned the Omicron variant of Covid-19 could become dominant in Europe next month, but said her 27-nation bloc had ample vaccines to fight the pandemic.

“If you look at the time it takes for new cases to double in number, it seems to be doubling every two or three days. And that’s massive. We’re told that by mid-January, we should expect Omicron to be the new dominant variant in Europe,” von der Leyen told the European Parliament, pointing to scientific data.

“But over the last year, we’ve worked hard and we’ve achieved a great deal and that is why Europe is in a better position now to fight the virus,” she said.

“We’re now in a position to produce 300 million doses of the vaccine per month here in Europe,” she said.