A woman feeling under stress at work. Photo: Getty Images

Competing as an elite athlete may seem far removed from your everyday working life. But the increasing willingness of many athletes, celebrities, and even royalty to talk openly about their personal mental health challenges has wider societal implications.

After moving abroad, it can be difficult to deal simultaneously with an unfamiliar culture, different ways of doing things at work, and a new language. If you moved shortly before or even during the pandemic, things may have been even more challenging for you; you may have been working mainly from home with few chances to meet colleagues, and feeling the distance to family in your home country more than ever.

If you feel concerned about your mental health while living abroad or during an overseas assignment, what should you do? The Local has partnered with AXA – Global Healthcare to offer some guidance for individuals and examine why employers have a crucial role to play.

Working abroad? With AXA’s global health plans, you can speak to a psychologist from wherever you are in the world1

Depression affects more than 300 million people globally, with more than 260 million living with anxiety disorders2, according to the World Health Organization (WHO). The cost to the global economy is around US$1 trillion each year. Furthermore, WHO says that mental health problems can “seriously exacerbate” physical illness. Despite the scale of the problem, countries spend less than two percent of their national health budgets on mental health on average, says WHO.

But are attitudes changing and will mental health eventually be given equal billing with physical health? The reasons for companies to make the mental health of their employees a top priority keep growing.

Opening up about your mental health can be uncomfortable. If you’re feeling low, you may feel you just need to somehow carry on regardless. But it’s important to know that early intervention has proven more effective than trying to continue as feelings of stress or anxiety build up.

So, what should you do if you want to get a realistic assessment of your mental wellbeing? Rather than waiting for a crisis, you can turn to online tools, such as AXA’s LowMoodQuiz and AnxietyQuiz, to honestly assess your state of mind. Such tools are intended to help you as you deal with everyday stresses and strains, not only when a major event occurs. A young man crying in his workplace. Photo: Getty Images

What if you know you’re struggling and feel the time has come to seek help? Here are three different ways you could start a meaningful conversation with your manager, according to AXA – Global Healthcare:

AXA suggests managers can look out for signs that an employee could be struggling with their mental health. If you have a benefits package, your employer or manager could also share details of the support available through that, such as confidential ‘virtual therapy’ by phone or video call. As a global leader in health insurance, AXA has multiple levels of health cover to fit your needs, giving you access to local healthcare professionals and facilities.

If you’re a member with a global healthcare plan, you can use AXA’s Virtual Doctor service³ to confidentially discuss anything you like. If it’s mental health support you need, they’ll refer you to the Mind Health service, to speak to a fully qualified psychologist.

Find out more about how AXA – Global Healthcare can support you

1. The service provides you with up to 6 sessions with a psychologist, per mind health concern, per policy year. Available with a healthcare plan from AXA – Global Healthcare.

2. Research commissioned by AXA found that anxiety and depression were among the top health and wellbeing concerns for expats.

3. The Virtual Doctor and Mind Health services are provided by Advance Medical (a Teladoc Health company).

This article was produced by The Local Creative Studio and presented by AXA. 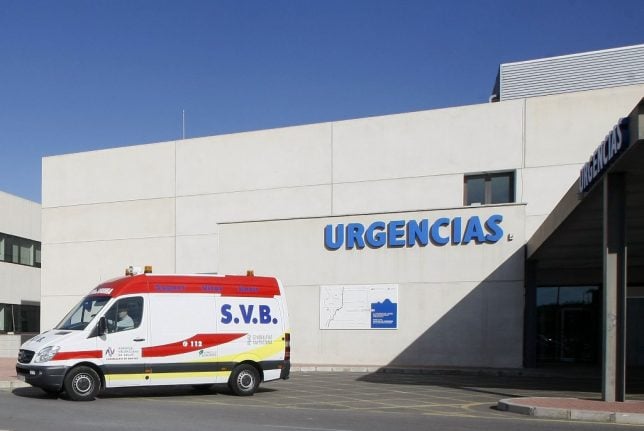 Up to 15 British insurance companies are selling UK tourists private policies that offer what’s already available to them for free as EU citizens through Spain’s public health system.

That's according to Spain’s Private Health Alliance (ASPE), who alarmed by the spike in cases involving tourists unknowingly stuck in Spain without private health cover, have decided to publicly denounce what’s happening in tourist hotspots around the country.

“For years these companies have been selling insurance policies that are empty of any content,” David Medina, member of ASPE’s board of directors, told a press conference.

The recent death of 72-year-old Brit Martin Blake, who had a heart attack while on holiday in Lanzarote, has brought to light the serious repercussions of these cases of “potentially systematic fraud”.

“Martin Blake died due to inaction on the part of the insurer when it came to transporting the patient to another hospital which was equipped to treat him,” Medina explained.

ASPE argues that whenever a supposedly insured person has health problems abroad, the insurance companies in question simply redirect them to a public hospital rather than a private clinic. If they arrive at the ER of a private facility, “they force them to be moved to a public hospital, even if the patient is in no condition to be moved,” Medina states.

It’s also almost always left up to Spain’s public health system (and eventually Britain's NHS) to foot the bill for these transport costs and any other services that should be paid for by the so-called insurance companies.

According to Medina, the general argument they use is that private Spanish clinics “lack the means, they carry out fraudulent practices and they don’t even have medically qualified staff”.

The Blakes were informed by doctors at one of Lanzarote’s public hospitals in the capital Arrecife that they wouldn’t be able to offer the elderly man the attention he needed, suggesting instead that he be moved to a private clinic on the Canary island or repatriated back to the UK.

But his insurance company, “capable of carrying out a diagnosis from 2,000 kilometres afar” Medina states sarcastically, thought the 72 year old was fine where he was.

“They seemed perfectly happy with the fact that my dad was costing the Spanish health system money,” Blake’s daughter told The Times at the time.

Sadly, Martin Blake passed away two days after his repatriation to the UK.

According to ASPE, every day there are on average one to four Brits who suffer the consequences of these scams while on holiday in Spain, costing Spain’s health system €4,000 per patient, money they never see again.

The same has happened to private clinics where doctors have agreed to treat patients in need, under the pretext that the clinics would be reimbursed by the British insurers.

“This has resulted in the loss of anywhere between €75 and €100 million for Spain’s private health industry,” ASPE secretary general Carlos Rus told El Mundo.

“They're making a killing out of old people, charging them very expensive policies and assuring them that they’ll be covered for pre-existing conditions,” Medina added.

“As they never pay any healthcare costs they’ve seen their profits shoot up, it’s illicit enrichment with total impunity.”

The organisation estimates that up to 300,000 Brits travelling abroad every year are being ripped off by paying high prices for “opaque” policies that offer exactly the same medical services as the European Health Card.

The investigation has reportedly not drawn many conclusive results thus far, but the company that Martin Blake was reportedly insured by is under scrutiny.

European Health Insurance Cards (EHIC) currently offer Brits and other EEA citizens free medical treatment (or at a reduced cost) if they urgently need it while visiting another member country.

If the UK leaves the EU without a deal on October 31 2019, British people's access to healthcare when visiting an EU country is likely to change.

SEE ALSO: Will Britons resident in Spain still get healthcare after Brexit?