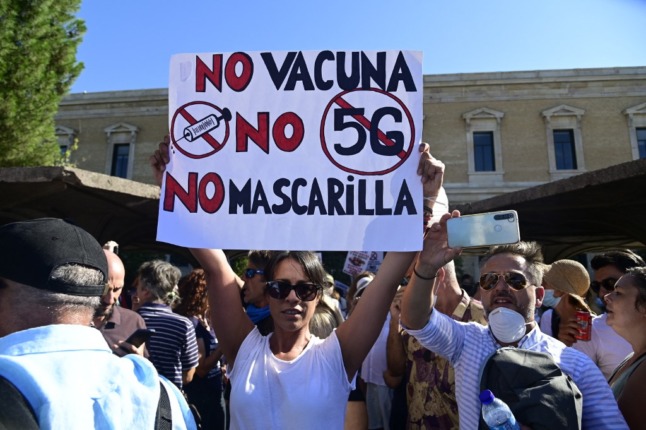 A woman holds a sign reading "No vaccine, no 5G, no face mask" during a demonstration in Madrid against Covid-19 vaccines and the mandatory use of face masks. (Photo by JAVIER SORIANO / AFP)

Around 4 million people over the age of 12 who could have been vaccinated against Covid-19 already haven’t done so thus far.

A study by Spain’s Sociological Studies Centre (CIS) published on Wednesday found that almost half of Spaniards – 46.2 percent – think the Covid-19 vaccine should be compulsory for everyone.

Asked if they believed health staff, care home workers and employees who deal directly with the public should be obliged by law to be vaccinated, 67.3 percent responded yes.

These high figures are perhaps unsurprising given the degree of Covid vaccine acceptance in Spain.

Almost 90 percent of all eligible people have now been fully vaccinated and Spanish regional health departments are not facing any hesitance as their Covid booster shot campaigns gather pace.

Even though Spain’s epidemiological situation is so far considerably better than in other parts of Europe, Covid infections are growing at a faster rate every day, and many autonomous governments are now calling on stricter measures for unvaccinated people in particular a month away from Christmas.

So will the Spanish government ever consider placing unvaccinated people under lockdown or making vaccines mandatory as has happened in Austria?

“It would breach fundamental human rights.”

Spain does not have the legal umbrella to place people who have not been vaccinated under lockdown or make Covid-19 vaccination compulsory.

In fact, the country’s two states of emergencies – during which the initial full lockdown and other restrictive measures could be imposed by the regions without the courts’ consent – have both been declared unconstitutional.

The Covid health pass, widely used across Europe to control access to bars, restaurants and other establishments, never took off in Spain because local judges kept overruling their implementation, for the most part labelling the health passport requirement as ‘not ideal’ or ‘disproportionate’.

Regional leaders such as Andalusia’s health head Jesús Aguirre or Cantabrian president Miguel Angel Revilla have admitted in the past days that they’re watching the tough action being taken in Austria and now also Germany with a degree of envy.

“I’m all in favour of individual freedoms as long as they don’t negatively affect others, there’s no right for these people to risk others’ lives just because they don’t want to get vaccinated,” the outspoken Revilla said.

“More than restrictions, I ask that everyone be vaccinated, by hook or by crook.”

No vaccine is compulsory by Spanish law, and since the pandemic began the Spanish government has made it clear that the Covid-19 vaccination would be voluntary, at no time using a forceful rhetoric.

This has clearly contributed to the success of the campaign overall, but with most of the hard work completed, many feel it wouldn’t be justified for unvaccinated people to spoil the progress made, especially if they form part of certain groups.

For example, the Catalan Federation of Intellectual Disability (Dincat) has repeatedly appealed to the regional government to carry out a legal reform that establishes mandatory vaccination among health professionals who work with risk groups.

Unvaccinated health workers in Spain represented 7 percent of the total in September, according to official stats.

The head of Spain’s Businesses Association CEOE has also called for vaccines to be compulsory, arguing that for “the economy and tourism to flow and society to function… those who do not want to be vaccinated will have to stay at home.”

But the fact remains that regional governments – especially now that they don’t enjoy the freedoms granted to them under the states of alarm – cannot pass any emergency law which will force health workers or other unvaccinated groups to get the jab, and most officials are well aware of that.

At best, they want the government to pass a ‘pandemic law’ which will give them some extra powers to legislate, and their primary focus is having the Covid health pass accepted by Spanish courts or for their ruling not to count.

According to Spanish health law expert José Bestard, even if Spain did want to replicate the Austrian example of locking down its unvaccinated or consider making vaccines mandatory, “it certainly could not do so through the state of alarm decrees”.

There is no legal framework to force either scenario. Decrees could be introduced but they would have to be regulated by law because current legislation protects the patient’s right to decide. And just like what happened with the states of alarm, such laws could end up being considered unconstitutional.

It would in effect result in a collision between the fundamental rights of each individual and collective health.

There is one example in which judges in Spain favoured public health over individual freedoms: an outbreak of measles in Granada in 2010 which arose when a group of parents did not want their children vaccinated against the disease.

In this case, public authorities took the matter to court and judges ruled the families to be vaccinated in the interest of public health.

The Austrian government on Friday announced that the country will go into its fourth nationwide lockdown and will make Covid-19 vaccines compulsory, as leaders again pleaded with the public to get their vaccines.

The German government and states have also agreed on nationwide rules that would see unvaccinated people excluded from many public places, and vaccinated people will have to take Covid tests if the situation worsens.