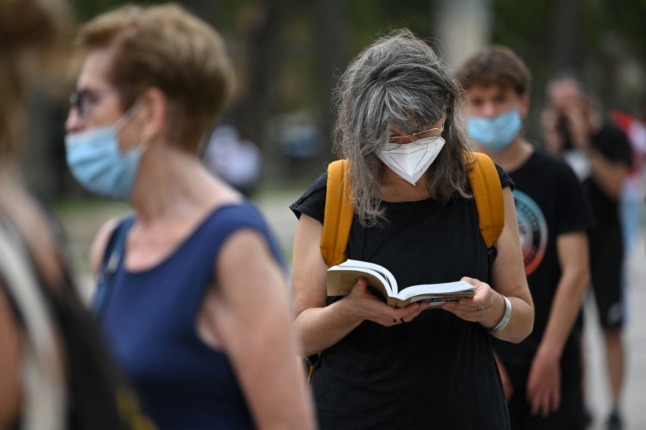 As Covid-19 infections continue on their slow but increasingly faster upward trajectory in Spain, the national health ministry headed by Carolina Darias presented on Monday a new way of evaluating Spain’s epidemiological situation.

Their argument is that the current traffic light system is no longer an accurate measuring bar of the risk Covid-19 poses to public health as it was developed before the country began vaccinating its population, with more than 90 percent of those eligible now with at least one dose.

Even though the rest of Europe is seeing Covid infections spike and in Spain the prevalence of the virus has been increasing for the last two weeks, for the Health Ministry the country’s situation is still “very favourable, with a marked decrease in serious cases and deaths”.

For infection rates under 50 per 100,000, the infection risk would be classified as “under control”.

The updated system would also classify regions with 100 to 300 infections per 100,000 inhabitants as being at medium risk rather than the current 50 to 100 threshold.

This in turn would mean the high-risk bar would be twice as high as it is now: 300 to 600 fortnightly Covid infections per 100,000 people.

Crucially, when towns, cities or autonomous communities enter this high risk category is when local authorities have the justification to impose stricter Covid restrictions, if they get the backing of local courts.

It hasn’t taken long for most of Spain’s regional governments and health experts to comment on the proposed new traffic light system.

Madrid Health director Enrique Ruiz Escudero said on Tuesday that it “made no sense” to modify the current indicators.

“The infection rate has never been an indicator of how the real pace of this pandemic is measured, which in addition to infections, is above all with the care response and the extra factor of vaccination,” said the health head of the region that’s had Spain’s most lenient restrictions during the pandemic.

Spain’s health authorities do use other evaluating meters such as hospitalisations, ICU admissions, positive test rates and deaths to determine the severity of the pandemic, but the infection rate has continued to be the go-to measuring tool for regional governments and the Spanish press.

“To continue considering only the accumulated incidence and giving greater importance to this indicator compared to others, is no longer enough,” said Óscar Zurriaga, vice president of the Spanish Epidemiology Society.

For Joan Carles March of the Andalusia’s Department of Public Health, the new traffic light “does not contribute anything”, and can generate “an inappropriate situation in the perception citizens have of the existing levels.”

On the other hand, Galician regional president Alberto Núñez Feijóo is in favour of the modified traffic light system so that it better reflects the relationship between the level of infections and hospital admissions after the arrival of vaccination.

However, the general response to the new system has been lukewarm at most, especially in regions such as the Basque Country, Navarre and Aragón where higher infection rates are already pushing authorities to think of bringing back restrictions.

As a result, Spain’s Public Health Commission on Wednesday decided to shelve the update of its ‘Coordinated Covid response’ guidebook for the regions due to this lack of support.