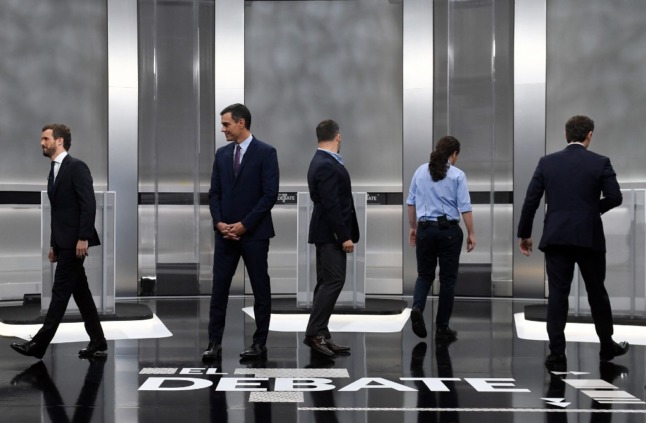 The five main candidates for Spain's presidency in 2019, two of whom have now been replaced by women as party leaders (Pablo Iglesias and Albert Rivera, both on the right). Photo by PIERRE-PHILIPPE MARCOU / AFP)

Spanish politics is often difficult to understand for foreigners. Not only the language, but the number of parties and coalition governments, the new parties that pop up, and then seemingly disappear, the fractured power structures of regional and national governments.

Foreigners in Spain probably became more familiar with some politicians during the COVID-19 pandemic, both at a regional and national level, as the faces of certain politicians – Prime Minister Pedro Sanchez and pandemic spokesman Fernando Simón in particular – were on their TV screens every night.

But to really integrate into Spanish life, a better understanding of the political system – and how it affects your life – can help. Read The Local’s guide to Spanish politics to learn the basics:

What is the Spanish system?

Like the UK, Spain is a constitutional monarchy. Spain’s King Felipe VI is the ceremonial head of state, but the democratically elected Prime Minister heads the national government.

The basis of the Spanish political system is the 1978 Constitution, written during the ‘la transicion’ from Franco’s dictatorship to democracy.

How is the Spanish government structured?

The 1978 constitution outlined the separation of powers into the executive, legislative and judicial branches:

You may have noticed during the pandemic that different regions had control of their own COVID-19 restrictions. This is because regional politics play a much greater role in Spain, and the autonomous communities (Comunidades Autónomas), as they are known, also have an executive and a legislative body, with their own Statute of Autonomy, approved by the national parliament.

The exact structures differ depending on the region, and additional powers of devolution are given to the regions with particularly independent histories and cultures in the Basque Country, Catalonia, and Galicia, and the regional parties can often prove tricky partners for the national government.

Who are the main players and their political parties?

Although the UK does, technically speaking, have a multi-party system, one major difference between British and Spanish politics, and something that also might seem a little strange to our American readers, is that in Spain there are several parties that can affect national politics – and thus, your life – and tens more at the regional level that can have an effect of regional politics that can then have a knock-on effect at the national level.

At the national level however, the government has been headed by one of two parties since the early 1980’s.

Here are the major players to know in Spanish politics:

Partido Socialista (PSOE): The major partner in the current coalition government. Founded in 1879 and known as the Spanish Socialist Workers’ Party in English, PSOE is the oldest party in Spain, and is generally perceived to be, or its policy platform is largely made up of, what we would understand in the UK and US as largely centre or soft left. The current leader is Prime Minister Pedro Sánchez, known internationally as ‘el guapo’.

What their voters generally like: PSOE’s generally economically and culturally progressive approach, pro-European and cooperative with regional groups.

Partido Popular (PP): Much younger than PSOE, PP (Partido Popular or the People’s Party in English) was founded in 1976 and has historically been a conservative, Christian-democratic ideology, although the emergence of Vox has forced the party rightward on certain cultural issues. The party was in power until 2018 when corruption downed the Mariano Rajoy government, and its current leader is Pablo Casado, although a future leader could be Isabel Díaz Ayuso, the President of the Madrid community, who is gaining popularity for her populist campaigning.

What their voters generally like: They’re fans of the PP’s stance on small-state governance, low taxes, pro-business, traditional values, bullfighting, and patriotism.

Unidas Podemos (UP): widely referred to as ‘Podemos’, is a grouping of progressive parties born from the 15-M anti-austerity movement.These include Podemos, Izquierda Unida, and several other fringe groups. Podemos is an anti-austerity, anti-corruption, democratic-socialist party, although some of its views may be perceived as far or hard left. Since 2020 Podemos has been the junior coalition partner in government. The new leader is Ione Belarra, who took over their former leader Pablo Iglesias, the divisive former Deputy Prime Minister that’s also famous for his long ponytail.

What their voters generally like: The fact that UP is anti-establishment, anti-facist, anti-austerity and sympathetic to regional identities.

Ciudadanos (Cs): The ‘Citizens’ party in English, Ciudadanos was born in Catalonia in the mid-2000’s. Although founded on social democratic principles, the party has drifted rightward and is now widely considered a centrist, liberal-conservative, pro-European party. The current president is Inés Arrimadas, and after some initial electoral success the party suffered setbacks in the 2019 elections.

What their voters generally like: that CC is centrist, middle of the road, pro-EU and would likely go into coalition with either PP or PSOE.

Vox: You’ve probably heard of Vox as some of their views grab headlines. They are considered hard or far-right, populist, and have particularly hard anti-immigrant, LGBT, and Islam stances. Founded by former PP members in 2013, Vox found electoral success on both a national and regional level in both 2019 elections, becoming the biggest party in the Murcia regional congress. Vox is led by the controversial Santiago Abascal, and have been constant and vocal critics of the POSE led government and Prime Minister Pedro Sanchez in particular. For those British readers who like to take trips to Gibraltar now and then, Vox is vocal about the issue and believes Gibraltar is rightfully Spanish.

What their voters generally like: They see the party as anti-establishment, anti-immigrantion and Islam; pro-centralisation and law and order; anti-separatist; patriotic and an upholder of traditional Spanish values.

Just like the rest of the world, Spanish politics has been upended by the COVID-19 pandemic. With case rates low, for now, Sanchez’s government is now turning its focus to the economic recovery, particularly the hard hit coastal regions that rely on tourism, and its forthcoming budget for 2022 that is taking up a lot of political capital.

Catalonia is almost always an issue in Spanish politics, and it is no different for the current government. This is particularly true following his pardon of nine seperatist leaders who led a failed independence bid in 2017, and the pardon has created pressure from the right and protests in the streets. The move, Sanchez hopes, will help to diffuse the Catalan issue.

Cultural issues also promise to dominate Spanish politics in the near future. Whether it be the status of bullfighting, or dealing with the surge in anti-LGBT hate crimes across Spain, Sanchez’s government faces political battles with both PP and Vox as the culture war rhetoric that dominates the British and American political spheres take hold of Spanish politics.

Although Spain’s electoral cycle is notoriously unpredictable, Spain’s next general election is scheduled for 2023. The latest polls give PP a slight advantage over PSOE, at 28% and 25% respectively, with the Vox vote stabilising and a 5% lead over Podemos. A PP-Vox coalition could be on the cards for the next parliament.