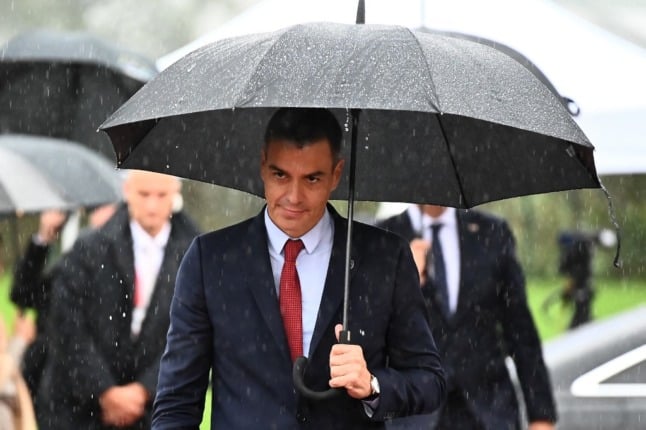 Spain's Prime Minister Pedro Sanchez, seen here at the EU-Western Balkans summit in Slovenia in October 2021, will increase his wages by 2 percent in 2022. His salary (Photo by Joe Klamar / AFP)

Spain’s coalition PSOE and Unidas Podemos government has decided that the 2 percent salary increase agreed for civil servants in 2022 should also apply to the Prime Minister and his ministers.

This same salary bump-up was rejected a few weeks ago in the Spanish Parliament and the Senate for deputies and senators, but members of the Spanish government have included a wage increase for themselves in the country’s 2022 general budget, as presented by Tax Minister María Jesús Montero on Wednesday.

Three million public workers (funcionarios) in Spain will also benefit from a 2 percent wage increase in 2021.

Last year, the Spanish government had also initially decided it would raise ministers’ wages but u-turned on the decision at the last minute.

How much will Spanish PM Pedro Sánchez now earn?

Spain’s three Deputy Prime Ministers Nadia Calviño, Teresa Ribera and Yolanda Díaz – all of whom hold other ministerial roles – will each earn €81,341 if the rise is finally approved.

All other ministers that form the Spanish Council of Ministers will see their wages climb from €74,858 to €76,355 gross a year.

The average gross annual salary in Spain in 2021 is €24,009, although there are big regional differences.

Interestingly, Pedro Sánchez’s wages are not the highest among all Spanish officials.

The salaries of members of Spain’s Constitutional Court are the highest among all the high positions of the Spanish State and the president of this body, Juan José González Rivas, has the best paid position of all: €160,728 gross a year.

How do Pedro Sánchez’s wages compare to other world leaders’?

The highest paid head of state is Singapore’s Lee Hsien Loong, with annual earnings of €1.38 million, followed far behind by Guy Parmelin of Switzerland with €456,900.