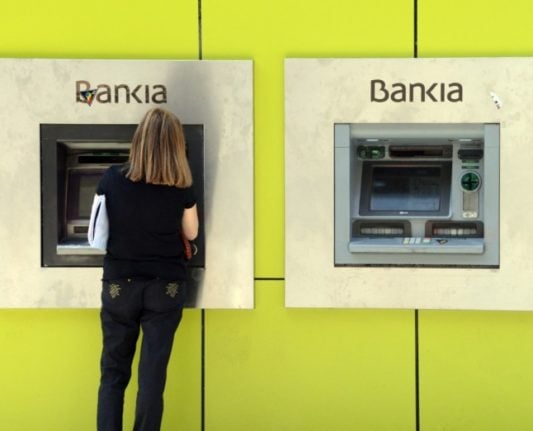 In five years, taking out money in Spain may involve a trip to the supermarket or a visit to the post office. Photo: Dominique Faget/AFP

Since the Covid-19 pandemic began, Spanish banks have closed 2,200 of their ATMs across the country.

This means that there are currently 48,300 cajeros (ATMs in Spanish), levels not seen since 2001.

The disappearance of ATMs has often come as a result of the recent closure of the hundreds of bank branches that they’re attached to.

This is part of a huge shift toward digital banking services rather than in-person customer service by Spain’s financial entities.

There are now the same amount of bank branches in Spain as in 1977.

The banks justify the closure of branches and ATMs by highlighting the increasing trend among account holders to pay by card rather than cash, as well as handle other banking processes online.

The pandemic has only served to further vindicate Spanish bank’s cost-cutting move (ATM withdrawals dropped by 31 percent),  but the trend was already being seen before Covid-19.

Who is the closure of ATMs in Spain affecting most?

Despite Spain’s population becoming more internet-savvy and accustomed to card payments, cash is still the preferred method of payment in the country.

For some, this legal tender is the only means of payment they know or that they can use.

Branch and ATM closures are therefore affecting in particular the elderly and residents of small rural communities in so-called ‘Empty Spain’.

To paint a picture of the situation, when the only bank branch in the village closes its doors for good, getting your hands on money can become a lot more challenging.

This rings especially true in rural areas in the Spanish regions of Castilla y León, Galicia, Aragón and Andalusia, where people, especially the older population, are finding it harder and harder to access their pensions and deal with online banking systems.

The Bank of Spain has warned that almost three percent of the Spanish population, around 1.3 million people, struggle to get their hands on legal tender.

The European Central Bank also recognises that these groups are at risk of financial exclusion as a result of Spanish banks’ changing strategy. Is there a silver lining?

Whereas the number of bank ATMs is dropping, other cash dispensers are being set up in Spain, often following agreements between the banks and third parties.

Spain’s national post service Correos has announced that in 2022 it will install 1,500 ATMs across all of Spain’s regions, 300 of them in small rural areas with a population under 3,000 which currently don’t have a single cajero at their disposal.

Correos’ new automatic teller machines will not only be set up at their post offices but in shopping centres and in other strategic street locations.

All debit and credit cards belonging to Spain’s main banks will be able to be used and Correos will not charge users any commission, although the banks themselves may charge a fee depending on their conditions.

Correos has also signed a deal with Santander to allow their bank customers to withdraw money at the post office counter as if they were at one of Santander’s branches, as well as for postmen to be able to deliver cash in person to customers.

Withdrawing money at shops, often referred to as getting cashback, is also slowly becoming an option in Spain.

German company Viafintech has launched Cash 26 in Spain, which allows N26 bank account holders to withdraw money from a growing network of shops that have signed up to the scheme.

ING bank also has a similar app service called Twyp which allows customers to withdraw cash at DIA supermarkets and other stores, and French neobank Nickel is also starting to offer such services as well in Spain.

Furthermore, Spain’s lottery associations are in talks with the Bank of Spain to find a way for their kiosks and small lottery shops to also serve as cash dispensers for people struggling to find other ways of withdrawing cash.

Fortunately, even though banks are focusing their in-person services on financial products, mortgages and investment rather than over-the-counter withdrawals, new options are emerging.

In five years, taking out money in Spain may involve a trip to the supermarket or a visit to the post office rather than searching for an ATM belonging to your bank.

LIFE IN SPAIN
What to do about insects and other pests in your Spanish home?