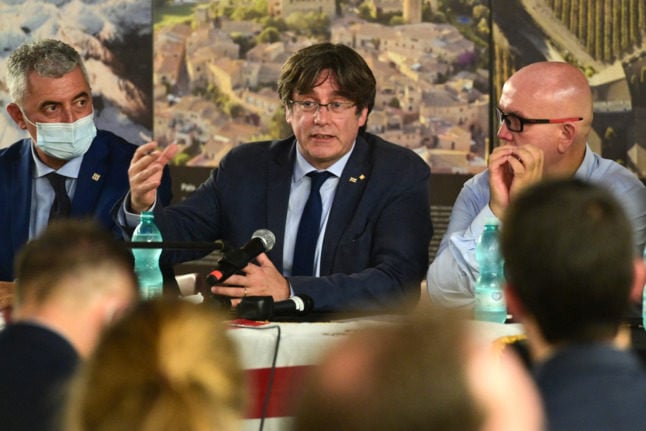 (From L) Alghero's mayor Marco Conoci, exiled former Catalan president Carles Puigdemont and his lawyer Gonzalo Boye give a press conference in Alghero, on the island of Sardinia on September 25th, 2021. Four years after Catalonia's failed bid to break away from Spain, Puigdemont's brief arrest has turned the spotlight back on separatist hardliners who firmly oppose dialogue with Madrid. MIGUEL MEDINA / AFP

Puigdemont, 58, was arrested in Italy on September 23rd but released a day later pending an extradition hearing in Sardinia on Monday.

He is wanted by Madrid on charges of sedition for leading a failed Catalan bid to declare independence in October 2017, fleeing to Belgium to avoid prosecution.

His arrest in Sardinia came barely a week after the left-wing government of Prime Minister Pedro Sanchez and the regional Catalan authorities resumed negotiations to find a solution to Spain’s worst political crisis in decades.

“This arrest suits all those who want to do away with the negotiations. It suits (Puigdemont’s hardline) JxC party and the Spanish right,” said Ana Sofia Cardenal, a political scientist at Catalonia’s Open University.

There has been a significant thaw in the relationship since Pere Aragones, a moderate separatist from the left-wing ERC, was elected as Catalan leader in May, taking the helm of the region’s separatist-dominated coalition.

The shift had an immediate effect: within weeks, the Spanish government had pardoned nine separatist leaders jailed over the independence bid and agreed to resume top-level talks on the Catalan crisis.

ERC favours a negotiated strategy to achieve independence via dialogue with Madrid, while its junior coalition partner JxC wants to maintain a confrontational approach.

‘Confrontation can’t be avoided’
Led by Puigdemont, hardliners have criticised Aragones for engaging in talks despite Madrid’s absolute opposition to allowing another Catalan independence referendum — one of the separatists’ key demands.

“Confrontation with the (Spanish) state cannot be avoided,” Puigdemont said early last month, just before JxC said it wouldn’t be joining the talks.

Exactly four years ago, on October 1st, 2017, Puigdemont’s regional administration staged a referendum banned by Madrid, then issued a short-lived declaration of independence, unleashing a crisis which has yet to be resolved.

“It’s clear that Carles Puigdemont must be brought to justice and stand trial” over his involvement in the independence push, Sanchez said a day after his arrest in Sardinia.

Puigdemont’s lawyers insist there is no legal basis for his arrest, nor for his extradition.

Although Puigdemont enjoyed immunity for a time after being elected an MEP in 2019, that was lifted by the European Parliament in March in a decision upheld by the EU’s General Court in July.

However, the European Parliament’s decision is being appealed, pending a final ruling by the EU court.

Tricky balancing act
Although Puigdemont’s media profile in Spain has been lower since his election to the European parliament, he still plays “an important role in Catalan politics as head of JxC”, said Toni Rodon, a political scientist at Barcelona’s Pompeu Fabra University.

And it is a role that has left ERC in a tricky position, forcing it into a delicate balancing act between its talks with Madrid and its relationship with JxC.

After Puigdemont’s arrest, Aragones joined the chorus of condemnation and even went to Sardinia in a show of support.

But he didn’t cut ties with Madrid and was quick to defend dialogue with Sanchez’s minority government, which ERC has been supporting in parliament.

“It would be very costly for him to backtrack now because the strategy defended by JxC is precisely that: one of confrontation and not negotiation,” said political scientist Cardenal.

“What the average voter wants is for their problems to be solved,” she said, because “we are beginning to see that (the ongoing separatist crisis) is costing the Catalan economy”. 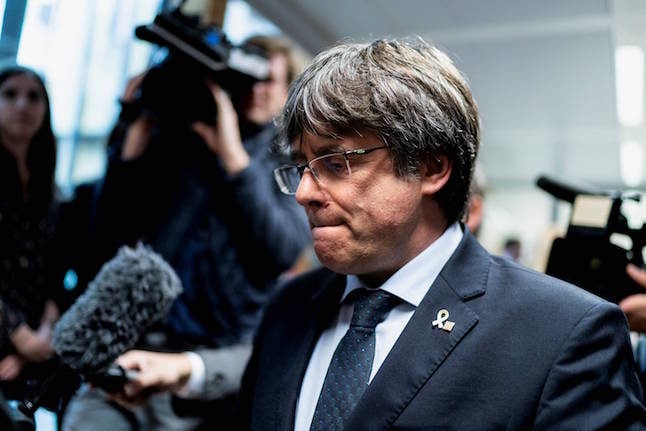 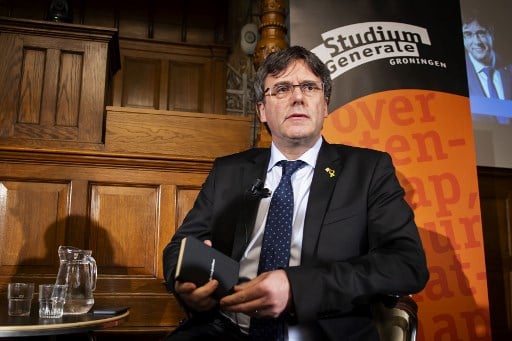