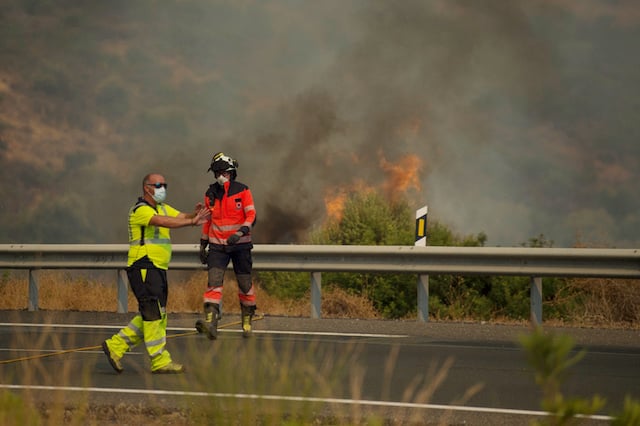 The 44-year-old was one of around 400 firefighters tackling the flames
which had broken out late Wednesday in the Sierra Bermeja mountains in the
southern province of Malaga, the Andalusia regional government said in a
statement.

“You can imagine the pain and sadness at his command post,” Carmen Crespo, environment minister in the regional government of Andalusia, told a news conference, adding an investigation had been opened into his death.

She said the fire was “very complicated and very difficult. Dangerous, very
dangerous”.

Firefighters were backed by 29 water-dropping aircraft in their battle against the blaze during the day.

The regional government said around 1,000 people were evacuated from their
homes – mainly from the municipality of Estepona, an area popular with
British pensioners and holidaymakers.

Several told Spanish public television they were given only minutes to
leave by police.

Firefighters said strong winds, gusting up to 60 kilometres (40 miles) an
hour, hot and dry conditions and the steep mountain slopes were making their
task difficult although they hoped cooler night temperatures would help them
gain the upper hand.

Prime Minister Pedro Sánchez expressed condolences on Twitter to the family
and colleagues of the firefighter who died.

“The commitment, dedication and courage of forest firefighters is commendable,” he added. Local officials suspect the blaze may have been deliberately started.

“It is striking that at the same moment in the evening, when there were strong winds in different spots, there were different outbreaks of fire,” Estepona mayor Jose Garcia Urbano told reporters.

The fire forced the closure of the AP-7 highway, which runs along the
Mediterranean coast, for several hours on Thursday. Two other roads remain closed.