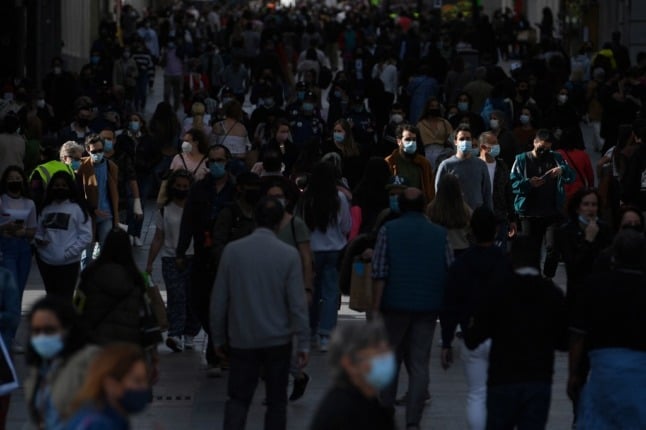 Who still hasn’t been vaccinated against Covid-19 in Spain? Photo: PIERRE-PHILIPPE MARCOU / AFP

At this point in Spain’s vaccination campaign, not having been vaccinated if you’re an adult is primarily down to personal choice rather than due to lack of availability of vaccines.

Spain is reported to have 7 million vaccines in storage waiting to be administered and the vaccination campaign is open to all groups aged 12 and over.

The country is one of the global frontrunners in vaccination against the coronavirus, announcing last Wednesday it had fully vaccinated just over 70 percent of its 47 million inhabitants.

This doesn’t include the roughly 5.3 million children aged under 12 who Spain will look to vaccinate if the European Medicines Agency approves it, allowing the Health Ministry to edge closer to vaccinating 100 percent of its population.

At the current rate, 90 percent vaccination could be achieved by October 2021.

So who’s left to vaccinate among the target population that’s currently eligible for the vaccine?

A look at the latest stats by Spain’s Health Ministry shows that the number of people who haven’t received a single dose of a Covid-19 vaccine is almost non-existent among people aged 60 and up.

For people in their fifties, 6.1 percent have not been vaccinated, a rate which grows to 13.4 among people aged 40 to 49.

Among teens, first and second doses are currently being administered by Spain’s regions. The number of 12 to 19 year olds with one dose has gone from 39 percent in mid August to 78 percent on September 3rd, indicating that most parents in Spain are in favour of their teenage children being vaccinated. That leaves adults mainly in their thirties and forties as the main group who haven’t had the vaccine yet.

According to the experts, among these there are three clearly defined profiles: so-called anti-vaxxers, those who haven’t made time to get the vaccine or aren’t sure about getting it, and people who have recovered from Covid-19 .

A survey carried out in June by the Spanish Foundation for Science and Technology (FECYT) found only 4 percent of Spaniards were totally reluctant to receiving the Covid-19 vaccine.

In October 2020 before any of the now available inoculations had been approved, Covid vaccine skepticism affected a third of Spain’s population.

“Anti-vaxxers are absolutely marginal here, a minority group, and they will not have a big impact in Spain’s vaccination campaign,” Amós García, president of the Spanish Vaccination Association, said in reaction to the study.

“I wouldn’t waste my time and effort on this group,” he added, whilst also adding in a separate interview that if attempts were made to convince them to get vaccinated, it would be important “to convey to them the scientific discourse, the only valid one, which has made it possible for society to advance and improve the level of health of citizens”.

Jaime Jesús Pérez , also from the Spanish Association of Vaccination, said that in other countries such as France or Germany vaccine skepticism is far more widespread, whereas in Spain “there are no anti-vaccine movements” despite some posts on social media.

Pérez added that not all skeptics are complete vaccine denialists, but rather that some people are “not in rush” to get vaccinated and would rather wait and see what happens in terms of the pandemic and potential vaccine side-effects.

This group also encompasses people who haven’t gone to the trouble of getting vaccinated, either due to a lack of time or apathy.

Generally speaking, the younger the person, the lower the perception of risk they are exposing themselves to and others by not getting vaccinated.

The fact that regions with older populations such as Asturias, Extremadura and Galicia have a higher rate of vaccination is no coincidence.

Of the almost 5 million people who have had Covid-19 in Spain, there are still many who are currently waiting to have their Covid vaccine, especially after a fifth wave of the coronavirus which sent infection rates shooting up  among young people in particular.

Spain’s Health Ministry initially advised a six-month wait for the first dose for those who have recovered from the virus, but faced with the more infectious Delta variant, Aragon, the Basque Country, Catalonia, the Canary Islands and Navarra decided to shorten this time period to two months.

There are also those who had Covid-19 more than six months ago but believe they have enough natural immunity and antibodies to fight off future infections.