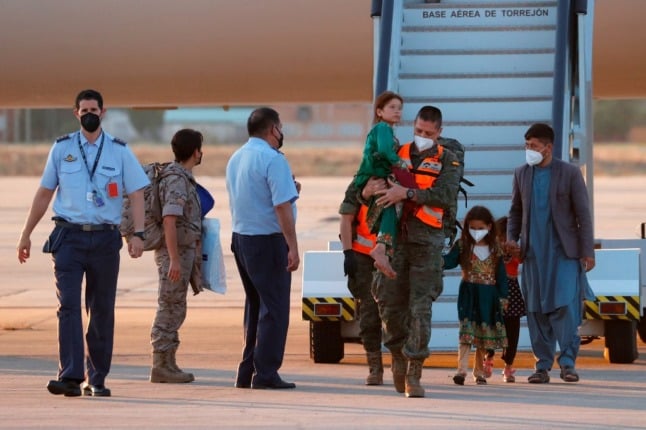 Robles said Taliban checkpoints and violence were making it difficult for people to reach Kabul airport to catch one of the daily flights on a Spanish military plane out of the country.

“We will evacuate as many people as possible but there are people who will stay behind for reasons that do not depend on us, but on the situation there,” Robles said during an interview with news radio Cadena Ser.

“It is a very frustrating situation for everyone, because even those who reach Kabul, access to the airport is very complicated,” she added.

“The Taliban are becoming more aggressive, there is gunfire, violence is more obvious,” she said.

“The situation is frankly dramatic and besides with each passing day it is worse because people are conscious that time is running out.” Spain has been evacuating its nationals and local contractors from Afghanistan via Dubai since the Taliban swept to power ten days ago.

Madrid has so far evacuated just over 700 people from Afghanistan but Robles said there were still “many people” who feared Taliban reprisal who needed to leave.

“We will keep trying until the end,” she added.

The Spanish government has consistently declined to give a figure for the total number of people it planned to take out of Afghanistan.

US President Joe Biden has set an August 31 deadline to finish the chaotic airlift organised by thousands of temporarily deployed US and UK troops, but has left the door open to an extension if needed.

However, a spokesman for the Taliban warned Monday the hardline Islamist group would not agree to any extension.

Asked if Biden should extend the deadline for US troops to leave Kabul, Robles declined to comment, saying only that she was focused on Spain’s evacuation operation.

But during an interview with private television La Sexta on Monday, she said Spain could only carry out its evacuation flights as long as Kabul airport is “controlled” by US troops. A child waves an Afghan flag during a demonstration called by “Ca la Dona” feminist association in support of Afghan women and girls, in Barcelona on August 18th. Photo: Lluis Gené/AFP

Another 420 people are expected to arrive in Spain on Tuesday, the minister said.

They include 290 people who are already in Dubai and 130 who are expected to leave on a Spanish military plane from Kabul, she added.

In addition, Spain has agreed to host up to 4,000 Afghans who will be airlifted by the United States to air bases in Rota and Moron de la Frontera in southern Spain.

Under an agreement signed by Madrid and Washington, the evacuees may stay at the airbases which are used jointly by the United States and Spain for up to 15 days.