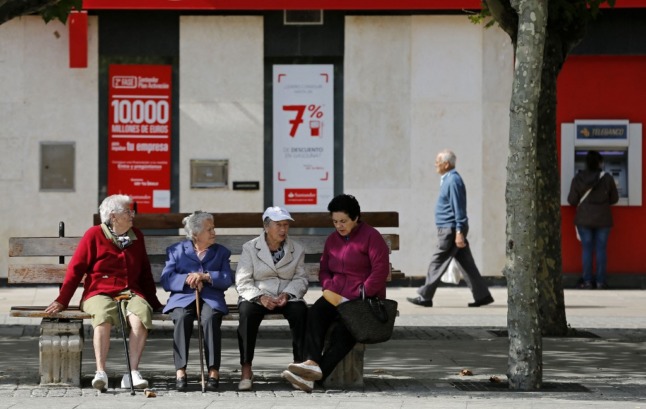 Over the past year, all of Spain’s biggest banks have closed hundreds of branches, laying off thousands of staff in the process.

This decision has hit residents in rural areas of the country particularly hard, who now find it increasingly difficult to access their savings in cash.

In fact, The Bank of Spain warned that almost three percent of the Spanish population, around 1.3 million people, find it difficult to get their hands on legal tender.

This rings particularly true in rural areas in the Spanish regions of Castilla y León, Galicia, Aragón and Andalusia, where people, especially the older population, are finding it difficult to access their pensions and deal with online banking systems.

This problem, among others, is pushing people out of rural areas in Spain, making the depopulation in these areas even worse.

In Galicia, the announcement of new office closures has led to a wave of protests across the most affected municipalities. Abanca has recently closed several of its offices in the region, affecting some 10,000 residents.

These disgruntled account holders will now join the 50,000 other Galicians from 45 different municipalities that, according to the Galician Institute of Statistics, did not have branches or ATMs in their municipalities at the beginning of the year. The majority of these are located in and around Ourense and A Coruña.

Abanca’s decision to close its branches is “unprecedented aggression against rural areas” which also targets the elderly, Carlos Costa, mayor of the Pontevedra town of Campo Lameiro argues.

Abanca justified their closures by saying that they are reorganising and that they plan to have “larger offices with more staff and a greater degree of specialisation”.

In 2008, before the merger of the savings banks, Galicia had 2,534 branches. Now there are only half left. President of the Galicia region Alberto Núñez Feijóo blames the central government for not passing a law that prevents these closures. It’s in the region of Castilla y León however where the rural communities are most affected by the shortage of banks and ATMs. Here, protests by residents and city councils against depopulation and closures are increasingly common. Zamora and Ávila are the two provinces that have the fewest banks.

Large banks continue to close branches in Extremadura as well. The Bank of Spain’s report for the first quarter of the year stated that four BBVA branches and seven Santander branches have disappeared since the beginning of the year.

Unicaja, which has just completed the absorption of Liberbank, has closed an office in the Extremaduran province of Cáceres. This equates to twelve bank branches closures in just three months.

Teruel Existe, a political group based in the province of Teruel in Aragón, has also been fighting the closures of financial offices in their province and has demanded a greater presence of branches in underpopulated areas.

In April 2021 two of Spain’s biggest banks announced thousands of layoffs. 8,300 jobs were axed at CaixaBank and 3,800 at its smaller rival BBVA, accounting for 16 percent of the workforce.

In early 2021, the Salamanca Provincial Council created a system that incorporated ATMs into the library buses.

Valladolid has also invested in five public ATMs that will be installed in centres where they had been withdrawn years ago.

Banco Santander came up with its own potential solution when it sealed an agreement with Correos so that its customers can use the 4,675 post office service points from the first quarter of this year for free if the financial institution does not have a physical presence in the municipality.

The Bank of Spain has also proposed that money could be withdrawn from lottery booths or tobacco shops. The practice of asking for’ cash back’ in supermarkets and other convenience stores in the UK and Ireland has been commonplace for years.

This practice was put into operation in 2016 by the ING bank in Spain when it signed agreements with Dia supermarkets and the Galp and Shell gas stations so that through its Twyp Cash app, you can withdraw between €20 and €150 in about 3,500 establishments.