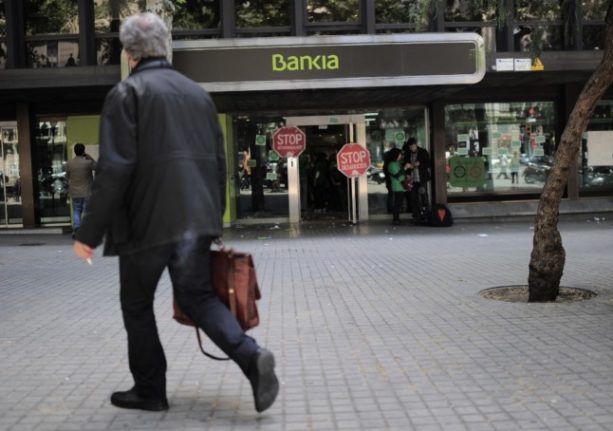 Is it worth reporting your bank for misconduct? Photo: Josep LAGO / AFP

Foreign resident forums and Facebook groups are filled with complaints about Spanish banks adding on additional charges, signing customers up for services they didn’t agree to, and changing conditions without telling them.

But foreigners in Spain are not alone, according to national Bank of Spain figures, more than 220,000 consumers have reported their banks for misconduct in the last decade.

So is it worth reporting your bank for misconduct and can you really win a claim against them?

Yes. Spain’s financial institutions end up accepting two-thirds of claims at the request of their own customers or following reports from the Bank of Spain, which has resulted in the return of more than €21 million to thousands of consumers over the past 10 years.

What are people claiming for?

Complaints range from restructuring and mortgage abuse to additional commissions. In most cases, these complaints involved small amounts of money whose annual average ranged between €84 and €455.

In addition to the high volume of small claims that have been accumulating in the last decade, there have also been much bigger ones such as mortgage fraud. Several companies have already admitted that they subjected more than half a million families to abusive practices worth €3 billion and were reprimanded by the EU Court of Justice.

In fact, mortgage practices in Spain account for the highest percentage of complaints over the years.

“Mortgages continue to occupy the first position, but they are decreasing – a reflection of how mortgage fraud is being cleaned up,” sources from Spain’s Association of Financial Users (Asufìn) say.

They also explained that the number of banking claims overall increased by almost 50 percent in the first year of the pandemic, which saw the highest volume of returns of the decade, over €3 million.

Complaints about credit and debit cards have also been increasing over the past year and half, a spokesperson for Asufìn confirmed.

So, it is worth lodging a complaint with your bank?

Seven out of ten clients who complained to the Bank of Spain got their bank to rectify the situation.

Spain’s top consumer watchdog OCU says that it’s always worth trying to make a claim in general and that 77 percent of those reported are successful.

The truth is that the resolutions of these claims not binding, so no matter what you agree, the bank does not have to pay attention to it. In addition to this, HelpMyCash.com says that the process of trying to claim against your bank is slow and that submitting a claim to the Bank of Spain is, for many consumers, the last hope that their complaints against the financial system will be heard.

However, the statistics say that reporting your bank is worth it. Of the 5,632 claims resolved by the Bank of Spain in 2018 (there are still claims to be addressed), 68 percent were resolved in favour of the claimant. And of those, the banks agreed with the customer 74 percent of the time.

How do you go about making a claim against your bank?

First, you need to go to your bank’s customer service team or customer ombudsman. By law, they must reply to you within 15 days in the case of complaints about payment services, and between one or two months for other complaints.

After this period, if the customer service team does not get back to you or the response is unsatisfactory or unhelpful, you can submit a letter by post or e-mail to the Bank of Spain, attaching all the appropriate documentation. This must include a supporting document that proves that you have already lodged a claim with your bank.

After this, you simply have to wait for an answer. Remember though, it can take up to four months for your case to be looked at and for you to receive a response.

Tips to help win your claim

Firstly, it’s important to speak with your bank directly in person, before you lodge a formal complaint. See if you can reason with the bank manager to sort out the issue amicably, as the problem in question could have been a mistake rather than intentional.

You could also try complaining on social media platforms. Often a company won’t respond if you’re messaging them privately, but if you’re telling all their other customers or potential customers about their misconduct, it discredits them on a public forum and they might be more willing to offer a quick solution.

You must also make sure you follow the correct logical order when lodging a complaint, ensuring that you complain to your bank first before you take it any further. If you do not agree with their response, only then will you be able to go to the Bank of Spain with proof of your communication with your bank and their unsatisfactory response.

Make sure to always write down complaint reference numbers and the names of the people you spoke to.

When you contact your bank’s Servicio de Atención al Cliente (Customer Service), ask to speak to someone in English if you feel more comfortable explaining the situation than in Spanish.

If your problem is related to insurance, an investment product or the protection of your personal data, you should contact the General Directorate of Insurance, the National Securities Market Commission or the Protection Agency for data, respectively instead of the Bank of Spain.