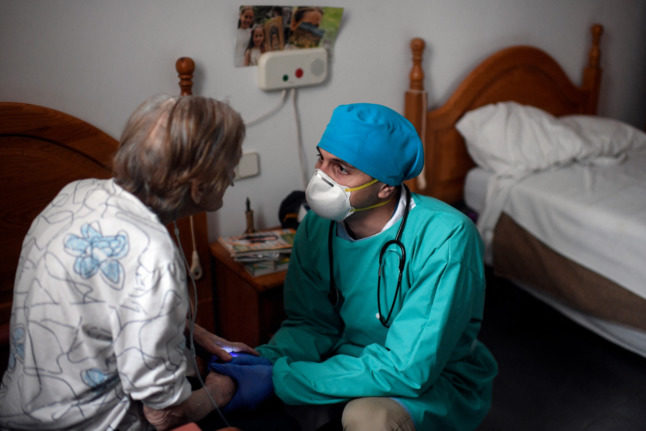 Despite the fact that the vaccination campaign for Spain’s elderly population has been virtually complete since the spring of 2021, Covid-19 infections are spreading rapidly throughout care homes this summer, so much so that cases have multiplied by eight in the last two weeks.

As of August 5th, care homes across the country had over 1,000 active Covid cases, according to Spain’s Institute for the Elderly and Social Services (Imserso), and octogenarians have gone from registering around 20 fortnightly infections per 100,000 inhabitants in July to almost 300 in August.

What impact are Covid-19 vaccines having on infections in care homes in Spain?

By age groups, Spanish Health Ministry states that 100 percent of over 80s have been inoculated and among people in their seventies the vaccination rate is 98.1 percent.

In recent weeks there has been a rise in Covid infections and deaths among the elderly in care homes, but the figures are nowhere near what was recorded at the start of the pandemic and before Spain’s vaccination campaign began with care home residents in late December 2020.

In a nursing home in the southern city of Écija, 44 of the residents have tested positive for Covid, as well six staff members, but since all of them have been vaccinated, none have presented serious symptoms.

Between July 19th and 25th there were 37 deaths in care homes from Covid-19, compared with 606 Covid deaths registered in just one week at the beginning of February, figures from Spain’s Institute for the Elderly and Social Services show.

ICUs have once again reached high occupancy, however the majority have these hospitalisations have been among the unvaccinated or those who have only received their first dose.

In the last week, on average, 614 people over 80 have tested positive, of which 114 have been admitted to hospital – around 18.5 percent. This is a significant drop compared with the peak of the third wave in January when 708 were admitted to hospital and there were 304 deaths.

“Now we discharge them a little earlier, they do not enter so badly and there is not so much mortality,” coordinator of the group of infectious diseases of the Spanish Society of Internal Medicine (SEMI), José Manuel Ramos told El Diario.

Overall, thanks to Spain’s advanced vaccine campaign, this fifth wave is playing out very differently to the previous ones, meaning that hospitalisations and deaths at care homes are still much lower than they were during the first couple of waves. Are vaccines having an effect in this fifth wave? Photo: MIGUEL RIOPA / AFP

Despite the encouraging news, experts warn that the risks remain and that the vaccines are not infallible. “The elderly do not have an immune system as robust as the young and, in addition, each positive case means isolation, periods that take their toll, especially for those with cognitive impairment,” they told El País.

“We are concerned about the increase in cases, [care homes] were the most affected institutions at the beginning of the crisis and we will adopt the necessary measures so that these centers are safe,” said Spanish Minister of Health Carolina Darias on Wednesday.

Because of the rise in cases in care homes, the government has announced new rules for these institutions, which come into force on Thursday. Residents will still be able to receive three one-hour weekly visits, from a maximum of two family members, but it is recommended that those who have not had their full vaccination schedule yet, do not attend.

All visitors must also respect safety distances and wear a mask at all times. Meetings outside are also recommended. In addition, those who have had contact with anyone who has tested positive will not be allowed on the premises, even if they have been vaccinated, and all visitors will be registered upon arrival.

Despite these extra measures, many care home workers are calling on the government to enforce more rules to avoid the situation spiraling out of control again. Many are suggesting that it be mandatory for all care home workers to be vaccinated and that Covid passports should be used for relatives of care home residents.

Many workers in the sector are also demanding that the elderly be given a third dose of the Covid-19 vaccine already.

Will the elderly receive a third Covid-19 vaccine dose?

A study by IrsiCaixa and the Northern Metropolitan Primary Care of the Institut Català de la Salut (ICS) showed that the elderly who have been vaccinated, but who have not had the virus had very low levels of protective antibodies three months after receiving the vaccine course, while those who had recovered from the virus still had the antibodies for a long time afterward.

The Minister of Health, Carolina Darias, acknowledged just a few weeks ago that a third dose might be necessary, however pharmaceutical companies Pfizer-BioNTech, Moderna and AstraZeneca have only just started to carry out studies to evaluate the effects of a booster dose.

Preliminary data shows it would be a good idea, but organisations, governments and experts agree that it is still too early to talk about a third dose, because of the uncertainty that surrounds it.

The World Health Organisation has also warned about giving third doses because of the increase in inequalities of vaccinated people around the world. They said that the global distribution of doses needs to be balanced, in order to avoid the emergence of more variants.