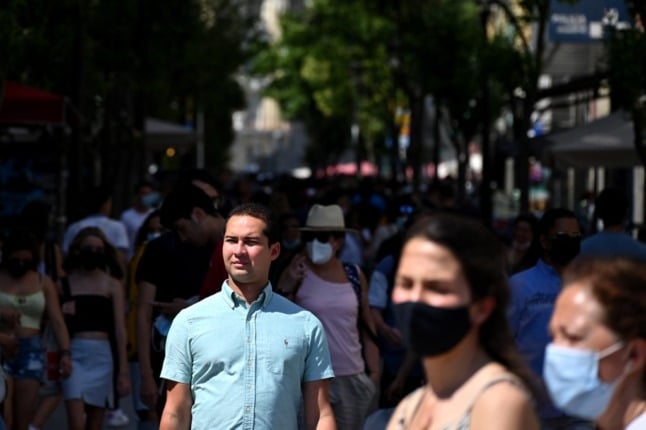 In this file photo taken on June 26th, 2021 people walk with and without face masks in Madrid. The mask may no longer be compulsory in the street, but Spaniards are clinging to it and some regions want to impose it again outdoors in the face of a new wave of infections. Gabriel BOUYS / AFP

Unlike people in many other European countries who have dropped their masks, Spaniards have largely opted to hang onto the face coverings that have become part of the daily lives of billions of people over the past 18 months.

“Just in case,” says Katherin Castro, an 18-year-old who has already had one dose of the vaccine.

“Covid’s still around and even with the vaccine, there are a lot of infections.”

Walking down one of Madrid’s wide avenues, Juana Delgado, 65, has her face covered with a surgical-grade FFP2 mask which she wears every day.

“I’m in a risk category so I wouldn’t think of dropping it at the moment although I was fully vaccinated two months ago,” she said.

Despite being fully vaccinated two months ago, she says she only feels safe “at home”.

Nearly a month after Spain dropped its requirement for people to wear masks in the street, few here have done so unlike in the UK where face coverings were discarded this week, as France mulls a similar move for vaccinated people in some indoor locations.

READ ALSO: Spain drops masks outdoors but most faces stay covered
READ ALSO: EXPLAINED: Where and when do you still have to wear a face mask outdoors in Spain?

“In the coming days, our streets and our faces will regain their normal appearance,” said Spanish Prime Minister Pedro Sanchez ahead of the lifting of the requirement on June 26th — as long as a safety distance of 1.5 metres can be observed.

But with new cases of the highly contagious Delta variant spreading rapidly, Delfin Rapado believes that “until 80 or 85 percent of the population is vaccinated, we shouldn’t be taking them off”.

So far, just over 50 percent of Spain’s 47 million people have been fully vaccinated.

Rapado, who is pushing his granddaughter in a buggy and keeps his distance while speaking, says “the government was wrong to drop mask-wearing so soon”, dismissing it as a ploy to bring back tourists.

And tourists “don’t wear masks”, complains Flor Cardeña, 64, who has a shop in Barcelona’s Las Ramblas, grumbling as two bare-faced visitors walk past.

“I don’t feel safe. I’m not going to take off my mask even when the pandemic ends,” she says.

For Marie-Hélène Leheley, a 57-year-old French tourist visiting Barcelona, it’s a surprise to see so many people “wearing masks all the time”.

The Smile Decree
In areas where virus cases have shot up such as the northern Basque Country, the Balearic Islands, Catalonia in the northeast or Andalusia in the south, regional leaders have urged the central government to reimpose the outdoor mask rule — but their pleas have fallen on deaf ears.

Despite defending its decision to drop the requirement, the government has tempered its language, with Health Minister Carolina Darias saying Tuesday that masks were “still compulsory” in Spain except “in very specific cases”.

On Wednesday, when parliament passed the so-called “Smiles Law” which formally ended mandatory mask-wearing at all times, some of the government’s key allies abstained and the right-wing voted against.

Oscar Zurriaga, deputy head of the Spanish Epidemiology Society, believes mask-wearing in the open air should never have been made compulsory.

“In well-ventilated outdoor areas where there aren’t big groups of people and where the safe distance can be maintained, it’s never been necessary,” he said.

But he said “the subliminal message” sent through dropping the use of masks is significant in that it causes people to drop other health precautious such as keeping a safe distance. 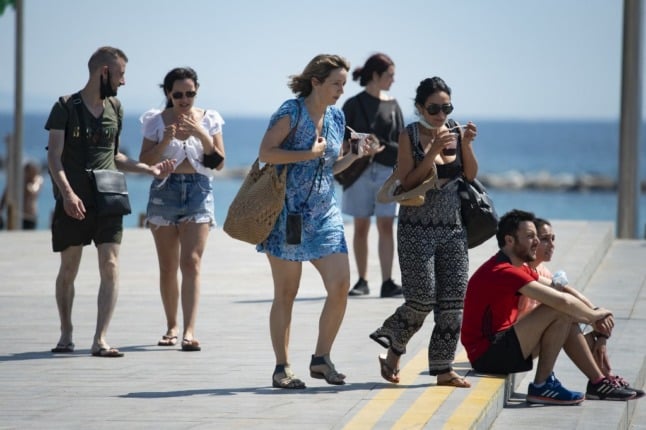 COVID-19
‘Explosive transmission’: What you need to know about Spain’s fifth Covid wave

TRAVEL
‘Germans are coming back’: Spaniards sceptical over return of tourists

COVID-19
‘Explosive transmission’: What you need to know about Spain’s fifth Covid wave