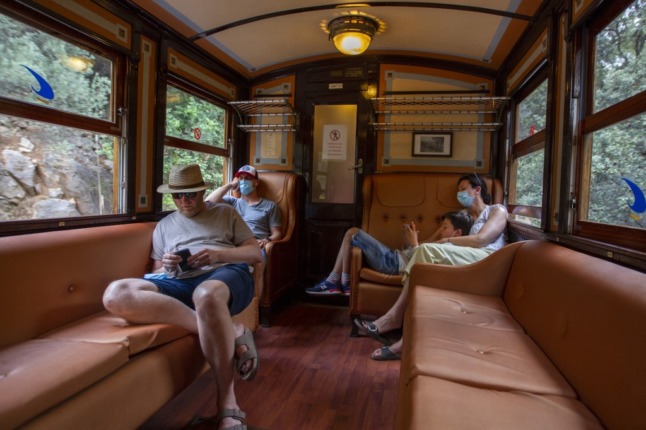 Passengers rest as they ride Palma-Soller train in the Spanish Balearic Island of Mallorca on July 14th, 2021. Photo: Jaime Reina/AFP

The Exceltur tourism association said this week that it had seen a sudden slowdown in reservations after the French and German governments urged their citizens to avoid Spain, which has seen a recent surge in infections.

“Bookings were going well but have slowed down, especially from France,” Jorge Marichal, head of the Spanish Confederation of Hotels and Tourist Accommodation (CEHAT), told Spain’s RTVE public broadcaster.

“The situation changes very quickly and within hours. The whole summer will be the same — a roller-coaster ride in which we will have to make decisions as we go along.”

The season started on a positive note: bookings at seaside hotels — which in April and May were 80 percent lower than in 2019 — improved in June, meaning the figure was only 60 percent below the same period two years ago, Exceltur said.

At the start of July, the government restated its aim of drawing 45 million visitors this year, around half the number in 2019.

But the situation has deteriorated rapidly following a mass outbreak among students celebrating in the Balearic Islands that quickly spread across the country.

On July 8, France warned its nationals against travelling to Spain or Portugal on holiday because of a spike in Covid-19 cases caused by the highly-contagious Delta variant.

The move sparked outrage across the Pyrenees although France’s top diplomat later modified the warning, saying only that vaccination was a must before travelling to Spain.

Germany also declared all of Spain to be a risk area last week, including its two popular archipelagos — the Canary Islands in the Atlantic and the Balearic Isles in the Mediterranean.

The Balearic Islands were downgraded by Britain as well this week to its “amber” travel list, removing them from the green list where they had been placed in late June.

The move means that from Monday, any non-vaccinated British travellers will have to quarantine for 10 days after returning from the islands. “Any announcement from the authorities in our main visitor markets has an immediate impact,” Maria Frontera, head of the Balearic Islands’ hotel federation, told Cadena Cope radio.

Before the pandemic, the islands’ largest visitor groups were British, French and German nationals.

But even though new bookings have slowed, few travellers had cancelled their bookings outright, she said.

“For now, we’re getting more reservations than cancellations.”

The same scenario is playing out on the Costa Brava in northeastern Spain where the French account for nearly half of all foreign tourists.

While the warnings have slowed reservations, “bookings are still coming in,” said Judit Lloberol, head of the Costa Brava’s hotel association.

“There have been some cancellations but it’s not been too dramatic.”

Visitors were being very cautious, she said, largely booking “at the last minute” with hotel occupancy rates not exceeding 65-70 percent on weekdays, at a time of year when they would normally be “overbooked”.

But on the southern Costa del Sol, a hotspot for British holidaymakers, bookings have surged in recent days after London lifted quarantine requirements for all vaccinated returning travellers, said Javier Hernandez of the region’s hotel association.

He said hotel occupancy rates were expected to average around 60 percent in July and August, barring any last-minute surprises.

Economic devastation caused by the pandemic nonetheless remains visible with nearly one in four hotels on the Costa del Sol not opening at all, and close to one in five in the Balearic Islands, industry figures show.