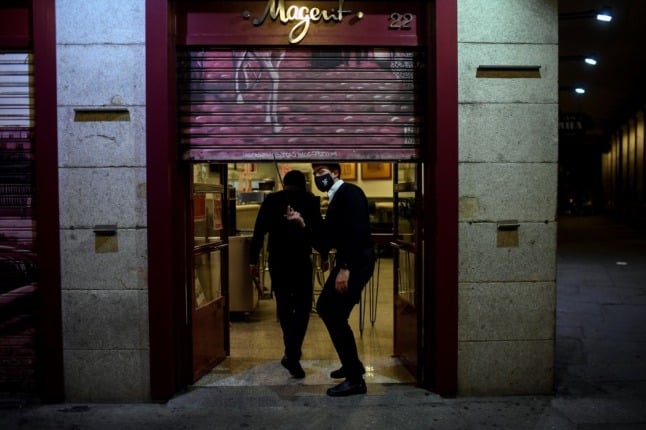 Employees prepare to shut their bar for the night in Madrid. Photo: OSCAR DEL POZO / AFP

The northeastern region of Catalonia is expected to later on Wednesday ask the courts for permission to impose a nightly curfew in its hardest-hit cities, including Barcelona.

It is following in the footsteps of the neighbouring region of Valencia which has already received the green light to restore a curfew in 32 towns.

The northern region of Cantabria is also working to impose a curfew.

Catalonia, the epicentre of Spain’s jump in infections, has already in recent days ordered public activities to finish at half past midnight, and restricted gatherings to no more than 10 people.

The spike in cases in the region followed the reopening of nightclubs on June 21st and the end of the school year.

The coronavirus infection rate for people aged 20- 29 in Catalonia has jumped to 3,311 cases per 100,000 people, compared to a national average of 437 cases among people of all ages.

READ MORE: Why does Catalonia have the highest Covid-19 infection rate in Spain and the EU?

Nearly 80,000 new infections have been diagnosed in Catalonia, a region of some 7.7 million people, in the past two weeks.

Town halls have asked for help to restrict access to beaches and parks, the site of large gatherings since Spain lifted a nationwide curfew in early May.

“What surprised us was the speed of infections… it has gone very fast,” the deputy medical director of Barcelona’s Bellvitge Hospital, Alvaro Arcocha, told AFP.

The number of Covid-19 patients at the hospital has jumped to 110 from just 20 two weeks ago.

And their average age — 44 years — is lower than in previous waves, a trend seen across Spain. The country’s vaccination programme has worked through age groups, so people in their 20s and 30s are only now starting to get jabs, leaving them vulnerable to the new Delta variant.

Unlike in other waves of infections, deaths have remained low and hospital ICUs have so far not been overwhelmed with Covid-19 patients, possibly because patients are younger.

But Arocha said it was not yet certain if this would remain the case.

“We will see as we go because this changes from one day to the next,” he said.

Spain, one of Europe’s worst affected countries, recorded 13 deaths from Covid-19 on Tuesday, compared to hundreds of daily fatalities during its first wave last year.

The government is counting on its accelerating vaccination campaign to bring down infections.

Prime Minister Pedro Sánchez said the country was on track to have 70 percent of the population immunised against Covid-19 before the end of August, and urged young people to keep taking measures to avoid getting infected.

“We are about to reach the shore and it does not make much sense to stop rowing when we are about to arrive,” he said late Tuesday during an interview with Telecinco television.