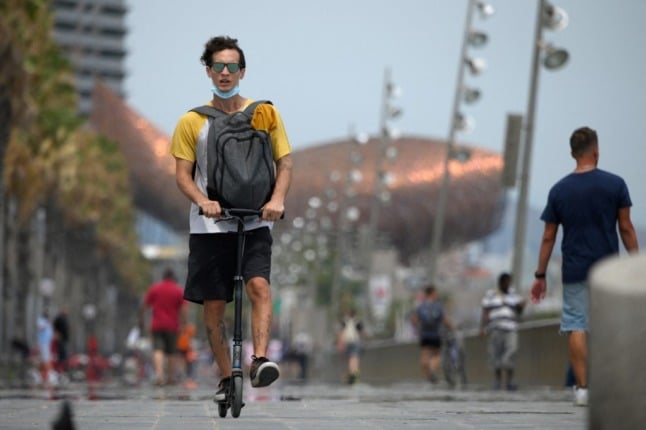 An e-scooter rider in Barcelona, where Covid cases have shot up the most in Catalonia. Photo: Lluis Gené/AFP

As the latest map by the ECDC reflects, the prevalance of the virus in Spain clashes with the relatively low incidence across the continent at the moment (Spain’s infection is higher still since the map below was published). However, there is no region anywhere else in Europe with a higher infection rate than Catalonia, where the infection rate is now a worrying 1,031 cases per 100,000 inhabitants.

That’s more than double the national average and three times or more that of 11 other autonomous communities.

Even though Covid cases have spiked across much of the territory, Catalonia’s infection rate is effectively pushing Spain’s national infection rate up.

“We are on a vertical curve,” Clara Prats, a researcher at Catalonia’s Bioscom research centre, told Spanish daily El Independiente about the upward trajectory of cases and how it’s quickly snowballing.

The following map by Bioscom shows just how prevalent high infection rates are across the region (click here for interactive version), not just in the capital Barcelona. Why is Catalonia’s infection rate so high?

Spain’s fifth wave is believed to have started as a result of San Juan celebrations on June 23rd, when the country’s infection rate stood at around 92 cases per 100,000.

By that stage, the country’s state of alarm had been over for more than a month, resulting in a general easing of Covid restrictions which in cities such as Barcelona and Madrid was celebrated by thousands of people in packed squares as if it meant the pandemic had ended.

This sense of “false security”, as described by leading epidemiologist and former WHO directive Daniel Lopez Acuña, has prevailed among young people from May into June as their school years ended and the summer weather pushed them to spend time in the streets.

In a city like Barcelona, which has a large young cosmopolitan population and attracts thousands of international tourists looking to party, footage of squares and beaches packed with maskless revellers have become commonplace every weekend.

The Spanish government’s decision to lift the outdoor mask rule on June 26th together with the reopening of the city’s nightlife establishments (now closed again) have both contributed to making the incidence of the virus among young people go off the charts: more than 2,000 cases per 100,000 20 to 29 year olds.

But it’s the consolidation of the more transmissible Delta variant as the dominant strain in Catalonia together with the fact that it’s mainly unvaccinated young people in Catalonia who are getting infected that have ensured that Covid cases have multiplied by more than ten in just two weeks in the region of 7.6 million people.

Moreover, the decision to suspend Covid tests for asymptomatic cases has been criticised as an apparent lack of interest by health authorities to trace infections and ensure young people who have Covid-19 quarantine for ten days. This responsibility has since been relayed to Catalonia’s pharmacies.

“If you asked me if we’d lift restrictions when we did again, the answer is no,” Catalan Health Councillor Jose María Argimon told Catalonia’s TV3 when asked if the regional government had lifted Covid restrictions too soon.

All these factors have added up and turned into a perfect storm that’s made Catalonia the region with the highest Covid infection rate in the whole of the EU.

Now it remains to be seen whether the Catalan government’s closure of nightclubs, extra police presence at night to break up street drinking, limits on social gatherings/busines hours and the possible return of the curfew will slow the region’s vertical curve.

Considering that Barcelona’s R number is 3,1 at present (meaning 100 infected people infect another 310) and that only around 14 percent of 20 to 39 year olds have received at least one dose in the region, infections look set to continue rising in Catalonia.