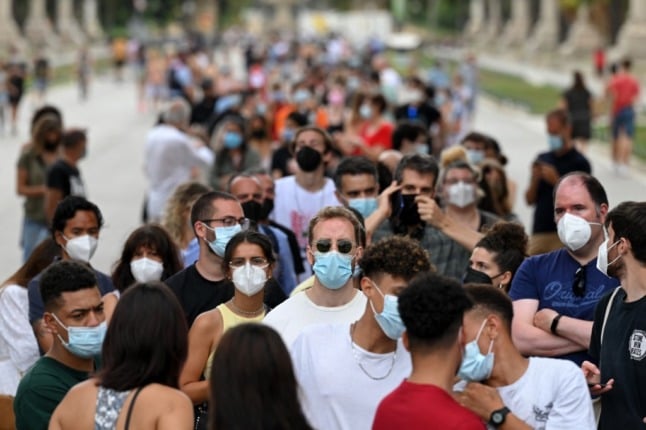 As the coronavirus swept across Europe last year, Spain was among the worst affected countries in the region: soaring death rates, hospitals overrun, and millions confined to their homes as a national lockdown took hold.

A year on, Covid deaths are down but the country is again struggling with another wave of the coronavirus, the fifth so far.

Healthcare workers are now racing to inoculate people in their 20s, even if those contracting coronavirus are not showing strong symptoms.

Failing to get cases under control could allow the pandemic to spin out of control among the general population — especially as new, highly-transmissible versions like the Delta variant take hold on the continent.

The latest data from Spain’s Health Ministry suggests that the Covid strain that originated in India is now the dominant variant in at least Catalonia, Madrid, the Valencia region and Navarre.

“They contribute to community spread if they are not stopped in time,” doctor Fernando Garcia, spokesman for Madrid’s public health association, told AFP.

To date, Spain’s vaccine campaign has largely focused on the elderly and the vulnerable — around 64 percent of people in Spain have received at least one vaccine dose.

But that rate drops to just 14.4 percent among those in their 20s.

And case rates are rising among them thanks to the easing of restrictions — masks are no longer required outdoors, for example — and the onset of the busy summer holiday season.

That’s more than triple the average for all ages, and a rise of nearly 100 from the previous day.

Spain’s fifth Covid wave: What are the new restrictions in each region in July?

Happily, deaths have remained low as the vaccines have taken hold, with 17 fatalities reported Wednesday, and occupancy rates in intensive care units are not rising.

But the government says getting young people vaccinated is a crucial piece of the puzzle.

Some regions where infections among the young are rising at the fastest rate, including Madrid and Catalonia, have now opened vaccines up to younger groups, eager to tamp down rising rates. Prime Minister Pedro Sánchez said Spain is now vaccinating people at one of the fastest rates in Europe and is on track to have 70 percent of the population immunised against Covid-10 before the end of summer.

“The segment of the population which has not been able to get vaccinated is where the virus is spreading, that’s to say, among younger people,” he said Thursday.

He has vowed to make five million rapid tests available to regional governments to detect outbreaks, and said he would make military personnel available to help with contact tracing.

In some parts of the country, familiar restrictions are being rolled out again.

In Catalonia, nightclubs will close from Friday — just weeks after they were reopened — in a bid to curb an alarming rise in infections among young people.

Other regions are also limiting nightlife or have asked the central government to reinstate a nighttime curfew, a move Health Minister Carolina Daria said is “not on the table”.

She urged young people to limit their social interactions, warning they could spread the virus to older people who have been vaccinated but not yet developed immunity.

But she made it clear she did not want the youth to feel punished.

“It’s very important to ask them to act responsibly but not to hold them responsible,” she said.

“We know there is fatigue, but the virus is still there… We must protect the age groups where there is greater transmission.”