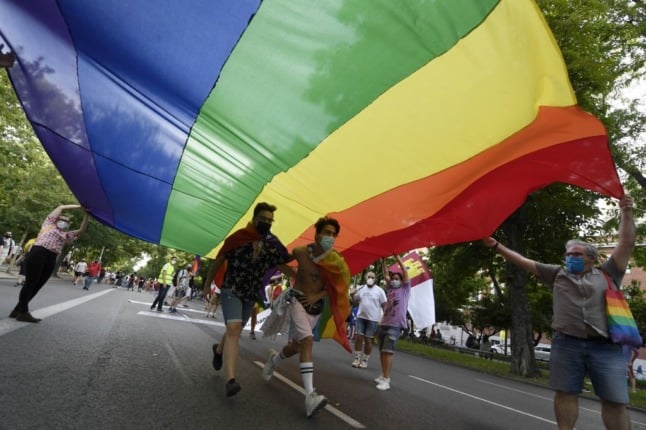 Spain has undoubtedly come a long way from the days of Franco’s dictatorship, when homosexuality was classified as “a danger”.

At the time, gay men were sent to so-called galerías de invertidos (prisons for ‘inverts’).

Spain’s most celebrated poet Federico García Lorca was shot dead by nationalist forces in 1936 because of this sexuality.

Once Spain became a democratic country, same-sex sexual intercourse was legalised in 1979 and gay marriage and adoption were legalised in 2005, the third country in the world to do so.

In a 2017 interview in El País, Podemos founder Luis Alegre said Spain was “the most tolerant country in the world when it comes to homosexuality”.

In the same year, the United Nations High Commissioner for Refugees reported a large increase in the number of asylum applications for Spain from LGBTIQ+ people escaping persecution, a legal option made available to refugees by the Spanish government in 2009.

According to a 2019 study into the global acceptance of homosexuality by the US’s Pew Research Centre, Spain was the third most gay-friendly country in the world after Sweden and the Netherlands. Two years earlier, it was top of the ranking.

From a legal standpoint, we could continue to name progressive bills that further cement Spain’s image as a tolerant country when it comes to LGBTI people, the latest being the Spanish government’s decision to allow anyone aged 16 or older to easily change their gender on their ID documents.

But is this lack of prejudice in Spanish society real or just visible on paper?

In 2021, the homophobic murder of a young man over Gay Pride weekend shocked a country regarded internationally as one of the most tolerant when it comes to LGBTIQ+ (Lesbian, Gay, Bisexual, Trans, Intersex and Queer) rights.

It prompted a wave of protests across Spain just as low-key Pride celebrations (as a result of Covid-19 restrictions) had wrapped up across a number of cities.

The timing of this heinous crime brought to light a worrying trend which according to Spanish Interior Ministry stats has been on the up recently: hate crimes against the LBGTIQ+ community.

Generally speaking, hate crimes due to sexual orientation or gender identity have risen in Spain in recent years.

However, according to Catalonia’s Observatory against Homophobia, in 2022 LGBTI hate crimes have skyrocketed again by 70 percent in 2022 across Spain. 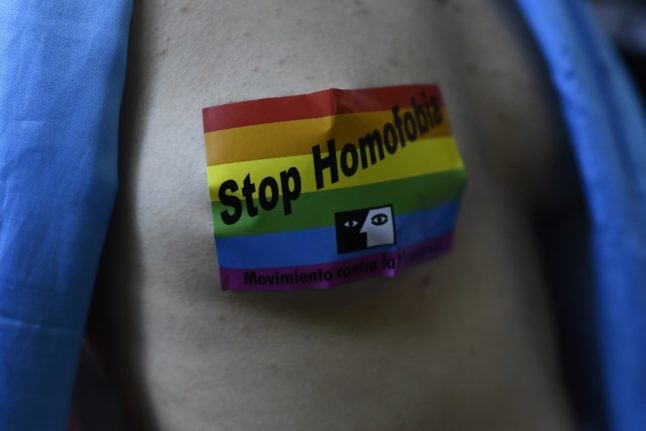 A member of the Lesbian, Gay, Bisexual, Transgender, Intersex and Queer (LGBTIQ) community wears a sticker on his chest reading “Stop Homophobia” during the annual Pride parade in Madrid, on July 6, 2019. (Photo by OSCAR DEL POZO / AFP)

There are dozens of stories of homophobic attacks and insults from all across Spain, and although social media helps to bring attention to these crimes, many remain unreported.

Politically speaking, there is one big change according to the experts.

“In Spain, people with a favourable opinion of the Vox party, which recently has begun to openly oppose some gay rights, are much less likely to say that homosexuality is acceptable than those who do not support the party,” the PEW Research Centre’s last report highlighted.

According to Barcelona City Councilor for Citizen Rights Marc Serra there’s a “certain normalisation of the intolerance rhetoric towards the LGBTIQ+ collective in the media and institutions due to the appearance of the far right”, something that is happening throughout Europe”.

LGBTIphobia observatories have found that most of the attackers are males aged under 30.

Even though the Spanish government continues to take steps towards more equality for different LGBTIQ+ collectives – most recently with its ‘Trans Law’ – these increasingly common hate crimes are tarnishing Spain’s image as a tolerant country.

However, Spanish society remains firmly against LGBTIQphobia, with 89 percent accepting homosexuality according to the Pew Research Centre and Spain being crowned world leader for transgender rights in a 2018 Ipsos study.

According to 2021 Ipsos data, Spain is also the third country in the world and the first in Europe with the highest number of people who don’t consider themselves heterosexual (78 percent consider themselves straight, 12 percent they have another sexual orientation, 10 percent would rather not comment).

Six out every ten Spaniards say they have a relationship/friendship with people from the LGBTIQ+ collective, one in every five have attended Pride celebrations, 76 percent are in favour of gay marriage and 73 percent believe the LGBTIQ+ should be open about their sexuality (highest of all 27 countries surveyed).

It’s perhaps this increasing openness and tolerance among the majority of Spanish society, and the freedom that this brings to the LGBTIQ+ community, that is triggering the select few bigoted people in Spain to turn to violence and homophobia.

From detergents and air fresheners to window cleaners and floor cleaners, Spanish brands have found a unique niche in the UK.

The realisation began when a Spanish resident of the United Kingdom  – @La_exquis tweeted her surprise at discovering the British obsession with Spanish cleaning products and it went viral.

Many of the outlets selling the brands said that UK customers loved the scents of the Spanish cleaning brands and one even claimed that it “transports you back to a sunny villa in Spain”.

Brands such as Nenuco, Asevi and 3 Brujas were found to be some of the best-loved products in the UK, but the craze didn’t just stretch to cleaning labels. Many body care companies such as Heno de Pravia and Don Algodón had also found a fan base among the Brits.

A quick search on Google comes up with a multitude of British pages dedicated to the sale of Spanish fabric softeners, floor cleaners, window cleaners and air fresheners, such as The Little Spanish Cleaning Company and Spanish Cleaning Products UK. Some products can even be found on the Amazon UK site.

But they are not only sold through web pages, Instagram is also pushing these items with many people buying directly from accounts.

“The products are obviously expensive due to Brexit” the user commented on Twitter.

In fact, when making a comparison between the prices of these items, the difference is astonishing.

Nenuco cologne, one of the most successful products in the UK, costs more than triple the price of a 600ml bottle sold in Spain.

In Spain, it costs just €2.65 while in the UK the same bottle is €11.21, but fans still seem willing to pay for a little slice of Spanish zing.

“It smells exactly like vacations in Spain when I was little,” wrote a user in one of the product reviews, summing up one of the reasons for the products’ success in Blighty.