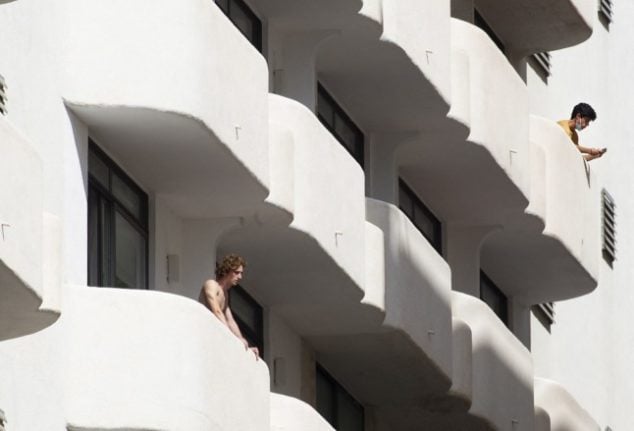 Students stand on balconies of an hotel where students who had contact with COVID-19 patients are quarantined in Palma de Mallorca on June 29, 2021. - An end-of-year student trip to Spain's Balearic Islands has sparked a major coronavirus cluster with hundreds of confirmed cases and thousands of young people in quarantine across the country. (Photo by JAIME REINA / AFP)

News media headlining the events have reported that angry parents are demanding the release of around 250 young people who have been confined to a hotel on the Mediterranean island.

It all started last week when hundreds of young people throughout Spain tested positive for Covid-19 after they returned from a week’s holiday to Majorca to celebrate the end of exams.

The authorities said they are infected with the Alpha strain first detected in the United Kingdom.

The health ministry reported Monday that at least 1,167 people have been infected and 4,796 have been forced to quarantine.

A young man from the eastern city of Valencia has been in intensive care since Monday, Spanish media reported.

Fernando Simon, the government’s chief epidemiologist, called the trips to Majorca the “ideal breeding ground to facilitate a spread with multiple origins and big events without control”.

At least 11 regions of the country have detected cases linked to the trip.

In the Madrid region alone, the authorities reported on Wednesday 778 positive cases and more than 2,886 others forced to self isolate.

Most of the young people did not respect requirements to wear masks during their stay in several hotels on the Mediterranean island, they said.

On Wednesday, 49 of the 86 people travelling from Majorca tested positive for the virus when they landed at Santiago de Compostela airport in northwest Spain, including several who had taken part in the end-of-year student trips, the regional government of Galicia said.

All the passengers on the flight were now in quarantine. Young men wave from balconies of an hotel where they are quarantined. Photo by JAIME REINA / AFP

In Palma de Majorca, several hundred young people have been confined to their hotel rooms, the regional government said.

Dubbed “Hotel Covid” the Palma Bellver is hosting at least 232 students who “have a direct or indirect link with the student trip to Majorca”, the local government said Tuesday.

A quarter of them have tested positive for Covid-19, it added.

The media is running widely with images of these young people holed up in the seafront hotel shouting “we’re negative, we want out”, or sending the same message written on their towels on their balconies.

Coming under fire are both the authorities and the young people who have not yet been vaccinated and are accused of being reckless.

Police told AFP that they have intervened several times in response to neighbours complaining of students blasting their music, throwing projectiles onto public spaces or hoisting alcohol to the balconies using sheets.

A number of parents have gone to the courts in a bid to remove their children from the quarantine.

Despite the opposition of prosecutors, on Wednesday a judge ordered that students testing negative should have their confinement lifted.

The row comes as Spain sees an improvement in its fight against Covid-19 with a broad vaccination drive.