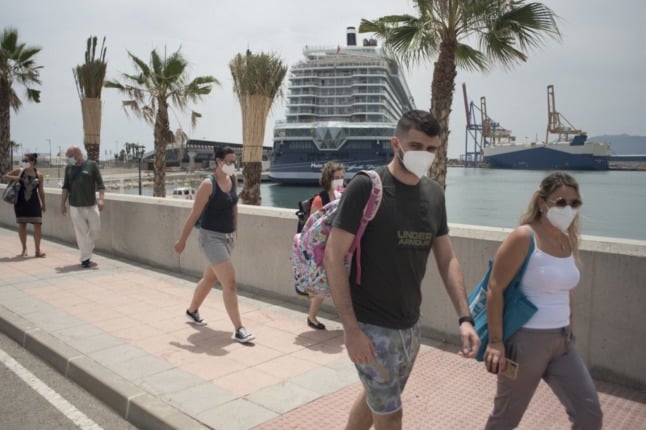 Tourists disembark from the cruise ship 'Mein Schiff 2' of the German travel giant TUI at the port in Malaga, on June 15th. Photo: Jorge Guererro/AFP

On June 7th, Spain’s transport ministry lifted a ban on international cruise ships that had been imposed at the beginning of the coronavirus pandemic in March 2020.

The ban was lifted after the virus began to ease in Europe, where most cruise passengers come from, and also owing to rising vaccination numbers.

“This is the first international cruise ship,” a spokesman for Spain’s port authorities told AFP after the Mein Schiff 2 docked in the southern resort.

“After 15 months in which our ports have stood empty, of waiting for these ships, we’re all committed to making it an unforgettable experience for the passengers,” Carlos Rubio, president of Malaga’s port authority, told RNE.

He said the visitors were being allowed off in organised groups however to ensure Covid safety regulations were adhered to.

“With these first cruises, the excursions are going to be in bubbles, meaning people won’t be able to walk around freely but I hope within in a few months, as the vaccination progresses, things can get back to normal.”

Rubio said Malaga was expecting to receive around 50 stopovers this year, describing it as “a good start”.

The vessel arrived from Gran Canaria in Spain’s Canary Islands and is to sail later Tuesday to Mallorca in the Balearic islands, the radio said.

Before the pandemic, Spain was Europe’s second-most popular destination for cruise ship stopovers.

With more than 80,000 deaths and 3.6 million infections, Spain has been badly hit by the pandemic but the number of cases has slowed significantly as its vaccination programme has gathered pace.

To read more travel news, explainers and other content on The Local Spain, check out our travel section here.