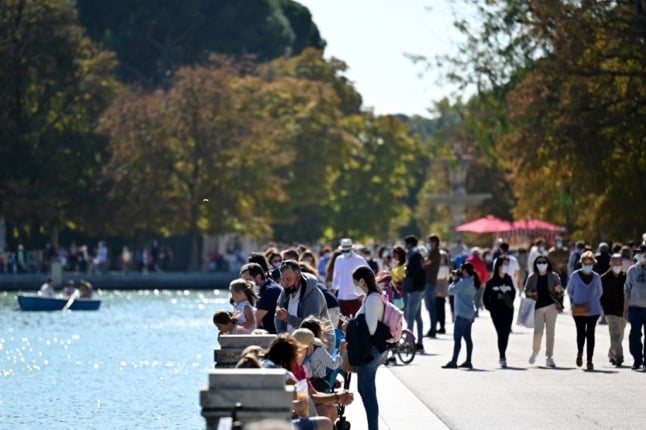 Madrid public health officials Elena Andradas and Antonio Zapatero on Friday June 11th announced that there has been “community transmission” of Delta variant B.1.617.2 in the central Spanish region, following 22 detected cases in the past 14 days, 18 over the past week.

As a result, health authorities in Madrid have brought forward the second dose of the AstraZeneca vaccine for people between the ages of 60 and 69.

According to the World Health Organisation, “community transmission” is the worse transmission scenario.

It’s used to describe a situation where a person is infected by the virus but they’ve not been overseas recently or been in contact with confirmed cases, making it near impossible to trace the sources of infection.

“What happens with the Indian variant is that it fundamentally behaves in a way that is more transmissible and we have seen a greater number of cases and admissions”, he added, forgetting to use the new Greek alphabet terminology suggested by the WHO.

“It is 50 percent more transmissible than the British variant and this spread throughout the territory already happened in the United Kingdom.”

According to the deputy public health head, young people are particularly exposed as they make up the age groups that haven’t received either one dose or the complete treatment.

“Each case is tracked and closely monitored, but we imagine that the situation may be like the one we had in December and January with the British variant,” Zapatero concluded.

On June 11th, Public Health England said Delta variant cases had jumped by 30,000 in a week, despite the UK’s advanced vaccination campaign.

In early May, Spain’s Health Ministry said the Alpha variant which originated in Kent made up 90 percent of active infections in Spain.

Throughout the month of May, more Delta cases were detected in the regions of Galicia, Extremadura, Catalonia, the Basque Country. Although Spain’s health ministry has not confirmed the official total, those reported by the media add up to around 50.

For Madrid health officials however, the confirmation of community transmission in the capital means that the variant first detected in India will be the predominant in Madrid in the next six weeks and then replace the Alpha variant as the most dominant across Spain.

Spain decided on April 27th to make all travellers arriving from India undergo a 10-day quarantine to prevent the potential spread of the B.1.617.2 variant within the Spanish territory.

Spain also decided to impose restrictions on travellers from India later than its European counterparts Germany, France, the United Kingdom, Switzerland, the Czech Republic, Italy and the Netherlands.

On June 11th, Spain’s Health Ministry extended the quarantine requirement for these travellers until at least June 26th, but the Centre for Health Alerts and Emergencies (CCAES) continues to be classify the Delta variant as “of interest” rather than “of concern”.

In late May, Zapatero accused Spain’s national government of negligence for reportedly being aware that less than 10 percent of Covid tests were being carried out on inbound travellers at the Spanish capital’s airport, as well as allowing in people who have tested positive for Covid-19.

On June 11th, Zapatero reiterated that Spain’s central government hadn’t acted responsibly in terms of border control and that 17 cases of another variant, the B.1.621 strain which was first detected in Colombia, had also been detected at Barajas airport.

Despite the threat posed by the arrival of new variants before Spain’s population is fully vaccinated, the country’s fortnightly infection rate has more than halved over the last month and currently stands at 110 cases per 100,000 people.