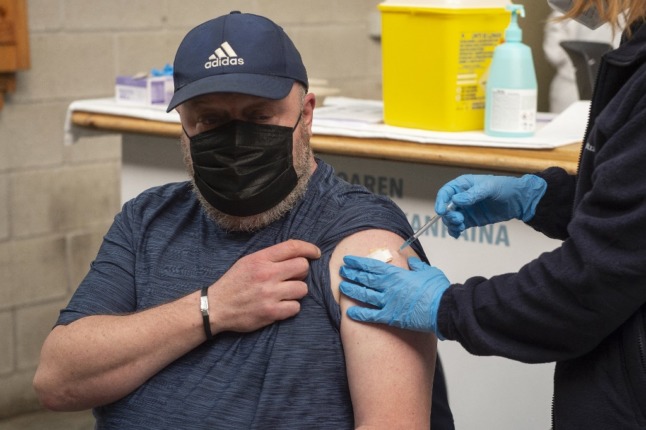 Is Spain one of the few countries in the world where tourists can get vaccinated? Photo: Ander Guillenea/AFP

June 7th 2021 marks the official relaunch of tourism in Spain.

The ban on non-essential travel from outside the EU/Schengen Area has been lifted for vaccinated travellers, cruise ships can dock at Spanish ports again, cheaper antigen tests for Schengen travellers to Spain are now allowed and the country’s ‘Covid passport’ is tentatively being launched.

In a nutshell, Spain wants tourists back, setting its target at 15 million international visitors for this summer.

Unfortunately, the timing of these eased restrictions isn’t the best, as it coincides with ongoing vaccine campaigns across Spain, the EU and the world, with a large proportion of middle adulthood groups yet to receive their first or second doses.

So for many Europeans, booking a holiday in Spain is off the cards until they’ve completed their vaccine treatment. But does it have to be? Is it possible for foreign visitors to get their second dose of the Covid-19 vaccine while on holiday in Spain?

If you’re a tourist travelling to Spain from abroad, there is nothing to indicate that you’ll be able to get your first or second dose in the country, even if you’re travelling from the EU.

Vaccines are only in the hands of the country’s public health system and not available privately. This means that only those who live in Spain and have access to the social security system (temporarily for those with private health insurance) can get the Covid-19 vaccine.

Spain has said it will vaccinate everyone in the country, including those who aren’t properly registered, but that does not mean that tourists can fly from abroad and get their inoculation in Spain, even if the second dose is due while they’re here.

However, if you are a resident in Spain who wants to travel to another part of the country on holidays this summer, but you’re not sure if you can plan anything until you’ve been vaccinated, things may soon change.

Two Spanish regions – Andalusia and Cantabria – have so far expressed interest in offering this ‘holiday vaccination service’ to national tourists whose vaccine appointment falls on a date while they are on holiday in their territories.

According to Andalusia’s regional president Juanma Moreno, “we’re studying how this could be done” but “we’re willing to vaccinate them in Andalusia”. Moreno also urged residents in his region to book their vaccination appointments whenever possible to be able to have peace of mind when booking their holidays.

“I haven’t even asked about this because it seems obvious, I think so,” Cantabrian president Miguel Angel Revilla told journalists on Monday.

“Whoever had a vaccine outside (in another region) and is here, well they can get the second one here; at the health centre close to wherever they are, they will be contacted.

“They will have to let us know what date their first dose was administered, the time frame, the vaccine.”

It is unclear yet whether either regional president was referring to offering first or second doses, or both.

August is the main summer holiday month in Spain, with many companies urging their employees to take off much of their annual holiday leave then while they shut up shop.

At the current rate of vaccination, many people in Spain in their thirties and forties will receive their second dose in August, while younger age groups could expect to receive their first dose during that month.

Despite the encouraging words from the Cantabrian and Andalusian presidents, this vaccine incentive for holidaymakers to visit and get their second dose in another region may not be adopted in other parts of Spain, as each of Spain’s 17 regions is responsible for the management of their own vaccine campaign.

For those of you who want to start planning your summer holidays, we have also compiled this explainer on how to change your vaccine appointment depending on where you are in Spain, just in case you get called up for the vaccine while you’re away from home.