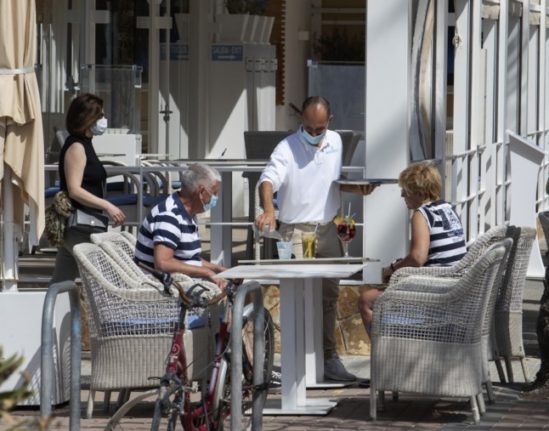 UK Ambassador to Spain Hugh Elliott on June 2nd said that it was “unlikely” that Spain would be included in the UK’s quarantine-free “green” travel list when it is updated on June 3rd or 4th by British authorities. This has since been confirmed by UK authorities.

READ MORE: The UK keeps all of Spain on its ‘amber’ travel list until late June

Elliott made the statement after meeting with Benidorm mayor Toni Pérez, who for his part, said that he didn’t expect British tourists to visit the popular Costa Blanca town “until the end of July or the beginning of August”.

The idea that Boris Johnson’s government will make an exception for the Valencia region and include it in the green list, given its persistently low Covid infection rate, has also been ruled out as “not viable”.

Numerous Spanish news sites have published stories based on the UK Ambassador’s words, with headlines such as “the ambassador delays the arrival of British tourists until the end of July”.

However, travel restrictions and advice from UK and Spanish authorities remain the same, at least on paper.

What does Spain say?

As things stand on June 3rd, the UK remains on the list of non-EU countries where citizens can travel to Spain for non-essential reasons such as holidays,

That’s been the case since May 24th – UK holidaymakers flying to Spain are not expected to provide a PCR test to enter the country and they don’t have to quarantine upon arrival.

According to The Times, in a period of five days after Spain eased travel restrictions for Brits, 60,000 UK tourists flew to Spain on 284 planes.

What does the UK say?

The UK Foreign Office “advises against all but essential travel to Spain, including the Balearic Islands but excluding the Canary Islands, based on the current assessment of COVID-19 risks”. This was last updated on May 25th and is still current on June 3rd.

That is advice, which means that UK authorities aren’t preventing Britons from flying to Spain, even though they are quite clearly advising against it.

But there is of course the ten-day quarantine and three PCR tests which British tourists are legally obliged to carry out upon their return to the UK, a requirement which looks likely to stay if Spain remains in the amber travel category as expected.

“I think it’s very important for people to grasp what an amber list country is: it is not somewhere where you should be going on holiday, let me be very clear about that,” Boris Johnson said back in May.

So unless the UK changes the rules of the game for its traffic light system, Britons will be able to go on holidays to Spain throughout June.

However, they have to keep in mind that they’re being advised against it by UK authorities, that they’ll have to quarantine and get three PCRs done when they return and that Spain’s amber classification will likely invalidate most travel insurance if their flights are cancelled or they need to go to hospital with Covid-19.

What does the EU say?

On June 2nd, ambassadors from EU member states agreed in principle that it was too early to add the UK to the list of countries from where non-essential travel, such as tourism, is allowed, due to ongoing concerns about the rise of the Delta variant of Covid, first identified in India.

Could this affect Spain’s travel restrictions for British travellers?

As mentioned earlier, Spanish authorities have not officially announced any changes – British tourists are still welcome and can come without PCRs.

It’s fair to say that the Spanish government often finds itself at a crossroads between what is best for its country – in many cases its tourism industry – and what it should do as a member of the EU.

As an example of this recurring dilemma, The Local Spain recently reported how Pedro Sánchez’s announcement that all vaccinated travellers “regardless of their country of origin” could come to Spain from June 7th contradicted the decision by Spanish authorities only a few days later to extend the ban on non-essential travel from outside the EU/Schengen Area until at least June 30th, with no exception mentioned for vaccinated travellers.

READ MORE: Has Spain backtracked on its plan to welcome all vaccinated tourists in June 2021?

There’s a sense that confusing travel advice and restrictions (intentional or not) from Spanish, British, EU and any other international authority, is one of the most dissuasive ways of preventing people from flying abroad for their holidays.