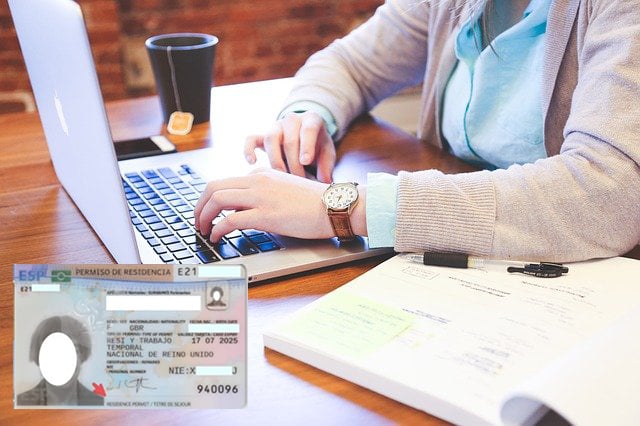 Since the new TIE cards for Britons in Spain were introduced in July 2020, Spanish authorities and the UK Embassy in Madrid have repeatedly stressed that it remains”optional” to exchange the green residency documents for these new biometric cards, as the old paper certificates are still valid under the Withdrawal Agreement, with no end date set or even implied.

So it is still up to the individual to decide whether to exchange their Certificado de Registro de Ciudadano de la Unión (aka the green residency certificate) for a Tarjeta de Identidad de Extranjero (the new TIE for Brits as non-EU nationals).

However, the fact that on May 26th UK and Spanish authorities changed their stance and are now recommending that Brits “take steps now” to exchange their green residency document for a TIE may spur some of you to consider getting the process out of the way.

The benefits according to UK Ambassador in Spain Hugh Elliott include the card’s durability, the ease it can provide in border crossings and that it has a photo, all qualities the green residency document lacks to a greater or lesser extent. You can read more about its reported benefits in the link below.

If you have indeed decided to exchange your old residency document for a TIE, here’s our step-by-step guide on how to do it, as well as some useful advice regarding the process as well as regional differences.

First step – get an appointment

The first step in the process is to go on the cita previa website, choose your province and select the option for the TIE card. This will come up as POLICIA-EXP. TARJETA ASOCIADA AL ACUERDO DE RETIRADA CIUDADANOS BRITÁNICOS Y SUS FAMILIARES (BREXIT). Here, you will be asked to fill out your details and will be issued with a date and time for your appointment. It can sometimes take a few weeks of trying to get your appointment if none are available. In some parts of Spain with fewer Britons you may be able to get an appointment within a matter of days.

However, even if you’re lucky enough to secure an appointment for the next day, this would give you very little time to get the necessary documents together, so give yourself at least a few days to get everything ready and the processes completed. In fact, there’s nothing stopping you from starting with step two before step one to be truly prepared.

READ ALSO: Empadronamiento in Spain: What is it and how do I apply?

Step Three – Going to your appointment

Your appointment will take place at the local police station, where you will need to bring all the necessary documents as described above. This may not necessarily be the police station that’s part of the extranjería office where initial residency applications for Brits are processed, so make sure you take note of the address when booking the appointment.

During the appointment, a police officer or civil servant will check all your documentation and may ask you several questions. Then they will take your fingerprints for processing.

Be aware that even in big cities such as Barcelona, most of the staff do not speak English, so the conversation will most likely be in Spanish, in case you need to take someone along to translate.

If all the documents are in order and you’ve paid your fee, you’ll be issued with a receipt called a resguardo, to say that your application has been successful.

It can take a month or more for your TIE card to be processed. In some regions, you’ll be issued with a notification when it’s ready, while in others you may have to apply for a second appointment to collect your card, after a certain amount of time has passed.

When you go to pick up your TIE card, remember to bring with your resguardo, your passport and your old green certificate, the latter police will most likely keep after they hand you your TIE.

Your fingerprints will be checked again and then you’ll be issued with your new TIE card. Check the card carefully before you leave the station, just to make sure all the information is correct.

READ ALSO: BREXIT: The two mistakes to look out for on your TIE Spanish residency card

Top tips and differences between the regions

Many people have been asking on expat forums for contact details of lawyers and gestores (a type of accountant and legal aid) to help them through the exchange process. This is not really necessary, it’s very straightforward and easy to do compared to initial residency applications for Britons who haven’t previously registered in Spain or for those getting the non-lucrative visa.

Generally speaking, you do not need to pay someone to assist you with this residency document exchange.

Appointments can be hard to come by in many regions across Spain, with many people waiting weeks to get one. This is partly to do with the pandemic, but also because of the number of people trying to apply at once, and Brits applying for residency for the first time. Another reason is that many of the appointments are block booked by gestores or immigration companies who will charge you a fee to get you an appointment.

If you need your appointment urgently, then it might be worth contacting one of these companies, but if not just wait it out and you will eventually get one if you keep trying.

British Ambassador to Spain Hugh Elliott said on May 26th: “The Spanish authorities have recently dedicated more resources to help UK nationals through this process – for example specifically in Alicante, Benidorm and in Torrevieja”.

Some readers in Alicante have told The Local Spain that you will get a notification when your TIE is ready, but that you need to make an appointment to go and collect it.

Our Valencia readers have reported that it takes around three weeks to 30 days for your TIE to be processed there and that you’ll need to go and pick it up. You won’t be notified when it’s ready, but you’ll need to check online here to find out when your number comes up and you can collect it.

Britons in Malaga have reported anywhere from one month to 60 days to exchange their residency cards. You won’t be notified when it’s ready, but may be told when to return to collect it or be given a number to check when it’s been processed.

Readers in the Canary Islands have said it’s not necessary to get an appointment to pick up your card and that waiting times are currently around two months.

UK nationals in the Balearic Islands are saying it takes around six weeks to exchange your green residency card for a TIE, while others are saying one month. The main problems here seem to be the availability of appointments. You also need to get an appointment to pick up your card, which is also taking a long time.

In Catalonia, and particularly in Barcelona, the main issue seems to getting the second appointment to pick up your card. It can take months to be able to get an appointment to pick it up, but keep trying. Some people have reported that new appointments are released on Friday mornings, so that may be a good time to check. Cards must be picked up from the police station on Calle Mallorca, not the one on Rambla Guipúscoa where you go for your initial appointment and fingerprinting.