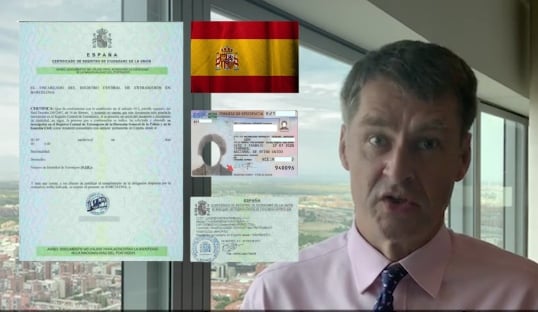 Screenshot of British Ambassador to Spain Hugh Elliott speaking about the new advice for exchanging the old green residency documents (pictured) for a TIE card.

Since the early 2000s, Britons in Spain who registered as residents were issued a green residency document, first it was an A4-sized paper version and later a smaller version, also green and made of paper (which could not be laminated).

Those who had the green residency certificates have since been given the option of exchanging the green document for a TIE card, but Spanish authorities and the UK Embassy in Madrid have stressed that this is “optional” and that the green documents will still be valid after the end of the transition period, so it was up to you if you exchanged or not.

On May 26th however, UK and Spanish authorities have officially adopted a change of stance and are now recommending that everyone exchange their green residency document for a TIE and have outlined several reasons why.

British Ambassador to Spain Hugh Elliott said: “We know that some of you have been having difficulty using it to access services. As was always said, the green certificate is a valid document to prove your residency and your rights under the Withdrawal Agreement in Spain, and that’s not changing. However, both we and the Spanish government would now strongly encourage you to take steps to exchange the green certificate for the new biometric TIE.”

Why are the authorities advising this? Elliott has outlined three main reasons as to why British residents should do this:

So the message is that having a TIE could actually save Brits in Spain time and trouble, especially as not all authorities outside of Spain are necessarily familiar with the old, green residency documents.

Many Britons have been complaining about the lack of appointments available to exchange their cards in places with a high volume of UK nationals such as Alicante.

Some groups fighting for Briton’s rights in Spain have called on UK nationals wanting to process the “optional” exchange to hold off until their fellow countrymen and women registering for the first time as residents get their TIE first, as a means of not clogging up the system.

“The Spanish authorities have recently dedicated more resources to help UK nationals through this process – for example specifically in Alicante, Benidorm and in Torrevieja,” explained Elliott.

He went on to say the exchange process is very quick and that you’ll need to use an online portal you make an appointment at a National Police station in your province.

“Go to your appointment with your documentation,” Elliott continued. “You’ll also have fingerprints taken, then you’ll be given a receipt, a resguardo in Spanish, with a date to collect your new TIE card”. The cost for the exchange is just €12.

In some regions however, such as in Catalonia, it may be necessary to apply for a second appointment in order to collect your card, these could also take a long time to become available.

“You don’t need to prove your income when exchanging a green certificate or when updating from a five to a 10-year TIE, although you may have to prove your continuous residence in Spain”, Elliott explained.

According to the British Embassy, many Brits in Spain who have already done the exchange process have been surprised about just how quick and straightforward the whole process is.

“I would encourage anyone who has not exchanged to take steps to do so now,” concluded Elliott.

Back in December 2020, Spanish authorities began to stress that the exchanging green docs for TIEs could be advantageous, with Spain’s Secretary of State for Migration Hana Jalloul saying: “The Spanish Government would like to keep on encouraging British Nationals to exchange their green residency document for the new biometric TIE card as it may speed up administrative processes and, especially in the current situation regarding border crossings.”