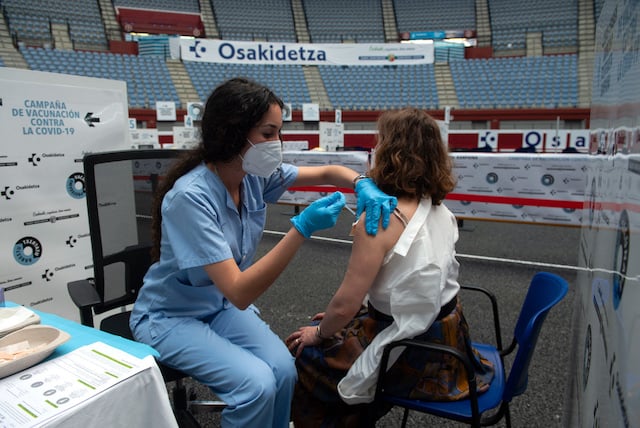 What is the latest on Spain’s vaccine campaign?

According to the Spanish Health Ministry, around 81 percent of people in Spain over 40 years of age have received at least one dose of the Covid-19 vaccine, although there are a significant number of people in the older age groups that are yet to receive their second dose.

In total 35 percent of the total population of Spain is fully vaccinated against Covid-19. Most regions are currently concentrating on vaccinating those in the 40 to 49 age group.

What’s the latest vaccine information for those in the 40-49 age group in Spain?

As each region in Spain is in charge of its own vaccine strategy and they are moving at very different rates. Some regions have already given the first dose of the shot to almost all its 40 something-year-olds, while others are just starting on this age group.

Madrid announced that it would begin to vaccinate those in their 40s on June 9th and hopes that everyone in this age group will have received at least one dose by the end of June.

The Valencia region on the other hand, opened its vaccination appointments for this group on June 7th, but is still far behind other regions. It has only managed to fully vaccinate 9.8 percent of those in this age group.

Andalusia is currently concentrating on vaccinating those in their 40s too and has announced that it will open appointments for those in their 30s on July 7th.

Galicia, the Basque Country and Navarra also started vaccinating those in their 40s earlier this month.

In Murcia, more than 35,000 people between the ages of 40 and 49 have a scheduled appointment to receive their Covid vaccine already.

READ MORE: Catalonia to give Covid vaccine to teenagers and adults under 40 in July Which vaccine will those aged 40 to 49 receive in Spain?

On June 1st Spain’s Health Ministry approved the use of the Johnson & Johnson (Janssen) inoculation for people in their forties, following two weeks of negotiations with the regions and Spain’s Public Health Commission.

The Spanish government had initially announced that for people aged 40 to 49 years (born between 1972 and 1981, both those years included), “the vaccines used will be considered based on the availability, the context of the pandemic and the evidence”.

So finally, it means that the mRNA vaccines – Pzifer, Moderna, as well as Johson & Johnson’s viral vector vaccine will be the ones administered to this age group.

Around 3.7 million Johnson & Johnson vaccines are expected to arrive in Spain over the course of June, compared to 13 million doses of the two-dose Pfizer inoculation. The delivery of Moderna vaccines for June is yet to be confirmed.

Spain began using the J&J vaccine with its 70 to 79 age group and on May 12th extended its use to people aged 50 to 59 and those classified as vulnerable due to health and other conditions (all ages).

“Since this vaccine only requires one dose, it has important advantages for its use from the point of view of feasibility and efficiency of health resources for certain groups that are difficult to reach and vaccinate, either because they’re not in the health system (for example, homeless people), or due to the need to send healthcare personnel to private homes, or because they are groups that can’t go the health centre due to other reasons (certain work activities, such as workers at sea, NGO workers who travel to high-risk areas), ” Spanish health ministry sources explained.

“The main priority at this time is to extend vaccination in an agile way by age groups to ensure that all people are vaccinated in the shortest possible time,” representatives of Spain’s Public Health Commission have said.

Covid-19 vaccine for under 60s in Spain: What you need to know