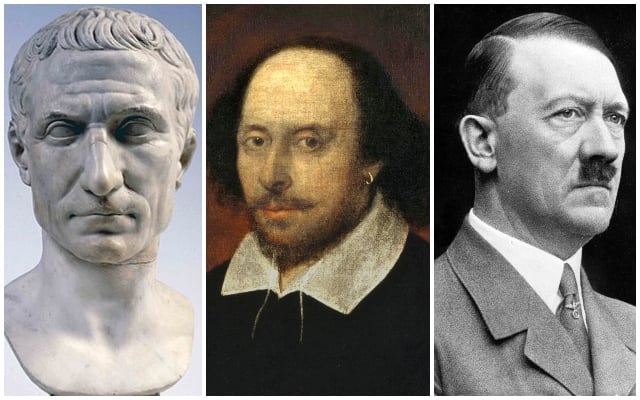 Julius Caesar, William Shakespeare and Adolf Hitler all had an opinion about Spain: Images: Wikipedia

“Damn Spaniards for whom drinking is living” – Julius Caesar

The Roman emperor arrived in Hispania in 69 BC and was obviously impressed by a Spanish habit that still rings true to this day. Socialising in Spain still revolves  around having a round of cañas (small beers) outdoors with friends, but it’s more about the experience than about the drinking. “I would sooner be a foreigner in Spain than in most countries. How easy it is to make friends in Spain!” – George Orwell

The famous British author held Spanish people in high esteem after he volunteered for the Republican cause against Franco during the Civil War. His experiences in the trenches, the anarchist movement and revolutionary Barcelona would form the basis for his 1938 book ‘Homage to Catalonia’. Photo: Wikimedia “There is no nightlife in Spain. They stay up late but they get up late. That is not nightlife. That is delaying the day.”– Ernest Hemingway

The legendary American writer spent some of his happiest and most productive years in Spain, and he obviously had his own take on the Spanish way of life. Another of Hemingway’s famous quotes about España is “For one person who likes Spain there are a dozen who prefer books on her”. The American Nobel Laureate would set several of his novels and short stories in Spain and return to the country dozens of times from the 1920s, throughout the 1930s when he covered the Civil War, up to his final visit in 1960. “Africa starts at the Pyrenees” – Napoleon

This quote is widely attributed to the iconic French military man, although it was initially thought to have been his countryman writer Alexandre Dumas who uttered the words, but he also reportedly denied it. Either way, the quote has gone down in history as a pejorative way for Spaniards’ Gallic neighbours north of the Pyrenees or other Europeans to classify Spain as backward, due to its proximity to the African continent.

There are other damning quotes about Spain attributed to Napoleon such as his referral to its people as “riffraff villagers led by riffraff priests” and “Spaniards like to complain about their country and their institutions, but they don’t allow foreigners to do so”.  Some may say that the latter quote still has some truth to it today, but even if the veracity of these words cannot be 100 percent confirmed, there’s certainly reason to believe that the Corsican leader may have had a bee in his bonnet about l’Espagne as it’s here where his empire started to crumble. “All curious travellers keep Granada in their hearts, even without having visited it.” – William Shakespeare

Granada has been revered by international artists and writers throughout the ages, from French painter Henri Mattise to Spanish poet Federico García Lorca.

Shakespeare is also widely quoted as being an admirer of the Andalusian city. In this book Shakespeare and Spain, H. Thomas argues that England’s most famous writer may have spoken Spanish fairly fluently and been influenced by the country’s literature. “Bullfights aren’t a form of sport, they are a tragedy. A bullfight is a tragedy in three acts. These noble creatures, who are waiting for their death this afternoon are the heroes of that tragedy. The tragedy of the bullfight is based on the innocence of this creature. Of course, his innocence, his perfect virginity, is the basis of the tragedy of the bullfight,” Orson Welles.

The American filmmaker and actor was a huge admirer of Spain, making several movies in the country and having his ashes scattered near Ronda. Welles is also quoted as saying “If I could choose a place to live it would be Spain and specifically Ávila . The climate is horrible, very hot in summer, very cold in winter. It is a strange and tragic place. There is something great there.” “No way, the Spaniards once ruled the world, they are the only truly brave Mediterranean people. You can’t enter Spain without permission from the Spanish,” Adolf Hitler

Did the Fuhrer really say those words when his generals suggested they invade Spain? Well they’re widely attributed to him, so much so that a Toledo councillor for far-right party Vox quoted Hitler in reference to how Spain wouldn’t allow Covid-19 to ‘invade this brave land’.

Many of these quotes linked to the Nazi leader were verbal rather than written, making it harder to trace their origin, but in the book “Hitler’s Table Talk 1941-1944: His Private Conversations” historian Hugh Trevor-Roper wrote that Hitler referred to Spaniards as “lazy”, of “moorish blood” and in love with “the greatest whore in history”, referencing Catholic Queen Isabel.

According to Spanish daily ABC, on another occasion Hitler said it “impossible not to love Spain”. It’s almost as if the German Third Reich leader had a few screws loose. Hitler and Franco at Hendaye train station on the French-Spanish border in 1940. Photo: AFP

“Spanien, das schöne Land des Weins und der Gesänge,” wrote the 18th century poet and novelist about his love of the Spanish lifestyle, although Goethe is famous for being an even bigger admirer of Italy. “Here we found men, women and children,” said Ignacio Lorenzo, a 70-year-archaeologist as he exhumes the last skeletons from a mass grave in this village in the northern region of Aragon.

“Their crime was to have voted for left-wing parties or to be members of a union,” he said.

The siege of Belchite was part of a Republican offensive in 1937 to capture Zaragoza, the capital of Aragón, from the Nationalists led by General Francisco Franco.

Franco went on to win the war and establish a dictatorship that lasted until his death in 1975.

The repression of Belchite by Nationalist forces at the start of the war resulted in the execution of 350 of its roughly 3,000 residents, according to witness testimony from survivors.

The grandparents of veteran Spanish singer Joan Manuel Serrat were among those killed.

Lorenzo and his team have so far found the remains of 90 missing Republicans in the cemetery, some of them with their hands and feet bound. Others displayed signs of having been tortured.

British historian Paul Preston, author of “The Spanish Holocaust”, estimates that 200,000 Spaniards were killed far from the front lines — 150,000 in areas controlled by Franco’s forces and the rest in Republican areas.

Franco’s regime honoured its own dead, but left its opponents buried in unmarked graves scattered across the country.

His government has drafted a law that, for the first time, will make exhumations of those who disappeared during the war a “state responsibility”. The bill faces its first parliamentary vote on Thursday. 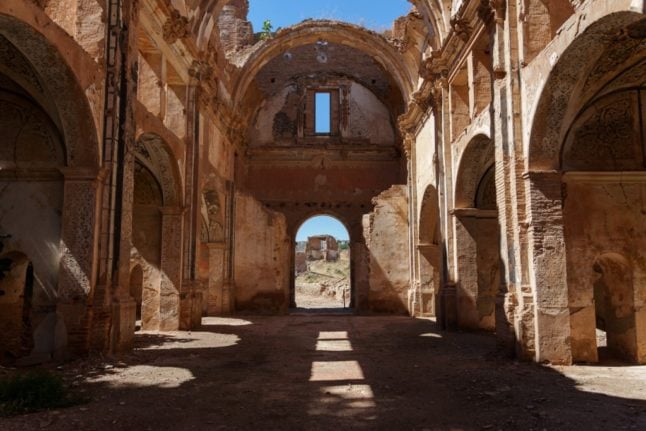 Belchite was devastated during “the Battle of Belchite” in the Spanish civil war in a series of military operations confronting loyalist Spanish republicans and General Franco’s nationalists forces between August 24th and September 7th 1937. (Photo by CESAR MANSO / AFP)

Belchite was captured by Franco’s forces shortly after the start of the war, then taken over by the Republican camp a year later before being recaptured by the Nationalists.

The fighting left at least 5,000 dead and completely destroyed the village.

After the war, Franco visited Belchite and ordered it to be abandoned and preserved in its ruined states for propaganda reasons. A new village was built next door for the surviving residents.

The ruins of Belchite are now fenced off and can only be visited via a guided tour. 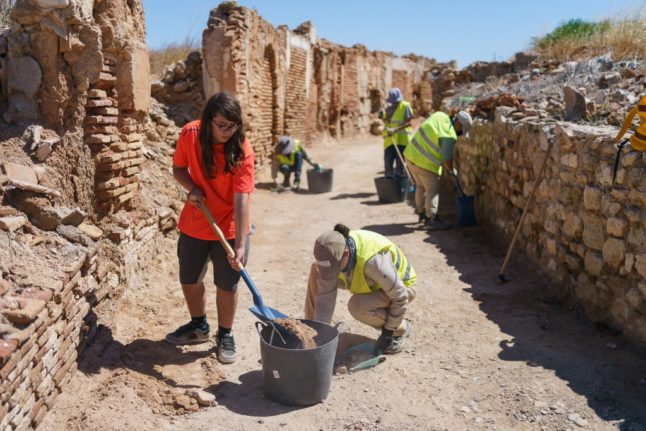 Volunteers from several countries work to clean up and restore the streets of the old town of Belchite. (Photo by CESAR MANSO / AFP)

“A rupture took place after the civil war, the past was left behind,” said Mari Angeles Lafoz, a socialist councilwoman in Belchite.

Domingo Serrano, the mayor of Belchite between 1983 and 2003, strove during his mandate to preserve what was left of the old village but lacked any real means.

He himself was born in 1946 in “old Belchite”, in one of the few houses that had survived the war.

“We let it go downhill,” said Serrano. “It’s as if we thought it was better to forget it.”

But the €7 million ($7.0 million) recently earmarked by the government for “old Belchite” were coming “40 years too late,” he said. 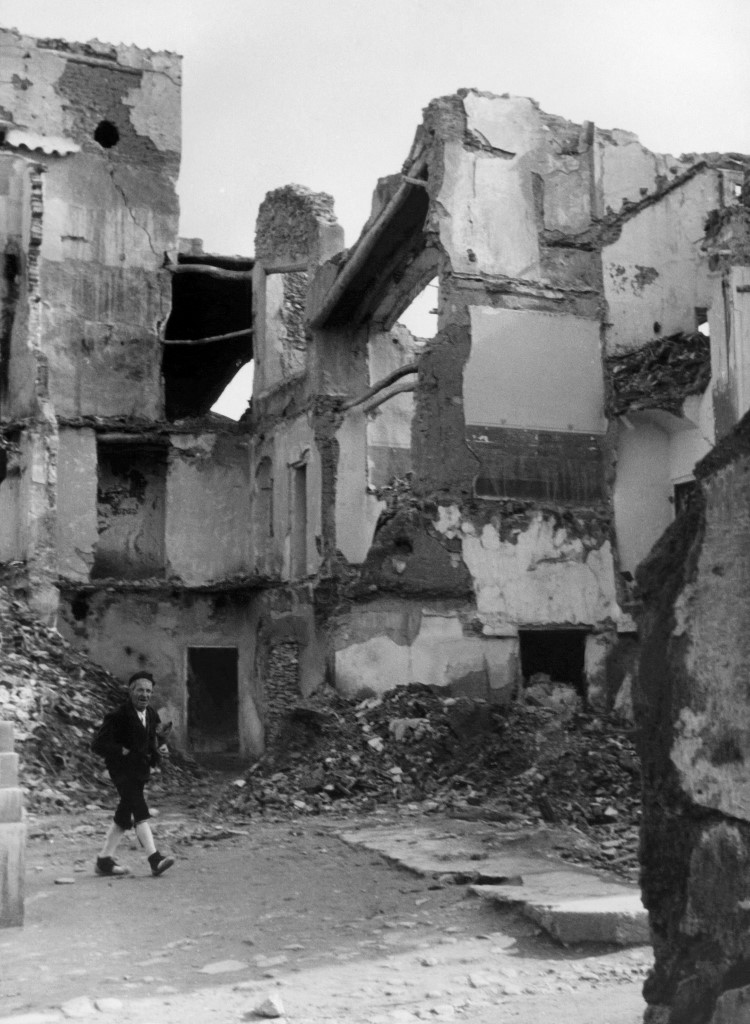 View of the village of Belchite, south of Zaragoza, which was totally destroyed in battle in August 1937. Following the battle Franco ordered that the ruins be left untouched as a “living” monument of war. (Photo by CIFRA / AFP)

The ruins of Belchite — which include a cathedral pockmarked with bullet holes and gouged by mortar shells — were visited by 40,000 people in 2019 before the Covid-19 pandemic disrupted travel.

It has been dubbed “Spain’s Pompeii”, after the Roman city frozen in time when it was buried under ash from a volcanic eruption in 79 AD, said archaeologist Alfonso Fanjul.

The 48-year-old president of the Spanish Association of Military Archaeology heads a team of volunteers from around the world who clean and restore the village’s original cobblestones.

“I think it’s really one of the only places in the world that can this starkly remind you of something that has happened like this,” said one volunteer, Ellie Tornquist, a 24-year-old student from Chicago in the United States.

But the civil war continues to divide Spain.

While leftwing parties want to rehabilitate the memory of the Republican victims of the conflict, the right accuses them of seeking to open the wounds of the past.

The current mayor of Belchite, Carmelo Pérez of the conservative Popular Party, admits the war is a “very sensitive issue”.

But the village “is a unique place in Spain” where we can “restore dignity” and create a place of peace, he said.