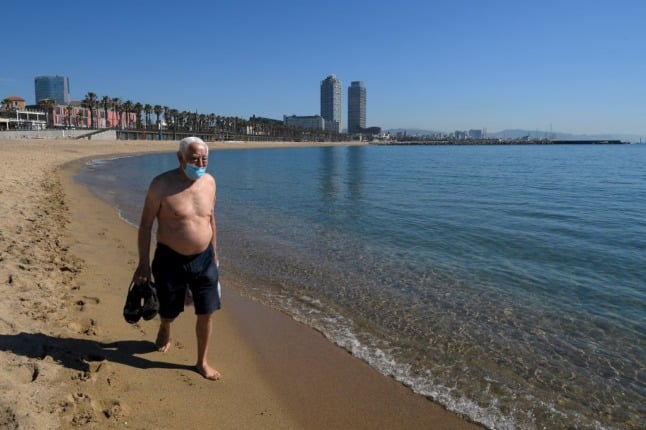 Face masks have been compulsory in public in Spain since May 21st 2020 and since March of this year you are required to wear them in almost all indoor and outdoor settings even if you’re sticking to the safety distance, unless the activity is incompatible with mask wearing ie. eating, drinking, sunbathing, running etc

But with the vaccine campaign that’s underway in Spain and globally, politicians and scientists are now weighing up the pros and cons of keeping the mask at-all-times rules.

Back in April, the EU called for mask wearing among vaccinated people to be reconsidered in Member States.

In the United States, the Centres for Disease Control and Prevention (CDC) have recently advised that fully vaccinated people don’t need to wear masks outdoors nor in most indoor spaces.

The same questions regarding the benefits of masks in outdoor settings for preventing Covid infections are now being asked in Spain.

Catalonia is the latest region to say it will study “in the coming weeks” the possibility of not making masks obligatory outdoors once they have reached certain vaccine targets.

“Based on the knowledge acquired in other countries and the evolution of the pandemic, it will undoubtedly be a debate that we will have on the table in the coming weeks,” Regional Health Secretary Marc Ramentol told local radio RAC1.

READ ALSO: What are the restrictions after the state of alarm in each region of Spain?

Galician President Alberto Núñez Feijóo has also said that if people in the northwestern region continue to behave “with the caution that the situation requires”, masks won’t be required outdoors in two months. So far, 43.6 percent of people in Galicia have received at least one vaccine.

But for Spain’s national Health Ministry, in order for people to go mask-free outdoors, at least 50 percent immunity among its population must have first been achieved.

For indoor mask legislation to be reconsidered the widely quoted 70 percent immunity target has to be met first, which according to Prime Minister Pedro Sánchez will happen in just over 90 days in late August.

Spain’s Health Emergencies coordinator Fernando Simón has also said that it was “common sense” to modify the outdoor masks rules and added that the regions were already in discussions with Spain’s Health Ministry.

However, some regional authorities such as Valencia and Andalusia prefer to remain cautious and maintain current outdoor mask rules until more people are vaccinated, even if it means enduring the outdoor summer heat in those regions with a mask on.

What do the experts say?

There’s a mixture of opinions, with some saying wearing masks outdoors doesn’t make enough of a difference to lowering infections, and others saying Spain shouldn’t jump the gun and wait to achieve more immunity among its inhabitants.

Last March, 100 Spanish virologists and other scientists signed a letter discouraging outdoor mask usage by arguing that the chances of getting infected with Covid-19 are 20 times lower outdoors than indoors.

But for other leading Spanish virologists such as Amós Rodríguez of the Spanish Vaccination Association, it’s still too early to consider the easing of mask measures.

“In Spain we are starting to go into cruise control in terms of vaccinations, but we still have a long way to go to achieve reasonable immunity that allows us to consider detaching ourselves from the barrier tools we have lived with for most of the pandemic.

“At this moment it is not a debate and it should not be.”

Spain has had some of the strictest mask rules in Europe since the start of the pandemic, requiring masks in all indoor and outdoor spaces for almost a year now.

Other countries such as France and Italy have adopted similar measures whereas Scandinavian nations initially or still make mask usage voluntary. In the UK, masks have to be worn in indoor settings but not outdoors.

In March, Spain made international headlines when it decided to make masks compulsory in all public settings for all people aged 6 and over even when the safety distance of 1.5 metres was being met (with the exception of people with health problems).

Even if Spain does end up easing mask legislation in certain settings, it’s unlikely that we’ll see a blanket lifting of the rules overall, even when the country’s 70 percent immunity target is met.

In indoor areas with poor ventilation, it could be that masks remain compulsory even once Spain puts the worst of the pandemic behind it. This is España after all, the land of packed taverns, heaving squares during local fiestas and busy public transport.

READ ALSO: Why are masks still compulsory in Spain if the state of alarm is over?