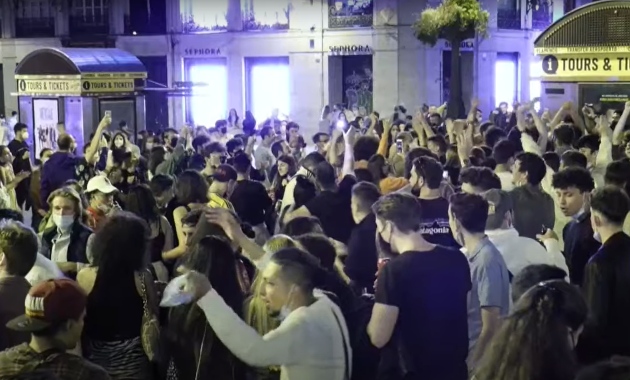 Singing, dancing and because this is Spain after all, street drinking in the form of so-called botellones.

This was the scene in Madrid, Barcelona, Salamanca, Seville and Bilbao over the weekend and in particular on Saturday night, when the country’s nationwide state of alarm came to a close.

This theoretically also spells the end of many Covid restrictions, including the curfew, early closing hours and regional border closures – which is the main reason behind all the celebrating – even though many of Spain’s autonomous communities are working on keeping restrictions.

In the capital’s emblematic Puerta del Sol on Saturday night, the packed square resembled pre-pandemic New Year’s Eve celebrations, with revellers shouting “Freedom!” (the anti-restrictions slogan of the newly elected regional president Díaz Ayuso), pulling down or not even wearing a mask and generally forgetting that the pandemic is still ongoing.

Other Madrid squares such as Chueca, Dos de Mayo or Malasaña held similar improvised and uncontrolled outdoor parties until police stepped in to break up the crowds.

“I was fed up with not being able to get out of Madrid,” jewellery designer Blaca Valls told AFP on Saturday, echoing the relief of many partygoers over the easing of restrictions.

“I felt frustrated, locked down, with no freedom,” added the 46-year-old, who plans to go to Galicia, in northwest Spain, next weekend to celebrate a birthday.

The scene was largely the same in Barcelona, where hundreds of young people celebrated with dancing and singing at an improvised party held in the city centre, as the country lifted a state of emergency precisely at midnight.

Maybe not such a good idea to end the curfew all at once 🤷🏼‍♂️ #Barcelona #EstadoDeAlarma pic.twitter.com/jvdxuVBqlK

“We came to see the atmosphere and it seems to be a bit like New Year’s Eve; we waited until midnight to be able to go out in the street and see if there were really a lot of people or not. And obviously there are a lot of young people celebrating,” community manager Oriol told AFP.

“It feels amazing,” a French student in Barcelona added.

“We’ve had to stay confined in our homes and neighbourhoods for so long.”

In the Basque cities of Bilbao and San Sebastián, smaller groups of youngsters stayed out past the previous curfew time to celebrate the end of the state of alarm, which local Ertzaintza police broke up.

In the student city of Salamanca, the scenes of unrestrained revelry were much the same.

“The end of the state of emergency does not mean the end of restrictions. Far from it. The virus threat still exists,” Justice Minister Juan Carlos Campo wrote in an opinion piece in El Pais daily.

After more than six months of curfews and a ban on travel between Spain’s 17 regions under a state of emergency which was imposed in late October, it seems that in principle Spaniards will be afforded new freedoms now that the measures expired on Sunday.

But the images of hundreds of people joyfully celebrating in the streets of Madrid, Barcelona and other Spanish cities without masks or social distancing made Monday’s front pages and has sparked much debate online.

“We still have a very high infection rate” of 200 cases per 100,000 inhabitants in the last 14 days, and “the vaccination is not sufficiently extensive” yet, epidemiologist and ex WHO adviser Daniel López Acuña told Telemadrid.